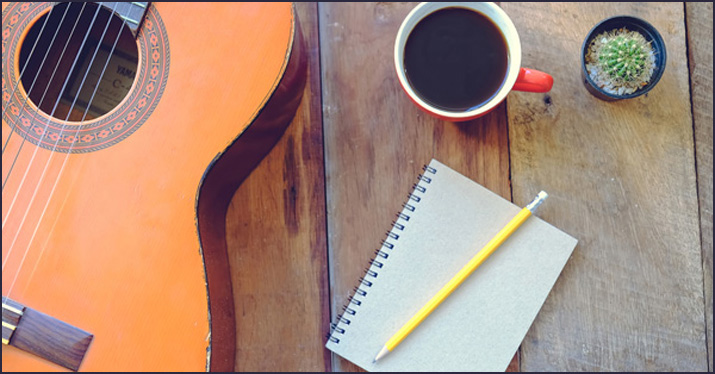 We’ve posted songwriting tips that cover music theory, the use of interesting (and basic) chords to spice up your songs, lyric writing advice, and ways to channel creativity. We’ve collected a bunch of the posts here – check ’em out!

Mystery chords: “A Hard Day’s Night” and “London Calling”
Ever sit down to learn a song and find that no matter what chord you play, it’s just not right? We investigate two mystery chords in two classic songs.

When the bassline makes the song
There are lots of examples where the bassline is the prominent part of the song. This driving blues track from Gov’t Mule rages atop a super-dense bassline that propels the song.

Things every lyricist should know
If you are a lyricist, or if you write melody but your strength is with lyrics, this is for you. These songwriting tips are more about mindset, so they’ll be helpful no matter what your thing is.

The major mediant chord can add an unexpected surprise
While the mediant isn’t as structurally integral as the tonic, dominant, or subdominant, employing its major variation can provide a surprise that will make listeners’ ears perk up.

Can you write a song with just one chord?
While it might be difficult to keep a song interesting if you limit it to one chord, it can help create tension, highlight your lyrics, or drive a hypnotic groove.

Can you write a song with just two chords?
These songs from decades past show us that you can do a lot with just a little. Let’s explore the magic of the bVII-I progression and how two chords can make a song.

Finding inspiration for your songs
Songs can be about anything, so why not look in unconventional places and use creative techniques to find the creative spark your next song needs?

What you can learn from the Trans-Siberian Orchestra
The symphonic metal mashup of “Carol of the Bells” and “God Rest Ye Merry Gentlemen” holds songwriting lessons that can elevate music of any genre.

Liven things up with eleventh chords
Eleventh chords can provide lush texture to your songs, but they can be confusing. We’ve got charts and real-world examples to help you better understand these extended chords.

Eleventh and thirteenth chords: How to play them on guitar
For some extended guitar chords — like a fully voiced thirteenth — there are more notes in the chord than there are strings. That’s where slash chords come in… with a little help from your bassist.

Cry when you write, dance when you produce
Johnny Dwinell and Brent Baxter lean on some sage advice Brent got from veteran songwriter Ralph Murphy. Excerpted from The CLIMB podcast, “Advice That Changed My Songwriting Career.”

Songwriting Dos and Don’ts
At a “Play For A Publisher” event, Brent Baxter and Johnny Dwinell hosted Stacey Willbur, VP of Publishing and A&R for Full Circle Music. Ms. Willbur shared her feedback about the songs that were showcased, and the boys break down some of her “knowledge bombs.”

Become a student of the songwriting craft
I want to talk to you about the number one reason why music artists fail, and I’m gonna be blunt about it: their songs aren’t good enough. Maybe these songwriting tips can help.

How to find the next chord in the progression
For those times when you’re writing a song and can’t find the right chord to complete a progression, this technique — using applied music theory — will help you discover your best options and help you complete your song.