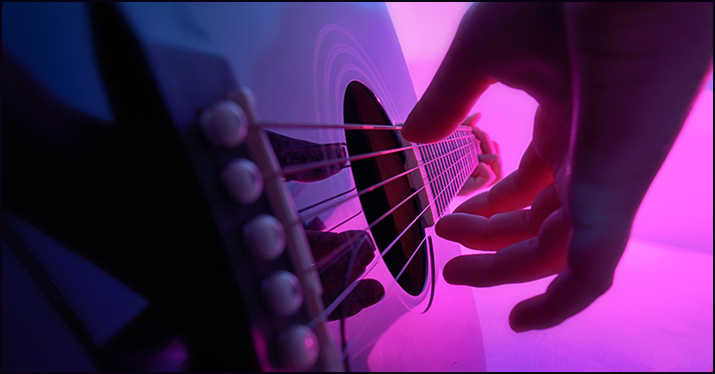 While it might be difficult to keep a song interesting if you limit it to one chord, it can help create tension, highlight your lyrics, or drive a hypnotic groove.

As much attention as we’ve devoted to exotic chords, substitute chords, and chord progressions on this blog, I’d like to acknowledge one amazing truth: you can create an outstanding song with just one chord. In fact, some of the most famous songs from the past 50 years are one-chord songs.

I’ll highlight examples of one-chord songs and offer up some lessons you can learn from them with the hope that this will inspire songwriting ideas for you.

If you have ever tried writing a one-chord song, one of the things you’ll quickly discover is that it’s hard to make the song interesting. By using only one chord, you’re severely limiting the notes one can euphonically sing. And using only one chord eliminates one of the core tropes of western music, tension and release, which can lead to static, boring music.

So why even bother?

Well, aside from simply trying a fun songwriting exercise, using only one chord does offer some rather interesting musical experiences. By violating that trope of tension and release, you can create a song that is nothing but tension, which can complement your lyrics and/or themes, or a song one that becomes a hypnotic tour de force, or one that creates a groove that just won’t quit.

As we’ll see, some songs are so engaging and wonderful, you might not have even noticed that they feature only one chord.

Why even bother with an entire three-note chord, when one note will do just fine? At least, that’s the concept behind much Indian classical music. Monsoon’s “Ever So Lonely” (1982) starts off as a classical raga but soon turns into a pop music gem, which does, in fact, feature an entire major chord.

Going in a different artistic direction is Nico, who created several songs around John Cale’s droning viola. On “All That Is My Own,” Nico and Cale use droning D and A notes to create an oppressive, paranoid atmosphere, which serves her vocals and lyrics beautifully.

Cajun music often features drones as well, which can create an infectious dance groove,
as we can hear in “One Step De Lacassine” by Nathan Abshire & The Rayne-Bo Ramblers.

There are many songs that are built around repeating riffs that, even though they are centered around one chord, creating an illusion of harmonic movement. A lot of blues, funk, and R&B songs are based around repeating riffs. One example is “Smokestack Lightnin’,” by Howlin’ Wolf. The riff never changes, but what keeps the song interesting is the way Wolf sings around it, attacking it from all angles. As the song progresses, the fact that there’s no harmonic shift makes the song take on the aspect of the train that won’t stop in spite of the singer’s pleading.

Another bluesy one-chord vamp built around a riff is Creedence Clearwater Revival’s “Run Through the Jungle.” Again, the unrelenting lack of harmonic movement emphasizes the terror expressed in the lyrics.

These genres feature many songs that build off the blues’ notion of one-chord vamps, though because these songs feature so many instruments and backing vocals, unless you’re paying attention, you might not even realize there’s no real harmonic movement.

Although the keyboard in “Shotgun” by Junior Walker & the All Stars occasionally hints at other chords, the guitar plays a steady Ab7 throughout.

“Chain of Fools” by Aretha Franklin is another one where there’s so much going on (and so many drastic changes in dynamics and instrumentation), you’d be forgiven for not realizing there’s only one chord.

“Electric Avenue” by Eddie Grant is another example of a song that covers up its lack of harmonic movement with numerous distractions (sound effects, keyboard bleeps and bloops, etc.)

All you need is a killer bassline and you can let the rest of your band go wild. At least, that’s the lesson I get from the one-chord-wonder that is “Thank You,” by Sly and the Family Stone.

The Temptations show you can create a 12-minute epic around one chord — and have it be a #1 hit. (I’m including the 7-minute version here, only because the video is better.)

Although thought of as more of a reggae song, “Get Up, Stand Up,” is clearly heavily influenced by American funk. The insistence on staying on one chord matches the intensity of the message.

Hopefully, these examples have shown you how varied and interesting one-chord songs can be. If you’re looking to create a hypnotic groove or seeking a musical way to complement or intensify your lyrics, try playing one chord and see where it takes you.

Related Posts
Can you write a song with just two chords?
Liven things up with eleventh chords
Use substitution chords to spice up your songs
How to find the next chord in the progression when writing a song
Alternate guitar tuning can inspire your songwriting

4 thoughts on “Can you write a song with just one chord?”