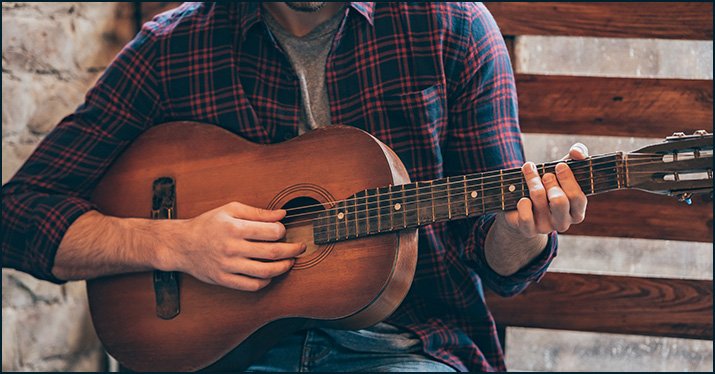 While Nashville tuning uses the same notes as a standard guitar tuning, used by itself and in layers with other guitars, this tuning can bring an articulate presence to a recording.

Though it’s a bit of a misnomer, the Nashville tuning offers a great way to spice up your recordings and help you generate new ideas for your songwriting.

What is Nashville tuning?

Sometimes referred to as “high-strung guitar,” the Nashville tuning isn’t actually an alternate tuning (the guitar is still tuned to E-A-D-G-B-E), it’s a six-string guitar strung only with the high strings from a 12-string guitar string set. This means a Nashville guitar only has a one-octave range instead of a standard guitar’s two. This seeming disadvantage can be exploited in several interesting ways, but we’ll get to that.

Which guitars are best to use?

You can string any guitar to Nashville tuning, but it sounds best on three-quarter-sized or backpack guitars — guitars with smaller bodies that are built to provide a lot of high end. My advice would be to take any cheap guitar you have lying around gathering dust and string it to Nashville tuning so it’s always there in case you need it.

DO NOT USE REGULAR STRINGS FOR NASHVILLE TUNING or you’ll snap your neck in half. As mentioned earlier you can use the high strings from a 12-string set or you can buy a set of Nashville strings, which tend to be an even lighter gauge. (The D’Addario EJ38H is a popular set.)

Why use Nashville tuning?

The first reason to try anything different with your guitar is that it can be an easy way to discover new sounds, which can help generate song ideas. Johnny Marr, who used this tuning on several Smiths songs, said it felt like he was playing the guitar upside-down. Chords or voicings that would normally sound poor on a standard-tuned guitar can sound great on a Nashville guitar.

(My advice: start recording the very first time you try playing with a Nashville guitar, as you’re likely to stumble onto some cool ideas right off the bat and you’ll want to capture as much of that as possible.)

Aside from being a fun way to generate ideas, Nashville tuning is mostly used for recording.

One advantage of the limited range of a Nashville-tuned guitar is that, because it lacks the mid-range, it is unlikely to clash with other instruments or voices. You can get a nice bright guitar sound without worrying about muddying up your mids.

Many engineers and artists like to layer a Nashville with a standard guitar to create a virtual 12-string sound. (You are playing exactly the same strings tuned exactly the same way as one 12-string guitar.) The advantage of using two guitars to create the sound of one is that it gives you more freedom to play with the sound. You can pan the guitars left and right. You can raise or lower the levels to create the sound you want. And you can add effects to just one of the guitars to create sounds that would be hard or impossible with just one 12-string.

“Free Fallin’” by Tom Petty is one of the more famous songs to use both standard and Nashville tunings. Here’s a video showing how layering several kinds of guitars contribute to that song’s sound while showing off some of the fun things you can do with acoustic and electric Nashville guitars.

Other songs that use Nashville tuning include:

Using a capo — especially placed high up on the neck — you can create a kind of fake mandolin sound that can really add a beautiful chiming quality to your music.

I haven’t found anyone else doing this, but back in my shoegaze phase, I used an electric Nashville guitar whenever I wanted to get a swirly, My Bloody Valentine guitar sound. I don’t believe MBV used Nashville guitars, but I found that by strumming while holding the tremolo created an excellent sound that didn’t get too muddy, no matter how much distortion I put on my guitar.

For Pink Floyd’s “Hey You,” David Gilmour uses a high E string on the bottom as well as the top.

You can tune your Nashville-strung guitar any way you want, so why not try out an open tuning? Combine an open-G-tuned-Nashville-guitar with a slide and see what kind of crazy sounds you can get. (Be careful not to tune to too high on the D and G strings. They seem to have the most tension on a Nashville guitar, so they might be the most likely to break if you were to tune them up to F or B, respectively.)

Try out various kinds of picks. Thin picks give an airier sound; thicker picks will give you more jangle.

Just like any kind of non-standard tuning, the Nashville tuning system can unlock your creativity and challenge the way you play the guitar. Already have a recording of you playing with the Nashville tuning, tried it out and had interesting results? Let us know in the comments below!

3 thoughts on “How Nashville tuning can transform your arrangements”