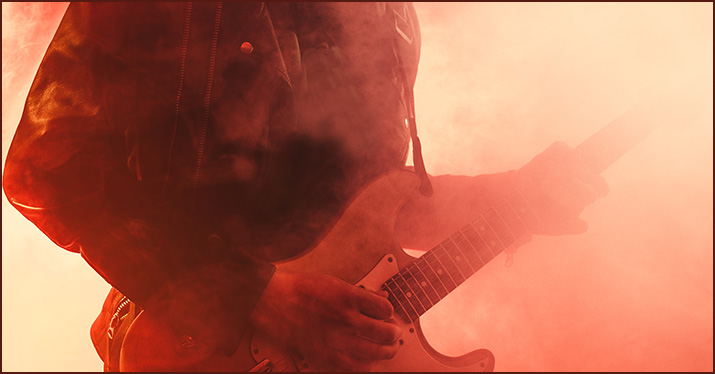 Suspended chords work as substitution chords, can smooth out chord progressions, and add tension to your music. Here are some great examples of how to use suspended chords in your songs.

About 30 seconds after learning how to play a D chord on a guitar, most beginners are likely to discover the joy of adding their pinky finger to the third fret of that high E string, thus creating a Dsus4. The next thing they’re likely to learn is that by removing all fingers from that E string, they can play a Dsus2 chord. And about a millisecond after that, they discover that vacillating between a D, Dsus4, and Dsus2 is a lot of fun.

But suspended chords offer more than just being a little frilly something to add to your music. They work as interesting substitution chords, they can smooth out chord progressions, and they can add unexpected tension to your music.

A suspended chord is neither major nor minor because the third has been replaced with either a fourth or a second. For example, a Csus4 is spelled C-F-G, and a Csus2 is C-D-G. But the question still remains, “when do you use suspended chords?”

Another way to use suspended chords is to borrow a trick from classical music. In classical compositions, a suspended chord features a note that is held over, or suspended, from the previous chord. So, for example, rather than use the progression C, G, C, a composer might want to hold on to the tension a little longer and linger on that C note, using this progression: C, Csus2, G, C. This might be voiced: C-E-G, C-D-G, B-D-G, C-E-G. Here, suspending that note adds a yearning tension.

This trick can also be used to smooth out progressions that might otherwise feel awkward. Take “(They Long to Be) Close to You,” written by Burt Bacharach and Hal David. The chord progression over the melody essentially goes from C (technically, Cadd9) to B. If you play those two chords and try to sing along —

Cadd9     B
Why do birds suddenly appear

— you’ll notice how harsh the progression seems. So what Bacharach and David do instead is to suspend the E from that C major chord over to the next chord —

— and suddenly the progression feels great.

(What’s more, the very next chord is a B minor, so that suspension highlights some nice chromatic movement, E to D# to D.)

Although few would classify suspended chords as especially dissonant, they certainly feel unresolved, and people really want them to resolve. This can add urgency to your music without including chords that people might feel are “unpleasant.”

Knowing this, you can play with people’s expectations and create some nice tension. For example, this progression:

People want that initial Gsus4 chord to resolve, and when it does, it’s very pleasing. When you hit them with that next suspended chord, in this case Dsus4, they are doubly expecting it to resolve, since you gave them that expectation already. If you were to refuse to resolve that chord, you leave people hanging. Match that emotion with your lyrics and you can create something very powerful.

Substituting a suspended chord for a major chord — and not resolving it — is a neat trick that can make a mundane progression sound fresh. For example, replace a G chord with a Gsus4: C, Am, F, Gsus4, C.

Suspended chords can be expanded beyond simple triads. Just add a seventh note and you’ve got a fresh approach to a dominant chord. So, a C7sus4 would be voiced: C-F-G-Bb.

Maybe the most famous use of a 7sus4 chord is in “Hey Jude.” You can hear a C7sus4 briefly on the word “song” in the first verse. Interestingly, Paul leaps up to that fourth note (from a Bb to an F in this case), which feels sadly uplifting and fragile (perfect for the words, “take a sad song and make it better”).

You often hear dominant 9sus4 chords in jazz. We build them the same way we build sevenths: C-F-G-Bb-D. Once you start getting into these extended chords, however, they start to lose their identity as suspended chords and start to sound more like eleventh chords.

You can hear a gear 9sus4 chord at the end of the phrase “mellow as the month of May” (at 0:30) in this great Carol King hit.

I’ll leave you with two great songs that feature prominent suspended chords. First up is the Zombies, who used them all the time. In “Care of Cell 44,” they use parallel suspended 4th chords (Bbsus4 to Asus4), which you first hear during the phrase “while you are far away” (0:13).

So now that we’ve looked into this chord type hopefully you have a better understanding of when to use suspended chords in your songwriting.

Related Posts
How Nashville tuning can transform your arrangements
Eleventh and thirteenth chords: How to play them on guitar
Using augmented chords in your songs
Sixth chords add moody complexity to your music
Songwriting tips: Insights and advice on the craft of writing a song

One thought on “Using suspended chords in your songs”