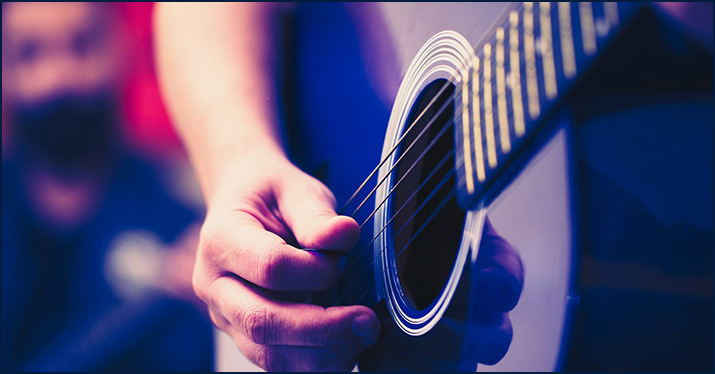 For some extended guitar chords — like a fully voiced thirteenth — there are more notes in the chord than there are strings. That’s where slash chords come in… with a little help from your bassist. 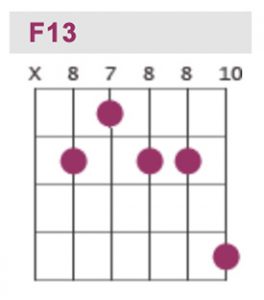 My recent post about livening things up with eleventh chords sparked the not-unreasonable question: “And how does one finger these chords on a guitar?” I get it. Some of these crazy jazz chords can be intimidating for guitarists — especially when you consider that a fully voiced thirteenth chord consists of seven notes and most guitars only have six strings. And even if you leave some of the notes out, you’re still facing weird shapes, like this F13, that can make your head spin.

And that’s for a standard dominant thirteenth. What if you want to play a minor thirteenth chord? Here’s what a Cm13 looks like (screenshot from www.yourguitarchords.com).

Good luck with that one! Of course, there are other voicings, which can be easier to play, but my point stands: some of these chords are seemingly too hard to play on guitar. 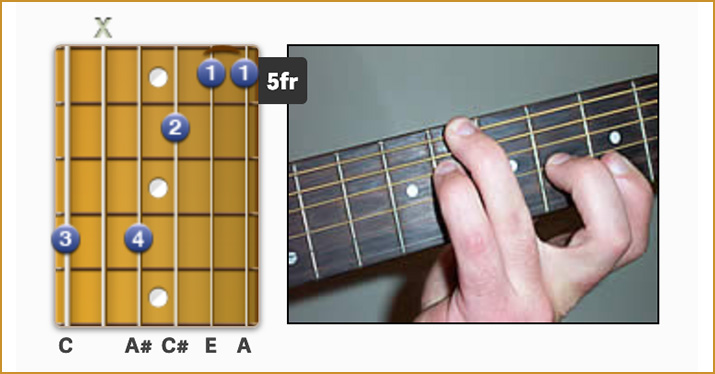 And what if you’re playing a ukulele? How are you supposed to play 5, 6, 7 note chords on a four-stringed instrument?

It’s easy — especially if you’re playing with other musicians. You cheat. You play slash chords instead.

OK, I covered slash chords a while back (“Brian Wilson’s songwriting tricks and techniques“), but here’s a quick refresher.

A slash chord is simply a chord where the bass note is something other than the root. A typical slash chord you might see is D/F#, which means you’re playing a D major chord with an F# in the bass (also known as the first inversion).

Things get more interesting, however, when your slash chord features a bass note that isn’t in the triad. Take A/B, for example, as found in “California Girls” by the Beach Boys. An A/B is an A major chord with a B in the bass. B is not in an A major chord, so what kind of chord is that exactly? We’ll get to that, but first, let’s look at how to build extended chords.

How to build extended chords

Generally speaking, chords are built by stacking thirds. For a major chord, you stack two thirds on top of each other (e.g. C-E and E-G). If you want a seventh chord, stack another third on top of that (G-Bb). For a ninth chord, add another third (B-D), etc. See the red notes in the chart below.

If we play all of those red notes, we’ll have ourselves a Cmaj13 chord. To make this a dominant (C13), we simply flatten the 7th note:

That’s a lot of notes — too many to play on guitar. The good news is we don’t have to play all of those notes for the listener to perceive our chord as a thirteenth (or an eleventh or ninth).

When people hear a bass note, they assume all the other notes above the note are related to that bass note. If, for example, you were to play Eb-G-Bb on your guitar, people will hear that as an Eb chord. If your bassist plays a C note, that chord (which we could write as Eb/C) suddenly sounds like a Cm7.

Now, seventh chords (both minor and major) aren’t hard to play on guitar. But we can use the same principles to cheat our way into simulating extended chords.

Let’s look at our chart again:

If you play just the 5-b7-9 notes (G-Bb-D) you have a G minor chord. Very easy to play. Have your bassist play a C under that and you’ve just simulated a C9 chord. (Or, technically a Gm/C.)

Using the same principle, now play the b7-9-11 notes (Bb-D-F) and you are playing a Bb major chord. Now if your bassist plays a C you have a C11 chord, or Bb/C. (Just like that A/B chord in “California Girls.”)

All of these chords are just simple triads, but together with your bassist, you’re creating (or simulating) extended chords.

What about the other notes?

Now, of course, we’re missing a lot of notes, and in the case of that thirteenth chord, we’re missing the two most important notes — the 3 and the 7 — the notes that tell our listener whether our chord is major or minor or if it’s a dominant chord or not. But that’s often OK, and in some cases preferable. After all, assuming there are other instruments and/or vocals, we can let them play/sing the missing other notes. By limiting the guitar to just three notes, we’re also allowing the music to breathe a little.

But, assuming you can play major and minor seventh chords, you can easily work with your bassist to create more fully fleshed-out — but still easily played — extended chords.

Here are some more slash chords you and your bassist can try out:

Having said all of this, minor eleventh chords are very easy to play on the guitar. You simply barre an entire fret. Play all the open strings on your guitar and you have an Em11 chord. If you want to make it sound even better, simply place your pinky on the 2nd fret of your high E string. Take that shape and move it up your neck and you can play every minor eleventh chord in the world.