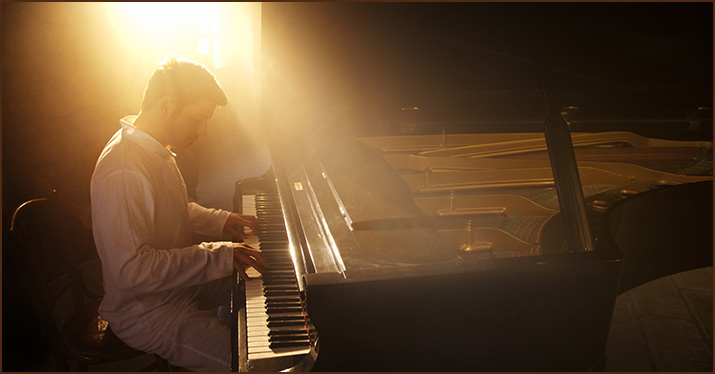 Augmented chords can add drama and tension, as shown in these examples from popular songs from the ’60s through the ’80s.

Looking to add a dramatic flourish to your music? Augmented chords have a yearning, almost anguished quality that can give your songs a melodramatic vibe — and they aren’t used in popular music very much these days. If nothing else, they’re fun to experiment with.

An augmented triad is essentially a major chord with a raised fifth. So, for example, an augmented C chord, or C+, is C-E-G#.

Perhaps the example that best shows off the dramatic possibilities of an augmented chord is the Beatles’ “Oh! Darling,” which features an E+ as its opening chord (and which we hear at the end of every bridge when Paul sings the word “died”). It’s amazing how a simple triad played on a piano sets the stage for one of the band’s most melodramatic songs.

In “Oh! Darling,” the augmented chord is used as a replacement for the dominant seventh. This is a very common use for augmented chords. The Beach Boys show how it can add more dissonance than a seventh chord in “The Warmth of the Sun.” The chord progression for the verses is C, Am, Eb, Cm7, Dm7, G7, G+. That move from G7 to G+ pulls the song back up to C in a more yearning fashion than a simple seventh chord could. It’s almost like a sigh.

(The Beatles did this effectively in “From Me to You.” Think of that dramatic moment at the end of the bridge—the “fied” part of “… and keep you satisfied—oooh!”)

Why do augmented chords work?

An augmented chord is dissonant; it feels unresolved. The raised fifth note (the G# in a C+ triad) sounds like it’s pulling up a semitone (toward A). This pull is especially pronounced if you go from a C major to a C+ because it provides us with chromatic movement from G to G# — our ear wants to hear an A. Combine that movement with the fact that the E in the C+ is pulling us up to F and we have a desire to resolve to F major.

Other uses for augmented chords

Augmented chords can do more than simply act as a dominant seventh substitute. Eddie Money’s “Baby Hold On” shows that the tension and release of simply vacillating between a D and a D+ can carry you through most of a tune.

Lesly Gore’s “It’s My Party” has a fun progression. It’s hard to hear on the recording, but the chords for the first half of the chorus are A, A+, D, Dm. This progression gives us a nice chromatic movement in the upper notes, which we can see here:

That Dm chord really wants to pull us back to A major, which is exactly what we get for the line “You would cry too if it happened to you.”

Augmented chords are all over Pink Floyd’s album The Final Cut, and they perfectly complement the anguished desperation of the lyrics. Take “The Gunner’s Dream,” for example, in which our opening chords are G, G+, Em, C.

You can add a seventh note to your augmented chord (e.g. a C+7, sometimes written as C7#5, is C-E-G#-Bb). The idea here is that this chord would want to resolve to the tonic even more desperately than a mere augmented chord, but I think it works better when it’s not being used as a dominant chord; like, as an altered III chord. Try G, B+7, C for example. Or use it as an altered vi chord that can lead nicely to a ii (e.g. I-VI+7-ii-V7).

Another variation is to add a major seventh. (A Cmaj7#5, is C-E-G#-B). This chord lacks the functional dissonance of a simple augmented chord, but it has a certain splashy pizzazz. (If you were to add an A below that C it would give you the “James Bond chord”: A-C-E-G#-B, which is an Am/maj9. And yes, I know the actual James Bond chord is in E minor — 0-10-9-8-7-x on your guitar.)

Simply adding a ninth note can add a beautiful sadness to your augmented chord. C+(add9) would be spelled C-E-G#-D. You may have realized that this chord is really just an inversion of a +7 chord. (e.g. if you rearrange the notes of C+(add 9), you get E-G#-C-D, which is an E+7.) But by spreading out that major second interval found in the +7 chord (the C-D in this instance) you create some much-needed space.

One of the interesting things about + chords is that they are symmetrical, or perhaps a better word is recursive. For example, C+, E+, and G#+ all use the same notes: C-E-G#, E-G#-C, G#-C-E (although technically that G#+ chord would be written as G#-B##-D##, but they are enharmonically the same). This can lead to some lovely runs on the guitar. If you play x-3-2-1-1-x and then slide that same shape up four frets, and then again another four frets, you are still playing the same chord, but you can give your song and added dramatic flourish, especially if you resolve that to a barred F chord on the 8th fret.

I’m gonna sign off with one of my favorite songs, and one that features several augmented chords as well as an exotic F#7+5b9 (at the end of the first verse). Enjoy! And have fun experimenting.

6 thoughts on “Using augmented chords in your songs”