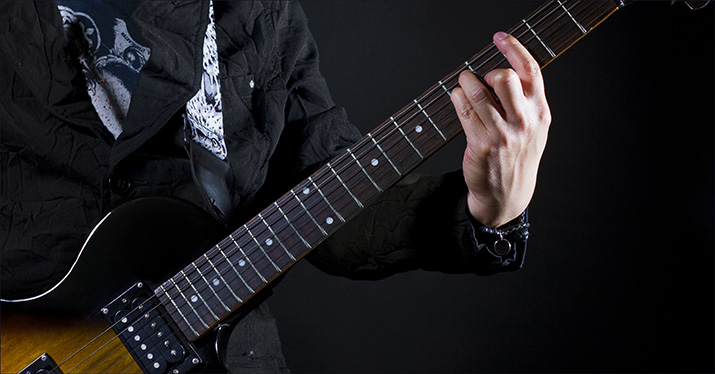 Power chords might not be chords, but they’re powerful intervals — especially when mixed with distortion.

If there’s a sound that most immediately screams “Rock!” it’s power chords. They’re muscular and sound great with overdrive or distortion. Some of the most famous riffs in rock — “You Really Got Me,” “Smoke on the Water,” “Owner of a Lonely Heart,” “Hit me with Your Best Shot” — are built on power chords.

Not only do power chords sound great, they’re easy to play. You can teach a newbie how to play a power chord in ten seconds and unlock practically everything they need to know to bash out a punk anthem. But as simple as they are, power chords are surprisingly versatile and can allow you to do some rather interesting and complex things with your songwriting. In fact, you might be surprised at how powerful power chords can be.

What is a power chord?

Technically, a power chord isn’t a chord at all. Chords have at least three notes. A power chord is really just an interval. Two notes. A one and a five. But while they may not technically be chords, when amplified and distorted, they sound huge — bigger than “regular” chords.

Power chords are usually notated by the number five. A C5, for example, is just the notes C and G; an E5 is an E and a B. Many guitarists include an extra root note, an octave higher (so they’re playing C-G-C). Power chords can also be inverted, with the 5 on the bottom. “Smoke on the Water” is a good example of this, whose first chord is a G5, but it’s voiced D-G.

Power chords weren’t used before the electric guitar era. In fact, in classical music it was considered bad form to have “parallel fifths,” or to play two five-chords back-to-back. One can understand where they were coming from: as they only consist of two notes, power chords sound hollow and wimpy on acoustic instruments.

But play a power chord on an overdriven electric guitar and the sound is massive. Though they were made popular by ‘60s bands like The Who and the Kinks, power chords first appeared on blues records, like 1951’s “How Many More Years,” by Howlin’ Wolf, featuring guitarist Willie Johnson.

It’s the lack of notes that gives power chords their power. Playing a major chord on a guitar with distortion will often sound cluttered. There are simply too many notes too close together, generating too many frequencies forming complex ratios to each other. Distortion, thanks to an effect called intermodulation, adds partials to the existing notes, further heightening the tension between those ratios to an unpleasant degree. But remove the third from that chord and you reduce the competing frequencies, allowing the distortion to fill out the sound without sounding cluttered.

(Actually, if we used Just Intonation for our tuning, major chords would sound fine with distortion. See my article, “Why you can’t tune a guitar – and how to fix it,” on guitar tuning. Skip down to the bottom to the Jon Catler video and you can hear the difference between a distorted guitar playing equal temperament and Just Intonation.)

The Power of ambiguity

Omitting the third in chords does more than give you a big guitar sound, it gives you freedom for your songwriting.

In chords, it’s the third that tells you whether a chord is major or minor. Major and minor chords are great for enhancing the emotions of your songs, but they can also be confining. Once you play a C minor chord, for example, you’re setting up parameters that limit which notes and chords you can (easily) use. But play a C5 and you’re not committing to a major or minor key, which not only adds the number of chords you can play, you’re freer to sing notes that would have fallen outside your major or minor key.

Great example: Nirvana’s “In Bloom.” Kurt Cobain wrote almost exclusively with power chords and, as a result, his songs use some very unusual chord progressions, often changing modes at the drop of a proverbial hat.

That progression would sound awkward had he played B, A and Bb as either major or minor chords. But by using power chords, that progression sounds dark and moody.

Alice in Chains offers up a fascinating example of how simple power chords can create complex harmonies while still delivering raw power. “Them Bones” uses a chromatic chord progression: Db5-D5-Eb5-E5, which could only work as power chords. But to make things even more interesting, singers Layne Staley and Jerry Cantrell sing — and hold — perfect fourth harmonies (Ab and Db) over all the chords (on the opening words “I believe…” and throughout).

Thanks to those constantly moving power chords, the band is effectively creating the following chords: Db5, Dmaj7#4, Eb7sus4, E6. If you were to play those as actual chords (including the third) they would sound jazzy at best and muddy at worst. But by leaving out the third (and thanks to those patented, amazing Alice in Chains harmonies), you’re creating a huge, crushing sound.

Even if you’ve never played a guitar in your life, start experimenting with power chords. They’re obviously a staple in metal and punk, but there’s no reason they couldn’t be used in other genres. They could provide just the right ingredient to make your hip hop hook more powerful or add some complex harmonies and dark moods to your next country hit.

3 thoughts on “What makes power chords so powerful?”