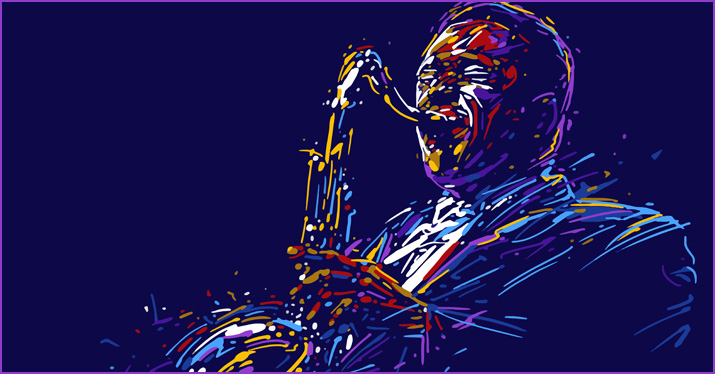 Becoming fluent with musical improvisation is an attainable goal. Here are some tips to help you grow in that direction and to make your own music improv shine.

Whether you’re turned on by Phish jamming through the night, Miles Davis conjuring wistful melodies in space, or Stevie Ray Vaughn wailing something nasty, you just can’t argue with the fact that skillful musical improvisation is a powerful thing.

Learning to create music spontaneously in the moment is not a simple task, and any experienced improviser will tell you that it’s not nearly as straightforward as “just making it up.” In fact, the musicians who make improvisation look the most effortless are the ones who have put the most time into practice and study.

That said, even if you’ve never improvised a lick in your life, becoming fluent at musical improvisation is an attainable goal. Here are some tips to help you grow in that direction, and to make your own impromptu musical stories shine.

Musical improvisation is akin to composing

The ability to improvise on stage or in the studio isn’t some magical facility only bestowed upon the lucky. Rather, like nearly everything in music, it’s a skill that can be learned.

Years ago, I had the privilege of interviewing legendary jazz pianist McCoy Tyner for Keyboard magazine. When I asked him how he practices improvising, he said, “I don’t actually practice that much. I compose.” He went on to say that, in many ways, improvising and writing music are two sides of the same coin — only one happens more slowly while the other happens very quickly, in the moment.

In other words, if you can craft a melody, hammer out a bass line, or write a cool set of chord changes, you have what it takes to improvise — even if the idea of creating music instantaneously, in front of a crowd, seems terrifying.

“Improvising is just a more spontaneous, sped-up, real-time version of the same process,” agrees Jordan Scannella, a bass player based in New York City. “When you’re trying to write a song, you want to create something that’s memorable, that people can take home with them. Why should your musical improvisation be any different?”

Play along with your favorites

A great way to get your toes wet, build confidence, and gain experience as an improviser is to jam along with your favorite recorded music. Regardless of whether you’re a metal guitarist or a blues harmonica player, finding how your sound and style fits in with the albums you love can take you far.

Just find a space and time when you’ll be alone, put on some of your favorite music, and make noise that you feel dances nicely with what you’re hearing. Try different approaches — perhaps play through the same song repeatedly, adding only a few notes here or there at first, and then playing much more densely and aggressively. Similarly, you can try playing parts that blend nicely into the background and enrich the overall texture of the recording, and then play something that’s loud and cutting, placing your musical improvisation in front of your favorite band. Most importantly, experiment far and wide and go by what you think sounds good.

“I used to play along with hip-hop records when I was coming up,” says Scannella. “Hip-hop grooves can often be static and repetitive, so playing along with albums of that genre can give beginning improvisers a great opportunity to work within a basic set of parameters.”

Remember — the more hours you log playing along with your favorite records, the easier it will be to come up with something cool and compelling when there’s a live band and audience involved.

Start with the melody

When you’re learning to improvise, you don’t need to stray far from the melody to say something profound. “I encourage bass students I work with, no matter whether they’re doing jazz, rock, funk, or anything else, to learn the melody and learn the guitar part and other aspects of what’s going on in every tune they play,” says Scannella. “When it comes time to do your improvisation, you can use all those elements to inform what you’re playing.”

When launching off a melody, try changing a note here or there, omitting a note or two, or adding your own ornamentation to a certain lick or phrase. You’ll likely be surprised by how much personality even a simple variation can create.

Move to the rhythm

“When it comes to musical improvisation and making a melody your own, rhythm is king,” says Scannella. “There are only so many different notes you can play, but there’s endless variation available when it comes to rhythm. Blues players, for example, don’t generally play a whole lot of different notes from song to song and solo to solo. There’s so much they can do with rhythm and feel to make one tune vary from another.”

Again, start by making minor shifts in the rhythm of a melody you’re already playing. Even hitting a single note earlier or later than expected can create a significant impact on your listeners.

While studying music theory is not essential when it comes to learning to improvise, it can sure help. “Learning jazz theory was a great asset for me when it came to understanding harmony and how all of the elements of a piece of music work together,” says Scannella. “It expanded the range of tools I could use when it came time for me to improvise.”

Regardless of how much or little theory you decide to study, don’t fall into the trap of fearing that learning more will make your playing less raw or real. “You never want to limit yourself,” Scannella continues. “Just because you know theory doesn’t mean you always have to use it.”

React to your surroundings

In 2006, I caught one of Phish’s explosive shows at Coney Island. It rained during the outdoor concert and, at one point, the highly-improvisational band seemed to channel the flow of the weather through their playing. As the rain drenched us all the harder, the jam intensified, becoming denser and more aggressive; as the rain lightened up, the groove became more airy and peaceful.

Regardless of whether you have a rainstorm to inspire you, there’s always something you can use as creative fodder for your musical improvisation. Is someone talking loudly at the table next to the stage? Try imitating the rhythm or phrasing of their speaking in your playing. Is there a friend hanging at the bar that you’d like to catch up with? Begin the conversation with your instrument.

Sometimes, the coolest moments in a performance can come from something you had absolutely no intention of playing. When I was recording the song “Autumn Leaves” for my first album with Aurical, I slipped in the middle of the piano solo and accidentally hit two notes, a half-step apart, instead of one. I cringed in the moment, but kept playing, and when I listened back, the dissonance worked quite well in the context of the song — who would have guessed? Since then, I’ve remembered that unexpected minor-second chord and intentionally put similar dissonance into my solos when I perform that song live.

In short, don’t be afraid to try something different and risky when you improvise. Only by pushing your comfort boundaries in the moment can you really discover just how far you can go creatively.

Don’t judge yourself in the moment

“There’s an old adage that says if you’re thinking you’re stinking,” says Scannella. “For any aspect of your playing — groove, intonation, note choice, whatever — too much analysis in the moment can be detrimental. Especially if you’re improvising and feeling like you’re sucking, putting that feeling into your consciousness isn’t going to have a good effect. You practice to be prepared for those moments, but when you play, just play.”

Learning to ignore the self-critical voice when you’re improvising can be tough. During a 2011 interview with Chick Corea for Keyboard, the iconic musician told me that, as he approached his seventh decade, he had finally “cut that terrible habit out. It’s a very non-productive way of doing anything. It just slows you down to a snail’s pace.”

[Playing without judging yourself] is nothing that can be achieved mechanically by practicing. It’s in the realm of the spirit, in the realm of an ability to be comfortable with your band mates, with an audience, and with yourself, really. Some of it is a matter of confidence, being secure in your abilities, being able to have the courage to realize your own thoughts. Every musician has his or her own taste and goals, and the challenge in life is to bring that forth when you’re on stage and actually performing, to follow that through to its final conclusion without any barriers or considerations except for achieving that. That doesn’t tell you how to do it, but that’s what I think is the ideal.

Review after the fact

“It’s always enlightening to hear what you played after the gig, whether it be encouraging or humbling,” says Scannella. “Often, what we hear on the bandstand in real time is not the same as what the audience hears, so listening to yourself recorded can be a big help.”

Record your improvs on an iPhone or other handy digital device, note what works and what doesn’t, forgive yourself for any mistakes made, and bring that newfound knowledge to your next musical improvisation — you’ll be that much more skillful and assured in your playing the next time around.

“As a listener, I want to hear people tell stories through their improvisations,” says Scannella. “Blowing tons of notes up and down is impressive, but over a whole set of music, it gets boring. I’d much rather hear someone explore ideas, develop melodies, and work with musical motifs to really take the listener on a journey.”

The stories you tell through your improvs don’t have to be Shakespearean epics. Rather, you can “talk” about what you had for breakfast, a news story you saw on TV that made you happy or angry, something your dog did this morning, or even the experience of improvising music in the very moment you happen to be occupying. Just make sure that whatever story you’re trying to tell through your playing is something that brings out your own emotions: if you’re feeling something, chances are the audience will feel something, too.

One thought on “Musical improvisation: how to make music in the moment”