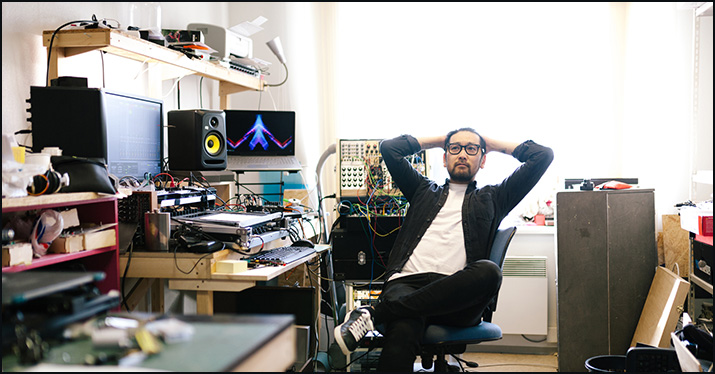 Pre-made loops are great tools for creative inspiration while you’re recording. A few simple techniques can help make them sound less like stock sounds and more like you.

In 2017, I wrote Producing music with loops? Find a way to make them your own.” for this blog. In that post, I talked about how making pitch and tempo adjustment, adding distortion and modulation effects, and cutting and pasting can help you personalize any loops you work with.

Recently, I’ve been playing with some new approaches to customizing loops that have helped me reinvent standard material in ways that sound and feel organic and fresh. Here are some of the strategies I’ve been using — I hope they’re helpful in your own music-making as well.

Compression may seem like one of the more subtle effects you can apply to a loop, but it can transform standard, stock-library material into something vivid and fresh.

Recently, I’ve had a great time experimenting with Universal Audio’s digital emulation of the classic Fairchild 660 compressor, which was notably used on Beatles and Pink Floyd recordings. In particular, by taking various parameters of the compressor to their extremes, I’ve been able to come up with some really unexpected textures that have pushed my music in new directions.

You can try this yourself. Just dial up any virtual or physical compressor that interests you and play back your chosen loop on… well, a loop. Then tab through presets, slowly turn knobs, or flip switches until you settle on a sound that piques your interest and sparks your creativity. Different compressors can have very different tones and characters, so if you’re not getting results that inspire you from one, pull up another and keep experimenting.

In one song I’m producing right now, I tried using Apple Logic’s built-in tape delay emulator to make a standard snare drum loop sound more organic and interesting. By dialing up the feedback and tweaking a few other parameters, I was able to come up with a sound that felt propulsive and original.

I then tried using the same effect with similar parameters on bass and synth loops elsewhere in the project. I was pleasantly surprised to find that doing so created an unexpected sonic “glue” that made the overall track feel more cohesive and gave it a character that I loved.

As you experiment, try using similar effects on multiple drum parts, bass or synth textures, and more — but remember to not overdo things. In the above situation, I tried to be careful to add enough of the effect to provide continuity throughout my production, but not so much that the effect overwhelmed the song itself.

Many loops you’ll find out there are meant to be used in standard 4/4 time. They start nicely on beat one and go on for one or more full measures, making them easy to drag and drop into your production.

There’s nothing wrong with using standard loops this way — but there’s a lot of fun to be had if you try something different.

I’ve come up with some very interesting effects by starting drum loops on the “and” of beat one, for example, or a sixteenth note earlier or later than one might normally expect. I’ve also come up with cool results by sliding a noisy reverse cymbal loop back and forth until the swells and peaks best accent other parts of my production — regardless of where the loop was intended to start to lock into standard 4/4 time.

Again, experimentation is key here. Drag and realign your loops in unexpected places and trust your ears.

One of my current productions features a break where drums and bass drop out, a contemplative electric piano part fills the space, and then everything crescendos with the full rhythm section back in.

Just for kicks, I found a phased-out, aggressive, buzzing, rhythmic synth loop and tried placing it underneath my mellow keyboard part. The loop wasn’t even in the same key as what I had tracked, so it seemed unlikely to work. But, as with the examples mentioned already, I was pleasantly surprised. When I panned the loop partially to the side and adjusted the volume so it supported but didn’t overwhelm, it created a great undercurrent of dissonance and movement that led perfectly into the swell of drums and bass returning.

In your own productions, try throwing loops in places common sense may tell you not to put them and see what happens. You never know when adding loops in unexpected contexts can inspire you in equally unexpected ways.

Do you have any strategies to customize and personalize standard library loops? Tell us in the comments below.

Related Posts
Producing music with loops? Find a way to make them your own.
Dave Smith: The Godfather of MIDI
The beginner music producer’s checklist
Thinking about building a home recording studio? Answer these questions first.
Home studio recording: How to record and mix