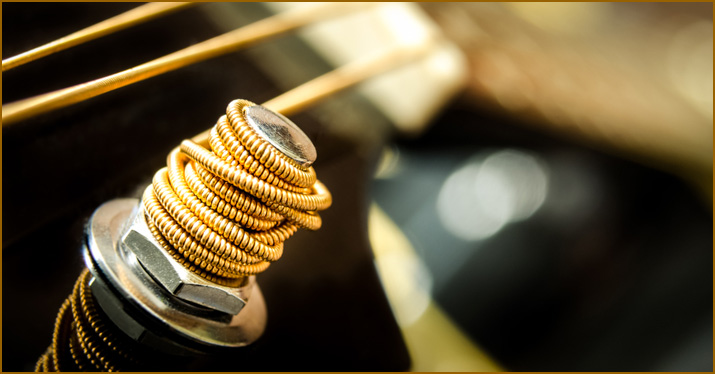 Tuning a guitar should be easy, but it’s not. In fact, the more you explore guitar tuning, the more you realize there is no one way to tune a guitar.

When it comes to tuning, ignorance is bliss.

If you’re a beginning player and you tune your guitar using an electronic or digital tuner until you get it “close enough” and then go on about your day, bashing out chords and having fun, you’re lucky. Relish those moments, because the minute you actually have to pay attention to tuning, like when you are about to record or you’re playing with others who care about intonation, you can easily fall down a rabbit hole that can be impossible to emerge from.

Tuning a guitar should be easy – after all, we have digital tuners! – but it’s not. Every guitar is different. Every player is different. What style of music you’re playing matters. Where you play on the neck matters. How hard you strum matters. What key you’re playing in matters. It also matters if you’re using a capo. It’s no wonder that professional bands have guitar techs working offstage.

There is no one way to tune a guitar.

OK, so why is this true?

One reason relates to the physical layout of a guitar compared to a piano or even a violin. Each note on a piano has its own string (or strings). You tune that note to where you want it, and you’re good to go. Every time you hit that key you get the note you want.

On a guitar, however, you’re asking six strings to produce dozens of notes each. And the way you produce those notes is by pressing down on the string. So let’s say you get your low E string in perfect tune: the minute you push down on the string on a fret, you are bending the string a tiny bit, which makes the tuning a tiny bit sharp, especially if your strings are high off the fret board.

Also, the lower strings on a guitar tend to ring sharp the harder you play them. So if you’re playing a style of music where you tend to hit your low strings particularly hard, you will sound more out of tune.

We’re not done with our reasons why you can’t tune a guitar, but let’s pause here, because these are very common problems, especially amongst acoustic guitar players, and James Taylor has a rather nice method of tuning that can help solve these problems.

James Taylor to the rescue!

To do this, you’ll need a tuner that can measure cents. A cent is 1/100 of a semitone. (C to C# is a semitone, or half-step.) These tuners can be easily downloaded to your phone or computer.

This tuning method is also great for using a capo.

Now, your mileage may vary. Your guitar is different than Taylor’s guitar. Your action may be higher. Maybe you play harder. Maybe you don’t use capos. Try it out and adjust your tuning as need be.

How NOT to tune a guitar

1. Do not use the fifth fret and seventh fret harmonics. Many guitarists learn this method. You play a harmonic on the fifth fret of your low E string, then play a harmonic on the seventh fret of your A string, and then tune your string until they match. You can listen for the vibrations. When the vibrations are gone, the strings are, apparently, in tune. You repeat this all down the guitar (expect for the B string) and hope that this will tune your guitar. But it won’t.

2. Do not tune to a chord. You’ve probably tried this at home. You’re tuning your guitar and you play the open D, G, and B strings. And you tweak the B string until it sounds perfectly in tune with your D and G strings. Glorious, right? But then you play a D chord… and your D note on your B string is way flat. You check your B again and it sounds great. But now: check that B with a tuner, and you’ll see it’s about 14 cents flat of what a “standard” B should be.

What gives? Why don’t these two tuning methods work?

Well, this is going to take us further down the rabbit hole, but hang in there because it will lead us to a very interesting place.

When you pluck a string on a guitar, you’re actually hearing more than one tone. If you listen closely you can hear other notes, harmonics, ringing higher in the register. To hear these harmonics better, pluck that same string and then lightly hold your finger in the middle of the string (at the twelfth fret). Doing this produces a tone that is one octave higher than the original note. Pluck the string again, this time without touching it, and you’ll be able to hear that octave harmonic in the unaccompanied note.

Pluck the string again, holding your finger over the seventh fret, and you’ll hear a “perfect” fifth. Hold your finger between the third and fourth fret (about 90% of the way towards the fourth fret) and you’ll hear a “just” third (more on that later). As you move your finger up towards the head, you can produce all the tones that were originally used to create the notes of Western music. These notes are all present in one note.

Notice that in order to produce that “just” third note, we couldn’t hold our finger exactly over the fourth fret. We had to fudge it a bit.

Try this out. On your low E string, produce that third harmonic again by holding your finger near the fourth fret. Hear that note? That is a “just” third, or how we hear what a G# should sound like. OK, now while that harmonic is ringing out, play a G# note on your high E string. They aren’t the same. They should be, but your G# played on your high E string is sharper than the just third.

This is because our guitar – in fact all of Western music – is tuned to what we call equal temperament (ET).

If you could move the frets of your guitar, and you moved your fourth fret back towards the head to the spot where your finger was producing that “just” third harmonic, and then you played the G# note on your high E string, you would have a “just” third.

That is what we call just intonation (JI). That G# is the same as the G# harmonic that is playing when you pluck your low E string. If you play a “just” G# on the G string of your guitar, your sustain will go through the roof because that note will resonate with both E strings.

The reason JI sounds right to us is because all the notes in our scale are ringing true to the harmonics in our root note.

So someone very clever came along and realized that if we made the distance between all of the semitones exactly the same, then we would be able to switch keys (and/or modulate between any key) very easily. Hence, equal temperament.

Of course, using ET meant sacrificing the pure harmonies we get from JI. In equal temperament, every single interval (other than an octave) is off. The major third is, as we mentioned above 14 cents sharp, which is why tuning to a chord doesn’t work. And an ET fifth is two cents flatter than a JI (or “perfect”) fifth, which is why tuning your guitar with fifth harmonics results in an out of tune guitar. Two cents may not seem like much, especially since, in the James Taylor tuning method, we suggested you detune all of your strings by as much as 12 cents. But when you are using harmonics to tune, you’re going flatter the higher you go, as opposed to the Taylor method, in which the lower strings are flatter.

Also, the minute you hit the distortion pedal, you’ll notice the problems with ET even more.

Watch this video to hear (and see) the difference between JI and ET. (Ignore their use of some of the terms, like “false tuning.” There’s nothing “false” about ET, it’s just a compromise.)

Guitar frets to the rescue!

OK, so maybe this intonation “problem” doesn’t bother you. After all, guitar music has been successfully recorded with regular guitars, tuned the normal way for decades, and for the most part the listener doesn’t complain.

But if it does bother you – and once you notice it, the more it will bother you – there are actually some interesting solutions.

First off, if you are recording and you are predominantly playing one chord or can use single chord shapes – e.g. using barre chords based on E – no problem: tune your guitar so that that E sounds great.

Another solution is to add extra frets to your guitar. Turkish guitarist Tolgahan Çoğulu offers easy solutions to add frets where you need them.

True Temperament offers totally different frets to use on your guitar. “True temperament” is not JI, but it’s much closer. Check out this video, featuring guitar wizard Mattias Eklundh.

Finally, if you’re willing to invest in a new guitar, check out FreeNote’s 12-tone Ultra Plus guitar, which features 36 different pitches per octave. This guitar has all the standard frets, plus a bunch of others that allow for rather interesting sounds (your 11th chords, for example, will sounds gloriously consonant). This video, featuring microtonal musician Jon Catler, offers some highlights.

This guitar and video brings us to another rabbit hole: microtonal music.

For more tips and tricks check out our helpful guides.

Related Posts
Guitar care: humidity extremes can damage your instrument
Guitar intonation: how to keep your guitar in tune
So this guitarist walks into a recording studio…
Home Recording Tips – 10 Mic Placements For Acoustic Guitar
How Taylor guitars are made