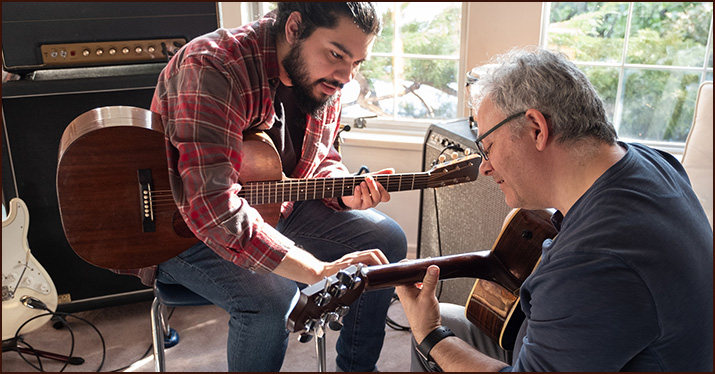 Looking to spice up your chord progressions? Why not borrow a chord or two from a different mode or scale? Borrowed chords are a tried-and-true way to add an unexpected touch to songs.

Borrowed chords, sometimes referred to as modal interchange or modal mixture, are fairly common in music of all genres. You have probably already used them in your own songs, perhaps without even realizing that’s what you were doing. Typically, though, people limit themselves to only using the chords from parallel major and minor keys.

Table of Contents:
• What is a borrowed chord?
• Using multiple borrowed chords
• Working in a minor key
• The major I chord
• Borrowing from other modes
• Some modal examples
• How to build your own progression
• Soloing or writing a melody over borrowed chords

But you can borrow chords from any of the seven modes, and even from other scales as well, giving you access to dozens of chords, which allows you to add even more drama, excitement, and emotional depth to your music.

What is a borrowed chord?

A borrowed chord is simply using a chord that is found in a parallel mode of your song’s key. For example, if you were writing a song in the key of C major, you would have seven diatonic triads at your disposal: C, Dm, Em, F, G, Am, Bº. But songwriters rarely limit themselves to just those seven chords.

The minor-four chord (Fm in the key of C) is a good example of a commonly used borrowed chord. This chord, which is not one of the diatonic chords found in C major, is borrowed from the parallel key of C minor and is easily substituted for a IV chord (F major, in the key of C). One famous example of this use of the minor-four chord is “Sleepwalk” by Santo and Johnny, in which an Fm is used instead of an F in a haunting variation of the classic “doo-wop” progression: C — Am — Fm — G.

The minor-four chord is also a great substitute for a V chord. Try using an Fm6 instead of a G7 in your next C major song.

(Another commonly used chord that is borrowed from the parallel minor is the flat-VI chord, which would be Ab major in the key of C. This is such a great chord, I did a whole article on it.)

“Lovely Day” by Bill Withers is set in E major but borrows four chords from E minor. In the verse and chorus, he uses a Cmaj7 (the flat-VI chord) and Bm7 (a minor v). Although going from bVI-V7-I (C-B7-E) is a very common use of the flat-six chord, Withers also swaps out the B7 for a Bm7, which gives the song a relaxed feel, perfect for the lyrics.

Interestingly, in the pre-chorus, he also uses two more borrowed chords: An Am7/D, which functions as a D11 (essentially a bVII chord), as well as a straight-up Am7 chord, which is the minor-four.

Working in a minor key

If you’re writing a song in a minor key, you can borrow chords from the parallel major, though this is pretty rare, and in fact, what you’re really doing is writing a song in either the Dorian mode or the harmonic minor.

Similarly, there are plenty of songs that seem like they’re set in minor keys (aka the Aeolian mode) that use a major-IV chord instead of the diatonic iv (In C, using an F instead of Fm). But really, these songs are just written in Dorian, which features a major-IV. (There’s more info about modes below.)

The major I chord

Far and away, the most common chord borrowed from a major key is the major I chord, which is known as Picardy third. This is usually used at the end of a song, giving the tune a bright ending.

“Happy Together” by the Turtles offers up a good example of a Picardy third, but it also features a nice use of the flat-III chord and shows how nicely borrowed chords can allow you to switch between keys.

The song is in two different keys, F#m (in the verses) and F# major (choruses), and the transition to each is made smooth by borrowed chords.

The chord progression for the verse is F#m — E — D — C#7, with C#7 being a major V chord. As I mentioned earlier, this chord is found in F# harmonic minor. But as this chord is also found in F# major, this makes the transition from minor to major very smooth indeed. (This is known as a common chord modulation.)

The progression in the chorus is F#-E-F#-A, with A major being the flat-III chord borrowed from F#m. A flat-III is a very commonly borrowed chord, but because of its unsettled nature, it’s usually it’s followed by a IV or bVI chord.

Here though, each phrase of the chorus pauses on that A major chord, making the listener feel like they’re hanging on for dear life. (Again, this feeling perfectly matches the dark undertone of the lyrics.) Because A major is in the key of F# minor, the transition back to the minor for the verse is a smooth one.

Finally, the song ends with the minor-key verse chords repeating until finally ending on an F# major, our Picardy third.

Borrowing from other modes

As I mentioned earlier, you don’t have to limit yourself to just borrowing chords from minor or major. You can borrow chords from any mode.

I’ve written out all of the chords for the seven modes in C below, highlighting the more iconic chords of each mode. (I’ve included the sevenths, as opposed to just the triads, because there are more options this way. For example, both the Ionian mode (major scale) and Dorian mode include an F major, but the Ionian has an Fmaj7, whereas the Dorian has an F7.) 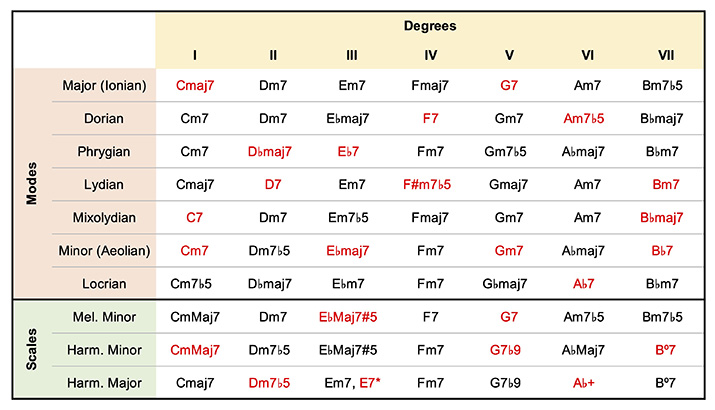 (*Note, in the C Harmonic Major scale, you have these notes: E, G, Ab, and B, thus allowing you to create two triads, an E minor and a chord that sounds exactly like E major, though it technically wouldn’t be called that due to harmonic semantics.)

You can even use chords from such scales as the Double Harmonic Major (giving you such chords as Dbm7, Em6, G6b5, and others) and its various modes, though things can get a bit wonky chord-wise.

If you count just the triads and sevenths, this means you now have dozens of different chords to work with, as opposed to the original seven diatonic chords.

So how do we use these chords? There are far too many chords for me to go into detail on each one (although we did a whole article on the Neapolitan chord, which is a bII chord borrowed from the Phrygian mode). Instead, let’s look at some examples. I’ll leave it to you to experiment with them.

Bonnie Tyler’s “Total Eclipse of the Heart” is a fascinating song for several reasons (most of which, like the tonally ambiguous intro section, fall outside the scope of this article), but we’re including it here for its bold use of the major II chord, which is borrowed from the Lydian mode.

This chord arrives in the chorus, which is firmly in G major. The songwriter, Jim Steinman, cycles through a couple rounds of the standard “doo-wop” chord progression: G — Em — C — D, before taking us to an Em — A major. As I mentioned earlier, this major II chord is borrowed from the Lydian mode. Usually, a II chord is used as a secondary dominant, in other words, as a V-of-V chord. (In the key of G, we would normally see this progression: A-D7-G.)

But Steinman treats that Em chord as a minor five chord, pulling us towards A major (v-of-II). The song briefly feels like we’ve modulated up to the key of A major before immediately falling back down to G. Then he pulls off the same trick again.

Musically, this makes you feel trapped in an endless cycle, with escape just around the corner—a feeling that perfectly matches the lyrics.

You can hear this starting at 1:51 in the video.

“Us and Them” by Pink Floyd features an unusual minor/major7 chord, which is borrowed from the harmonic minor scale. This is heard in the intro/verse chord progression: Dsus2, D6add9, DmM7, G/D. (In case you’re wondering, a DmM7 uses these notes: D, F, A, C#.)

How to build your own progression

The long and short of it is to just grab a chord and use it and see what happens. For the most part, these chords should easily slot into your progressions with no problems.

Even some of the stranger-seeming chords can be incorporated into your songs quite easily—especially if you use common tones.

Let’s say you want to try to use that sharp-four-half diminished chord from Lydian (F#m7b5 in C). At first, this chord might seem hard to work in; after all, that F# note looks quite out of place. But let’s just dive right in and go right from our tonic chord of C major to F#7b5. It’s a startling progression, but you can resolve it quite nicely. Here’s how.

First, let’s take a look at the notes in that F#7b5 chord: F#, A, C, E. If we keep the A-C-E the same and simply drop the bass down to an F-natural, we have our standard IV chord. By keeping three of the notes the same, the transition is smooth.

Here’s a progression I made up using that chord:

Easy peasy. Not only did I use a Lydian chord but I also borrowed an Fm6 from minor.

Soloing or writing a melody over borrowed chords

If you are having to solo over a song that features borrowed chords, when that chord comes, you can simply switch to playing notes from the mode that chord was borrowed from. The same is true if you are composing a melody. Be sure to emphasize the notes that make that mode special (for example, the sharp-4th note in Lydian, the flat-second in Phrygian, the flat-seven in Mixolydian, or the natural 6 in Dorian).

So go ahead. Throw caution to the wind and try out some of these borrowed chords. Your songs will thank you for it.