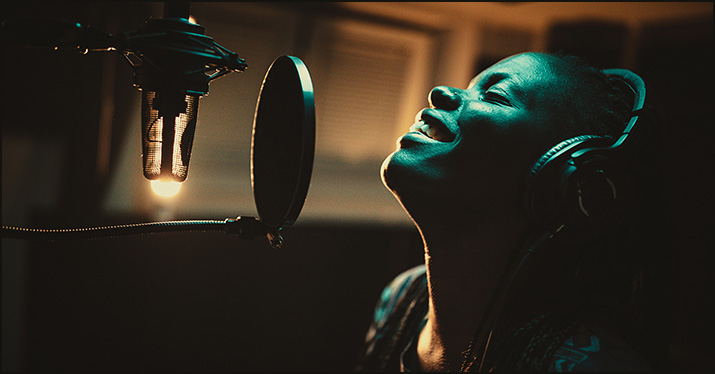 Mic selection can help shape the color, mood, and impact of your next song. Here’s advice on how to choose microphones that best fit your music.

Years ago, when I was recording an album with The Simple Things, there was one day when all we did for an hour was test vocal microphones in the studio. Our vocalist, Kaitlin McGaw (who currently leads the four-time Grammy-nominated Alphabet Rockers), sang into a variety of mics and preamps, the engineer recorded each take, and we all listened back.

Every take and mic/preamp combination sounded clean, clear, and vibrant, but there was only one that sounded like magic. We all agreed that that particular combination of voice and equipment was right for the album — and I still love the vocal tone on that project today.

Table of Contents:
• Do what works for you
• Test, compare, and keep notes
• Seek resources and reviews
• You don’t need an expensive mic to make great music

The more projects I’ve produced, the more I’ve paid attention to the nuances of choosing the right microphones and how they can affect the character of a recorded sound and play a key role in building a production that I’m proud of. Here are some strategies that have helped me make microphone choices that strengthen my music; I hope they help in your own music-making, too.

Do what works for you

I recently had the privilege of testing out a Warm Audio WA-8000 condenser mic, which is a close reproduction of the classic (and much more expensive) Sony C-800G. The Sony was made famous by hip hop and R&B artists like Dr. Dre, Mariah Carey, Eminem, and Rihanna, and is known for its crispness and clarity. And while I was excited to try the mic out, I was unsure of how my own vocals — which usually go more in the straight-up rock direction — would translate.

As it turns out, I loved every second of vocals I recorded with the WA-8000. I had previously recorded on the quintessential Neumann U67 and U87 microphones, which are widely used for rock (and many other genres), and been very happy with the results. But I liked this even more.

Should you avoid certain mics just because your music style is different from the genres or uses that made those mics famous? Absolutely not. Try every mic that piques your interest, even if you’re afraid of using it for the “wrong” genre or purpose, and see if the colors it gives your voice, instruments, and overall production resonate with you.

While most of us aren’t in a position to purchase twenty high-quality microphones, test them all out at home, and choose the single best one for our music, there are ways to grow your knowledge when it comes to how different mics sound — for your projects in particular — and which mics will best serve you in a variety of contexts.

Whenever you’re in a studio recording setting, pay attention to what mics are being used for what purposes and how they sound to your ears. If you’re in a situation like I was with The Simple Things, make sure to ask your engineer to try different mics and note how each one sounds on your voice and/or instruments. See if you can borrow or rent a variety of mics from friends or colleagues, try them out one after another, and keep a record of which ones turn you on the most. Then, as you’re able to afford it, grow your own collection of mics that intrigue you and keep track of which ones inspire you the most in different contexts.

It’s also worth checking out online resources like Audio Test Kitchen, which compares the sounds of different microphones in controlled studio settings. While these examples will of course feature someone else’s music, they can still give you a sense of the colors and tones different microphones could bring to the table in your own productions.

In another recent example of how testing microphones can illuminate things: In addition to the WA-8000, I tried out Warm Audio’s WA-47Jr, which the company describes as an “FET, transformerless take on the classic Neumann U47 tube microphone.”

The WA-47Jr and WA-8000 are very different mics at very different price points (the WA-8000 costs four times as much as the WA-47jr), so I certainly didn’t expect them to sound the same. But even with that in mind, I was surprised by just how different and interesting my recordings with the two mics turned out to be.

On straightforward rock-style vocals, the WA-8000 gave my singing a tone that was simultaneously sharp, crisp, warm, and nuanced — ballsy without being brittle. By contrast, the WA-47Jr gave my vocals a sound that felt detailed and alive, but slightly rounder and more buttery in character. For my current production-in-progress, or anything with a similar vibe, I could easily see applying the WA-8000 for aggressive lead vocals and the WA-47Jr for background singing and ambient vocal textures.

As I work on future productions, I’ll keep in mind how these microphones interact with my voice and the feelings each mic inspires in me.

You don’t need an expensive mic to make great music

It can be easy to feel like you’ll never produce great music unless you have the sexiest, most expensive equipment. But that isn’t true.

Years ago, I interviewed U2 producer Steve Lillywhite, who told me that Bono often recorded vocals in the control room, singing into a Shure SM58 microphone — which you can buy for around $100.

In a 2019 Sound on Sound article, Finneas describes how Billie Eilish recorded the song “Ocean Eyes” on an Audio-Technica AT2020, which you can also find in the $100 range.

In my own experience, I’ve found that even built-in laptop microphones can deliver, in the right context. On my current production-in-progress, I recorded extremely rough guide vocals using my MacBook’s built-in microphone, assuming I would use them as a roadmap while I built the rest of the track, and then never touch them again. Surprisingly, the tone of one vocal snippet recorded with that microphone fit perfectly into an opening call-and-response section, and that audio will be featured in the final recording.

The lesson here? Go with your ears and go with what works — even if the price tag is surprisingly small.

How do you approach choosing the right microphones for your music? Tell us in the comments below.

Related Posts
Avoid overproducing your music
How to produce a vocal session (when you’re also the singer)
How to choose the right music instrument for you
Using reverb and delay: Lessons from six classic tracks
Using compressors and limiters in your home studio