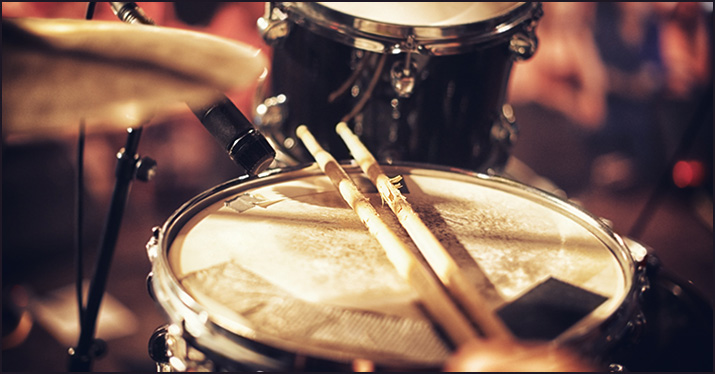 When you’re miking a snare drum and listening to the tones from the drum, what are you trying to capture? What to you makes a fantastic sounding snare drum?

I want to hear a combination of the drum — the hit of the drum and the snares almost equally as loud as the drum. In a standard 4/4 set up, you’re hearing the snare on the two and four. That snare has a space to fill — it’s the answer to the space the kick drum is filling on the one and three. The snare and the kick have to work together to pull the song forward. If you have a great kick sound and the snare isn’t matching it, you’ll have an imbalance.

I think of kick and snare as “Boom! Crack!” The snare has gotta have that crack. It’s gotta have enough bottom that you feel it a little bit, but not enough that it’s going to step on the other instruments that are providing that lower end. But it’s a difficult question to answer, because every artist and song and type of music calls for a particular sound from the drum.

Like any instrument, drums can vary substantially in sound from one to another. I played with a drummer who was a marching band guy, and he had this deep snare drum that he tuned so tight, and there are other guys who go with a really floppy sounding snare. Do you work with the sound the player’s bringing in, or do you try to achieve a certain sound?

As soon as a drummer is set up, I might have an idea of what kind of tone he or she likes. If they have a brass snare or metal snare as opposed to a wood snare or a short depth as compared to a really deep snare, I can get a feel for what their personal preferences are. It’s just like someone coming in with a Strat or a Les Paul or a Telecaster. Many studios have their own snare drums, and a lot of times you might try to convince the drummer to just go with that right from the start.

But the first thing I’m going to do is listen to the drummer play in the room, before I put a microphone on it. Because every drummer plays with different velocities. Some guys hit the snare so hard, and if they do that, I’m going to change the way I mic that snare. I may change the kind of mics I use on that snare, the angle possibly, the number of mics, the distance of the mic to the drum head…

Ok, so let’s say you’ve got a guy who is walloping the snare drum, what do you do?

Sometimes, this is a good situation, because you’re getting less hi hat in the snare mic because it’s not as turned up. One of the biggest problems when you’re cutting a snare is you want to get that snap on the top, so you might be throwing high end on it, and that means the hi hat is coming through. When you work with kits, you often will gate the snare — especially during a mix — and it’s hard to do that when the hi hat is bleeding through too much. 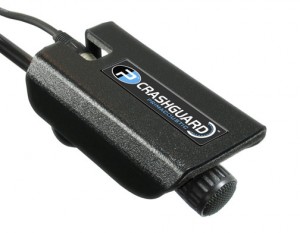 You should consider using a mic guard, which fits on a microphone stand. It shields the mic from sound coming from the hi hat and it makes an amazing difference. I’ve got one that is made of metal, it has a hole cut so the mic fits through, and it’s lined with foam. It’s cupped a bit, so it almost directs the sound into the mic. Back in the ’90s I used to use a homemade shield made out of cardboard.

But it’s happened a lot of times, when somebody is just smashing the snare, that I’ve had to ask them to lay off the snare a little. If you’re in a small room, the snare drum is just taking over, it’s so loud in the overheads, it’s bleeding into all your mics. It’s hard to do, to tell someone, “Hey, change the way you play.” But, often enough, I’ve had to do that. Not only with how hard they play, but drummers who aren’t used to being in the studio don’t hit the snare in the exact same place every time, and then you get these discrepancies between the sound of every snare hit. It’s often their not being accustomed to having mics all over their kit and snare, and when you listen to something on tape it’s like putting a magnifier on it — all the inconsistencies get magnified and the snare tone is all over the place.

What about the drum mic? I always seem to have a Shure SM 57 on the snare. 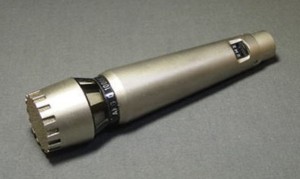 The SM 57 does a good job on the snare, but there are so many great mics. I wouldn’t necessarily go to that mic first. You know what you’re going to get with it, but it’s not necessarily where you should stop. The AKG D1000E is one, it has a low frequency rolloff, which is a nice feature. There’s the Shure SM7B, which happens to make an incredible snare mic in situations with a deep snare. I’ve seen people do crazy things, like put $3,500 Neumanns above the snare drum — it depends on the budget and the tone you’re going after.

How many mics do you typically use on a snare?

If I have the choice, I’ll go with three mics on the snare, every time. Above, below, and on the side. My standard set up might be an SM 57 on the top. I always come from the hi hat side, so the mic cable is coming from the direction of the hi hat, because if you are using a 57, or any unidirectional microphone, it’s picking up sound from directly in front of it and also helping to reject the sound coming from the hi hat. And I’m pointing the mic at the spot where the drummer hits the drum. You can get a different type of tone if you pull the mic off and have it closer to the rim. And of course, different mics can give you different tones, but that’s a whole conversation in itself.

Then I’ll put a small diaphragm condenser a half inch off the side of the drum, pointed directly at the middle of the drum between the rims. That gives you this beautiful sound that a lot of people are not hip to. It’s this chunky sound that you can use to fill in and make the speakers move just a little bit more. The mic on top is getting the “crack!” and the side of the snare is getting this “thwack!” It’s a sound with some body.

Then on the bottom I’m putting an AKG 414 to pick up the snares. A 45 degree mic angle is most common for the top snare position and the bottom head. You don’t want to put it parallel to the head, or you could blow out your mic.

Are you finding you’re having people tune up that bottom head a lot before you’re recording?

I sometimes work with drummers for hours to get their drums tuned to where I think they’re going to reproduce correctly through microphones to the track. You’ve probably experienced this being a drummer. You have your kit, you practice with it, you gig with it, and it sounds great. All of a sudden you put a mic on the tom in a studio setting and it’s like “boooommmm” — it’s ringing like mad. If the drums are tuned correctly, you can work with that bit of boominess. But if it’s not right, it can really be a problem. And I’ve found that in the 20+ years I’ve been working with drummers, 75 percent of them don’t really know how to tune their drums for a recording situation. 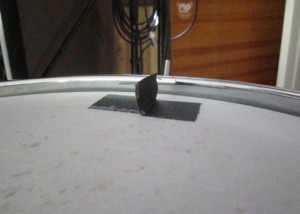 Sometimes they’re ringing even when that drum isn’t even being hit, they’re reverberating — so you’re dampening things, you’re putting little pieces of tape on the drums, that little trick where you fold the masking, gaffer, or duct tape up and have that little flap, that loop sticking up. Somehow that does more than if you just have the tape directly on the head. But most guys don’t have their drums ready for recording. Most pro studios are going to have a kit, like a Yamaha Recording Custom set, in them. And nine times out of ten, you’re going to want to use them. And if they have a kit, they may have multiple snares to choose from as well.

New heads are really important on a snare — especially if they are the power coated type. You get this snap out of a brand new head that you’re not going to get if it’s been beat on. It’s also easier to control the tuning on a new head that hasn’t been all stretched out. And honestly, I’ve changed the snare drum sound song to song. You know, maybe the next song is a little more downbeat, so I want something a little boxier and crispy. If it’s upbeat, maybe something with a higher sort of resonance, so I tune it up a bit.

Can you also achieve some of that with placement or a different blending of those three mics?

Yes, and there’s a decent amount of the snare going into the overheads as well, so it’s a combination of many microphones and balancing it all out. Sometimes you might want to roll off some of the low end from the snare drum to tighten it up a little. But, I’d caution folks not to work on the EQ of the snare drum while the overheads are not on. As soon as you bring the overheads in, you get a different sound. So bring up the room mics, then bring up the snare, top mic first, and then maybe the snare (bottom) mic, and get that to where you want it to be, and then go to the side mic for that extra “thwack.” Not everyone has three mics to devote to the snare, but that’s something a lot of the serious cats do. And back in the days of analog, those three mics were going down as one track. Now with digital, you might be able to have the three mics as separate tracks. But back in the day of 24-track tapes, I’d get yelled at if I tried to keep three tracks for snare.

One other thing to mention is that if you are putting a mic on the bottom head, it’s going to be out of phase with the top mic. You’ve got to hit the phase reverse on that or you’re going to have phase cancellation.

If you had only two mics to work with, which are you losing?

The side mic. Ultimately it’s not as important as the top and bottom.

And if you’re doing one, it’s the one up top.

Yeah, though I have seen situations where just the overheads and a bottom mic are used. Usually that’s in a jazz recording where an open, natural sounding set up is more typical.

Related Posts
How to get better results mixing in your home studio
How to record better tones in your home studio
Getting a great vocal take in the studio
Psychology and the music producer
Home studio posts – recording tips for producers, engineers, and musicians