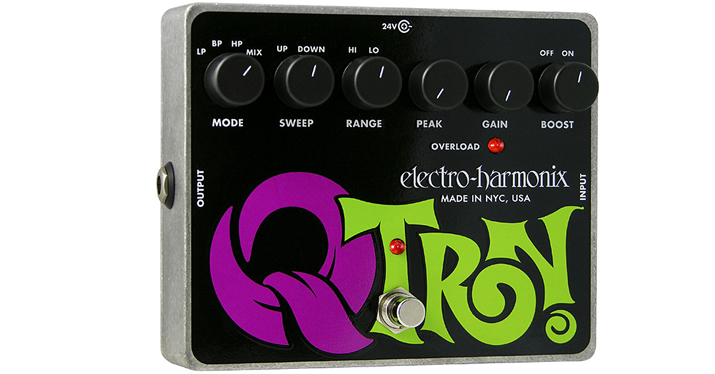 Part 1 rewinds some of the history of these devices, including links and demos of effects pedals in action. In Part 2, we identify current stomp boxes and multi effects units that can help you create signature sounds.

From the first recordings in the 1930s of the Rickenbacker “Frying Pan” and the early innovations by Les Paul, the electric guitar has been the brush that many musicians have used to paint some of the world’s most colorful, new sounds in popular music history.

From the 1960s on, the creation and refinement of new sounds for the electric guitar (or any amplified instrument, for that matter) have often relied on effects units, frequently in the form of effects pedals, also called stomp boxes since they lie on the floor, waiting for the musician to stomp on them to add or remove their contribution to the landscape of their amplified sound.

From the earliest days of recording, musicians and engineers strove to eliminate distortion, which was viewed as “bad sound.” Imagine the lush recorded sound of Frank Sinatra singing over a Nelson Riddle-led orchestra. That “honey and butter” was the gold standard sound for many mid-20th-century pop music recordings.

But some innovative musicians railed against that smooth sound and crafted methods to incorporate those “bad sounds” into their music, hearing them as bold new musical colors and textures that helped fuel the rock ‘n roll revolution. The first type of effect unit developed in the 1960s was the distortion pedal, which added dirt, grit, and boosted the gain (volume) of the original instrument signal. Even earlier, in the late 1950s, Link Wray purposely sought out such a tone by poking holes in his guitar cabinet’s speakers with a pencil, creating a muddy sound that can be heard on his subversive instrumental, Rumble, released in 1958 by Link Wray & His Ray Men.

A different route was taken accidentally in 1961 when a malfunctioning preamp on a recording studio’s console caused Grady Martin’s bass guitar to distort on Marty Robbins’ song Don’t Worry that gave a unique fuzzy character to that instrument’s tone.

By 1962, musicians were able to replicate these new tones with the first commercially popular fuzzbox, Gibson’s Maestro FZ-1 Fuzztone. This little device retailed for $40 and gave guitarists a chance to add distortion effects to their repertoire. One early adopter of the Fuzztone was Keith Richards, who used it on The Rolling Stone’s 1965 hit, “(I Can’t Get No) Satisfaction,” which made the effect’s popularity (and sales) soar. Distortion effects eventually were divided into three separate flavors: Fuzz, Overdrive, and Distortion, based on severity of clipping and how much gain boost could be added to the audio signal.

Gibson wouldn’t remain the only game in town for long. Just in the category of fuzz pedals, new offerings took the music scene by storm in the late ’60s, such as the Sola Sound Tone Bender, and Electro Harmonix LBP-1, which would later evolve into the Big Muff Pi, a pedal that to this day is extremely popular with rock guitarists such as Dan Auerbach (The Black Keys) and Jack White. Another classic model was the Arbiter Fuzz Face, featured throughout the Jimi Hendrix Experience’s 1967 debut album, Are You Experienced, with songs like “Foxy Lady” and “Purple Haze” joining “Satisfaction” as rock classics that relied heavily on distortion for their original sound.

Gear manufacturers would see the potential for growth in the effects market and help grow it from the 1960s to today, where effects pedals represent a $60+ million a year slice of the $7 billion music products market (according to The 2014 NAMM Global Report). With more than a million pedals and effects devices purchased annually, these small but mighty sound shaping tools make up an industry in their own right! We’ll cover a range of stomp boxes, old and new, but in no way is this article meant to be a comprehensive accounting of history’s thousands of different effects devices. Instead, we’ll give you an overview of the most popular types of pedals and explain their basic sound characteristics.

Roland is one of today’s biggest players in the effects world, and they formed the BOSS subsidiary in the mid-1970s to cater to the expanding effects pedal and home studio market. The BOSS compact pedal form factor (approximately 3” wide x 5” long) has become a ubiquitous sight in guitarists’ effects arsenal, setting the general industry standard of what size constitutes a small, single purpose effects stomp box.

BOSS developed highly popular models such as the now classic DS-1 distortion pedal, used by guitarists such as Joe Satriani and Steve Vai, and also established a rich heritage of delay pedals over the years, such as the DD-7, which MusicRadar dubbed “one of the best delay pedals of all time.” Today, BOSS offers a vast array of pedals for nearly every category of audio effect. Demonstrating the infinite possibilities that stomp boxes offer music creators, Talking Heads front man David Byrne has even created a fascinating user-controlled interactive art installation using 96 BOSS pedals.

Founded by Mike Matthews in 1968, New York City’s Electro-Harmonix was an early innovator whose products helped meet the growing demand of the then new fuzz effect craze. Partnering with Bell Labs engineer Robert Myer, the duo produced the Linear Power Booster (LPB-1) distortion effect in 1969 that, through several iterations, would evolve into the Big Muff Pi, a fuzz pedal renowned for its complex and rich distortion effect. The Big Muff made it into many of rock’s most successful guitarist’s bag of aural tricks. David Gilmour can be heard using it on Pink Floyd’s Animals and The Wall, and The Red Hot Chili Peppers, Nirvana, and 311 are a few other notable users.

Electro-Harmonix also pioneered an altogether new way to achieve the much-desired delay effect, where an initial note played will be repeated at decaying intervals, like hearing your shout echoed back to you from a canyon or a cave. Previously this effect could only be achieved by looping a piece of audio tape in a tape recorder type device such as an Echoplex. Electro-Harmonix created a new way to achieve stunning delay effects with the Memory Man, which could create echo with integrated circuits instead of moving analog tape over a set of recording and playback heads which require regular ongoing maintenance and repair. The Memory Man was a breakthrough effects pedal that offered lower cost and no need for maintenance or tape replacement as did the Echoplex.

A Visit to the filter farm

We’ve discussed distortion and delay pedals, but what other types of popular effects units are available today? There is a wide assortment of effects that manipulate sound by filtering the audio frequency of an instrument’s audio signal. Equalizer (EQ) effects allow the musician to boost or cut selected bands of the audio frequency spectrum, just like the EQ on a stereo system. Some EQ effects are tailored for a specific instrument, such as the BOSS GEB-7, which narrows the affected frequency bands to a spectrum useful to bass guitarists.

Perhaps rock, disco and funk’s most iconic sound filtering pedal is the Wah Wah, the most archetypal being the Dunlop Crybaby Wah Wah (based on the original design by Thomas Organ Company/Vox from 1966). By rocking its treadle back and forth, this pedal sweeps up and down the frequency spectrum of an instrument, like turning the tone knob on an electric guitar back and forth while playing. This action can produce vowel-like sounds, similar to human speech. A healthy dose of Wah Wah is used on Isaac Hayes’ classic theme from the film Shaft. Eric Clapton on Cream’s “White Room” and Jimi Hendrix “Voodoo Child (Slight Return)” are other consummate Wah Wah examples that really show how the effect can add beautiful, expressive tone to the guitar.

Cousins to the Wah Wah, that eliminate the need to rock a treadle, envelope filters, or auto-wahs, employ a piece of circuitry that uses the strength of an audio signal to select which band of frequencies to boost. This too creates vowel-like sounds and has also been a staple in the funk world, particularly for bassists, like Bootsy Collins, heard below on Parliament’s classic “Mothership Connection” and his time playing with the Godfather of Soul, James Brown. Some classic examples of an envelope filter are the Mutron III (the first pedal of its type), and Electro-Harmonix’s Doctor Q and Q-Tron.

Phasers and Flangers are a different category of filter effects, called Modulation Effects, which have tonal similarities to one another, but employ different filtering approaches. Both mix the original (dry) signal with an altered signal that is out of phase with the original signal, or, put another way, the peaks and valleys of the altered sound waveform trail behind the original waveform resulting in what are now iconic sounds in pop music. A phaser mixes in an altered signal that changes based on the frequency of the original signal. This creates a new, modulated waveform characterized by a “whoosh” sound.

Check out Eddie Van Halen’s classic phased and overdriven guitar that kicks off the tune, “Ain’t Talking About Love” which relied on Dunlop’s MXR Phase 90 to help define his guitar sound on this and many of his classic recordings. (MXR, one of the pioneering stomp box innovators, stopped making pedals in 1984, although Dunlop has licensed their name and brought many of their classic ’70s and ’80s stomp boxes back into production.)

In the case of a flanger, the altered signal is delayed slightly (5-20 ms) from the original but remains consistent in terms of its frequency. It is then mixed back in with the original uniformly, which creates a more consistent sound than a phaser. Flangers are sometimes described as having a jet-like sound quality. The earliest flanging effects, created by playing back two identical reel to reel tapes of the same program simultaneously and then delaying one ever so slightly, often by putting a thumb on the metal tape reel as it played (those reel parts are known as flanges, hence the name) can be heard on songs like the Beatles “Lucy in the Sky with Diamonds” and the Small Faces “Itchycoo Park.” Heart’s Roger Fisher built his own early flanger effect from a kit that can be heard on their track “Barracuda.”

Not straying too far from phasers and flangers, chorus effects, once again, modulate the original signal with an altered one, this time also varying the pitch, often only a very tiny bit. Just like no two human beings in a singing chorus can be perfectly in tune with one another, a chorus effect can give a bit of a multi-instrument feel to a guitar or keyboard, adding depth to the timbre. Listen to The Police’s Andy Summers guitar on “Walking on the Moon,” or Nirvana’s “Come as You Are,” to hear just what a chorus can add to a single guitar part. Kurt Cobain used the Electro-Harmonix Small Clone for much of the band’s chorused guitar sound.

Joshua “Schwa” Monley is a musician gigging around Sacramento, CA. He plays bass in the bands Schwamigos, Chickeebob, and The Jilted Lovers. His sounds, including his Schwaudio solo work, can be heard at SoundCloud.

Read More
The history of the incomparable Gibson Flying V guitar
What is the difference between loudness, volume and gain?
Home studio posts – recording tips for producers, engineers, and musicians
Music production basics – Part 1: amplitude and automation
Use hammer-ons and pull-offs to energize your chords