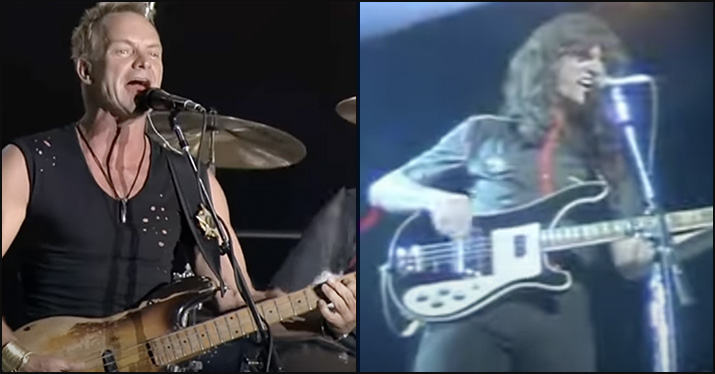 Being excellent at your instrument takes a lot of work, and being a stand-out vocalist is rare, indeed. But combining the two? Let’s learn from 10 singers who also play bass.

Singing while playing an instrument takes a particular talent — it’s difficult to do both simultaneously.

It’s particularly true for bassists. Between the demands of the instrument — in and of itself and in the context of the band — and the tasks of lead (or back-up) vocals, making your brain do both things at once may sometimes seem impossible. It’s not, and here are lessons learned from 10 notable bassist/singers. Or singer/bassists. You decide.

Why is it hard to sing and play an instrument at the same time?

I was at a jam session this weekend, surrounded by musicians who were much more talented than me. When we began playing a Velvet Underground song, I started to sing. A second later, my buddy placed a mic in front of me and we continued until the song was over.

After apologizing to humanity for the war crime that was my vocals, I asked if anyone else wanted to (please) take the mic, but they all adamantly declined. The bassist, who was brilliant, specified that he could either play bass or sing but not both. The drummer said he could do both but he’d need to go home and practice each song for a few hours. The other guitarist just flipped me the bird.

As the only person who could play an instrument while singing, I continued to inflict lasting damage for the rest of the night.

So, yes, many musicians find singing and playing an instrument at the same time to be a challenge. It’s not just that you’re doing two things at once, you’re often doing three to five things at once. A guitarist, for example, has to move their two hands independently of each other, while a drummer is having to move four limbs at once; and then you throw singing on top of that and it can be too much for some people to process.

But why is it so hard to sing and play the bass?

I can’t speak for playing the drums and singing at the same time, but when it comes to playing the guitar and singing, I don’t find it too challenging as long as A) I’m playing rhythm guitar, so I don’t have to worry about complicated finger movements, and B) neither the vocal or guitar parts are too rhythmically different from each other. There are definitely songs that mess me up if the vocal rhythm strays too far away from the guitar rhythm.

And that’s why bass playing and singing is so hard. Bassists have to move their fingers in intricate and sometimes complicated ways to form a secondary melody line, distinct from the vocal melody; and the rhythms, too, are often at odds with the vocals. In fact, bassists very often have to mentally keep track of three rhythms at once: the song’s pulse, the bass guitar’s rhythm, and the vocal rhythm.

How to play bass and sing: learn from the pros

Paul McCartney, one of the all-time great singers and bassists, struggled to play the bass and sing at first and likened it to “patting your head and rubbing your stomach at the same time. So I had to put special effort into that, which made it very interesting.”

But he figured it out.

Larry Graham, the man who invented slap bass, can not only sing and play bass at the same time, but he can dance, too.

I’ll leave the dance tips for another article, but if you are struggling to learn how to sing and play bass, don’t give up. As you’ll see, all of the best singer/bassists struggled to learn too. Here are their tips so you can master the necessary skills.

It will come as no surprise that singing and playing bass takes practice, and lots of it. Every single singing bassist — Sting, Paul McCartney, Les Claypool, Geddy Lee, etc. — upon being asked how they managed to do it, says that they had to put in hours of practice. But how exactly do you practice this skill?

Step One: Divide and conquer

If you are struggling to sing and play a certain song, it helps to first master each part before trying to put them together. And when I say master, I mean you have to know each part to the point where you don’t have to think about how to play or sing either.

The master himself, Geddy Lee, once said about singing and playing, “There were a number of times where I thought it was impossible and I could never pull it off, but for me it was always a matter of learning the bass parts first and learning them so well that I didn’t have to think about them while I was singing. And then, you know, concentrating on the vocal part of things.”

One of the most famous singing bassists, Sting, said, “I could slow the playing down, slow the singing down — I saw where the gaps were and like a jigsaw puzzle fitted it together.”

Bassist Katie Thiroux offers up a tasteful — and complex — example of her cover of “If I Were a Bell,” and what’s more, in this video, she even breaks down how she figured out how to do it. Well worth watching the whole thing.

So that’s how to practice. Here are some tips for when you decide you want to write your own music.

Kim Deal of the Pixies: “[Singing and playing the bass is] so hard. It was so much different from playing rhythm guitar and singing. I really had to practice. Since what I sing with the Pixies is usually not the lead melody line, it doesn’t always start at the top of the four-count, so that makes it hard, too.”

Not only was practicing key, but she also kept things (relatively) simple. In the example below, notice how she just plays one line over and over and again. Simple right? Well, sort of. The bassline is syncopated compared to the song and is a whole beat off of Kim’s vocals. But because she repeats the line over and over again, she’s able to mix things up with her vocals.

Another way to keep things simple is to have your melody and basslines be similar to each other, a la “Sunshine of Your Love,” by Cream, featuring Jack Bruce.

OK, maybe you want to kick things up a notch. If so, try a sort of call-and-response thing, where you keep the basslines simple while you’re singing (e.g. sticking to the root and fifth or root and octave), and then, when you stop singing, throw in a lick or two. Check out Thundercat. He keeps things (relatively) simple until he takes a breath. Then he goes into beast mode.

Let’s say there are parts of a song where you just can’t get it, no matter how hard you try. That’s OK. Just simplify the bassline on that part to let your vocals shine through. Let’s quote Geddy again, “If ever there was a conflict between what I was playing and what I was singing, I would slightly rearrange what I was playing to make it somehow easier for me to actually get the syncopation of the two together.”

Or, just be Les Claypool…

10 thoughts on “Who says it’s impossible to sing and play bass?”