Whether your playing acoustic or electric guitar, hammer-ons and pull-offs can be a dynamic addition to your repertoire. 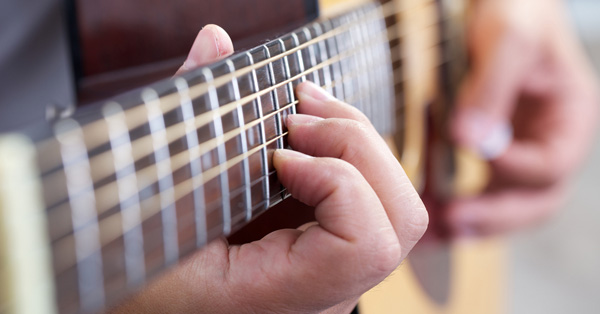 Part of developing as a guitarist is learning how to dress up chord progressions so they don’t sound stale and boring. One way to make your chord playing more dynamic is to incorporate hammer-ons and pull-offs.

Hammer-ons and pull-offs use the fretting hand instead of the picking hand to articulate notes. They allow you to play more notes faster, and with a smooth, flowing sound that transforms tired chord progressions into catchy, melodic phrases.

Here’s what you need to know about hammer-ons and pull-offs and how to apply them to your chord work:

Hammer-ons and pull-offs are part of a technique called legato, which means “tied together” in Italian. Legato allows you to pick the strings a lot less, which makes for a more fluid sound, especially when playing fast. One note flows directly into the next with no intervening silence.

How to play a hammer-on

The vibration from a hammer-on is generated from the force of your finger hitting the string. To execute a hammer-on, strum a note with your picking hand (say an open fourth string D note) and use a finger on your fretting hand to hit the desired higher note on the same string (try a fourth string, second fret E note). The sound is different to that produced by picking both notes individually. The hammer-on produces a quick transition between the two notes and slurs them together.

Adding a hammer-on to a chord

Strum a D chord and immediately hammer on a first string, third fret G note with your pinky finger. Come down with enough force to make the note sound clearly without having to pick it with the picking hand.

How to play a pull-off

Think of a pull-off as the opposite of a hammer-on. A pull-off can generate vibrations, whereas a hammer-on will only carry on the leftover vibrations from a previous note. To execute a pull-off, strum a note with your picking hand (try a fourth string, second fret E note) then pull your fretting finger off with a down and out motion to a lower fretted note (try pulling off to the open fourth string D note).

Don’t just lift your finger off, actually pull it slightly in toward your palm and down just before you release it so that when the finger leaves the string, it performs a kind of pluck of its own. And if you’re pulling off to a fretted note (a fourth string, third fret F note to a fourth string, second fret E note for instance), you need to finger that note (the E note in our example) in advance before pulling off (the F note).

Adding a pull-off to a chord

Let’s try a Dsus4 to a D chord pull-off. Strum the Dsus4 chord and immediately pull your pinky finger off the first string, third fret G note with enough force to sound the first string, second fret F# note of the D chord. Remember that you must “pre-fret” the F# note with your middle finger before initiating the pull-off. You are basically using your pinky that is fretting the G note to pull-off and “pick” the F# your second finger is fretting.

Now let’s try putting both techniques together. Again, working with the Dsus4 and D chords, strum the Dsus4 chord and immediately pull your pinky off the G note. After the F# note sounds, lift your second finger up off the F#, strum the chord with the first string open E note, and then hammer the F# back on. You will have strummed two chords for a total of four chords sounded.

The trickiest part about legato technique is getting the notes to sound clean and even in volume and time. If you have a metronome, use it to work on your hammer-ons and pull-offs. Start out slow. The cleaner and easier it gets for you, the faster you can go. If you are having trouble with a particular finger, isolate that finger and practice with it until the finger gets stronger. Remember to play up on your fingertips.

You’ll probably notice that hammering on with your pinky is a bit more difficult than it is with your other fingers. That’s because the pinky is typically a little weaker. It’s a good idea to spend a portion of your practice hammering on with just the pinky. This will help to build up strength in that finger. 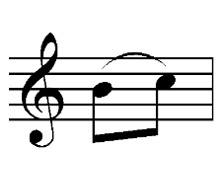 Hammer-ons and pull-offs are written on notation and tab with the word legato or with a little arc, or slur, over or under the notes that are to be played using this technique.

Kathy Dickson works at Guitartricks.com, an online subscription service that has provided online video guitar lessons since 1998. The site has more than 11,000 video lessons with 600+ song tutorials and more than two million members. With an unending appetite for improvement, via ongoing course production and licensing negotiations, the site continues to expand and progress.

Read More
Guitar care: humidity extremes can damage your instrument
Guitar intonation: how to keep your guitar in tune
So this guitarist walks into a recording studio… 15 tips for recording guitar
Two Defining Moments for a Guitar Player
Songwriter’s block: where does it come from?