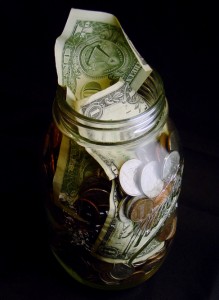 Remember the Seinfeld episode where George goes to give the guy a tip at the pizza place, but the guy doesn’t see him put it in the jar and he tries to reach in and take his money back?

It’s funny because most of us can relate to it (well, hopefully not the part about reaching back into the jar!). If we’re being totally honest, when most of us give someone a tip we want them to see us doing it. We want them to feel like they’re getting hooked up and a part of us wants to be acknowledged for making a contribution.

So what does this have to do with music? Well, do you think this might relate to selling CDs and merch at your shows? Is it possible that fans who support you would like for you to see them supporting you? I think so.

So how would we facilitate this? Well, for one, if you’re playing a bar or small venue and you can position the merch table wherever you like, why not put it as close to the stage as you can? And wherever the merch table is, make sure that that’s where you are after the show.

An artist I worked with decided to put the names of all of her fans who bought her pre-sale CD packages on her website. She also had a contest for whomever purchased the most tickets to an event and serenaded the winner at the show. A little creativity goes a long way. What other ideas can you come up with to acknowledge your fans for their support?

76 thoughts on “The Tip Jar Effect”