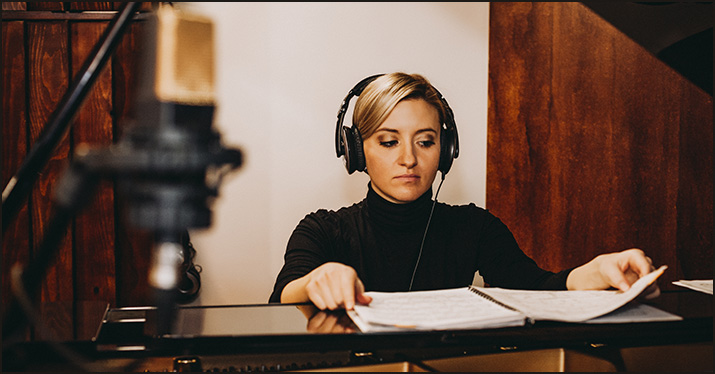 Producer/engineer/studio owner Jon Marc Weiss discusses piano miking techniques on different instruments in different settings to get the tone you need for the situation.

You’ve said that recording a piano is rather difficult as compared to most other instruments. I assumed the opposite. Why is piano such a challenge to record?

There are just so many factors to consider with a piano. Pianos are incredibly dynamic instruments. They also have a wider frequency range than most instruments and there are so many different miking techniques you can use to record them. You just have to determine what kind of tone you’re trying to get and then start experimenting with mic placement around the piano. Many microphones tend to get overdriven when recording piano, especially in dynamic songs, so it’s probably a good idea to start with your microphone pad on. If your mic doesn’t have a pad, then you’ll have to pull it away from the instrument a bit. However, keep in mind this will change the tone pretty dramatically.

Also, weather conditions can really affect a piano, like any acoustic instrument. When humidity is high, the piano is probably going to sway off of A440 Hz. In a pro studio, they’re going to have humidity control. In something less than a pro studio, you’re going to be dealing with something that’s 440 and a half, or 339 or 441. Of course, with pitch control software, you can bring the track up or down a couple of cents to get it right in the track, as long as the piano is still in tune with itself.

Humidity can affect more than just the tuning of the instrument. It can create a darker overall tone, and for some perfectionists, the tone can be affected so much that they may not want to record that day. I had a classical pianist do this to me once.

What about recording a grand or baby grand, having the top open or closed will make a huge difference, right?

Absolutely – a huge difference. When the lid is up, the sound is bouncing off the bottom of the lid and it’s being directed out towards the audience. You’re going to get more articulation and a more defined sound with the top up. Most pianos have at least two options in regard to how open you can have the lid.

When the top’s down the sound being picked up is more indirect, and as a result, the overall tone is darker and rounder.

What about in a live setting? I’ve noticed people like Elton John and Billy Joel have the tops down when they’re playing live.

In a live situation where you see someone playing a grand piano on stage with a full band, you’ll probably find that the top’s down. This is mostly because there are so many other sound sources that can get picked up by the mics, along with the potential for feedback. Also, for a rock tone, I think it’s a little more common to have the top down. It softens the sound, makes it a little more round and less pingy, which works better for rock ‘n roll, generally speaking.

A real common method of miking a piano in a live setting is to use a PZM (Pressure Zone Microphone), which is a flat mic that people will tape or velcro to the underside of the lid. You can even use a PZM in a situation where you’re opening the lid as well.

The PZM is omnidirectional, it’s going to pick up the sound from everywhere, and there’s a lot of reflectivity going around because the PZM is a plate, maybe 5×5 inches, or 8×8, and there’s a little mic in there that picks up the sound that’s reflected off the plate into the diaphragm. So inside a piano, it’s picking up all the resonance and reflections going on.

A lot of times, you’ll also see people using a dynamic mic for a piano in a live setting. There’s almost always enough space in the body of the piano to fit a dynamic mic. Sometimes you’ll see the top cracked just enough to get the mic stand in.

So what about recording a grand or baby grand piano in the studio?

I don’t think I’d use a PZM in a studio because you’re usually trying to get something a little bit more defined than you’re going to get out of a PZM. Though I’ve seen someone use a PZM on the lid and then a matched pair of small-diaphragm condensers in a perfect XY pattern pointing to the low and high side of the piano. The PZM, in this case, fills in the missing pieces that the condensers don’t pick up – the very high and low ends that might be missed, plus additional resonance. Another mic technique that works really well is the M-S (middle-sides) technique. This is achieved by using two mics: one that’s bi-directional (like a ribbon or multi-pattern condenser) and one that’s cardioid.

In a pro studio, I’m probably working with up to five microphones. I’ve got a small condenser microphone pair in an XY – in fact, I’ve seen three condensers used, on the high, low, and middle keys. I’ve seen someone take a tube mic and place it right next to the player’s head to get the perspective of the player. How important the track is to the song is a big influencer. If it’s a solo piano piece, and I wanted the biggest, most beautiful piano sound ever, I would also throw a couple of mics out in the room.

Mic placement in a studio environment is everything. If the mic is placed close to the strings, you’re going to get this really articulate sound, whereas if you’re further away, it’s going to be more rounded. People sometimes want to go right to EQ, but that’s not always the answer. The answer is, use your ears. You can get more high end out of an instrument just by changing the axis of the mic, the proximity of the microphone to the instrument, or moving the instrument to different parts of the room. Maybe you’re in a part of the room with too much baffling and you need a spot that’s more reflective – maybe near a wood wall or a glass window, each will give you a different sound.

How about with an upright?

Let’s say you have access to a piano that’s not in your studio, but you want a live piano track, any advice for that?

I’ve seen someone take a laptop and a little preamp and record a piano from someone’s living room. That’s not uncommon, you don’t need much to pull that off. I remember this story of someone going to a music store, and recording some beautiful instrument there, and bringing that track back to their studio.

But if you’re going to use this idea and go to someone’s living room to record a piano, you’re probably going to find that it’s not in A440. In a pro studio, they literally have guys on call, and if they have a session coming up, or every week, they’ve got these guys coming out to make little tweaks. At someone’s house, they might have that piano tuned once every couple of years – not to mention the humidity and environmental factors.

I know you’re a fan of the DAW piano modules out there these days.

Well, as we’ve said, piano is somewhat difficult to record, but even more so, it can be difficult to find a great piano to record. There are so many factors with a live acoustic piano. If you’re in a situation where you have a DAW and it’s computer-driven, you have to go and check out some of these software instruments. You’d be hard-pressed in a home studio situation to get that kind of tone.

If the artist really wants to play a real piano, that might be a good enough reason to use one, but if you’re just trying to add a piano track to an arrangement, a software instrument is really a good way to go. These days, a software instrument will give you a lot of the things we’ve been talking about. You can open the lid, close the lid, half-close the lid, put different microphones of choice at different distances from the strings. I think some of the best-trained ears in the business will have a hard time deciphering real piano over the latest software instruments that are out there.

Personally, given the choice, I probably would opt for an acoustic piano, but I’m not missing anything in my home studio with the modules I have. I really believe that there are only a few studios in Philadelphia that are going to get a better piano sound than I can pull out of my $300 software instrument.

One thought on “Piano miking techniques for the studio and stage”