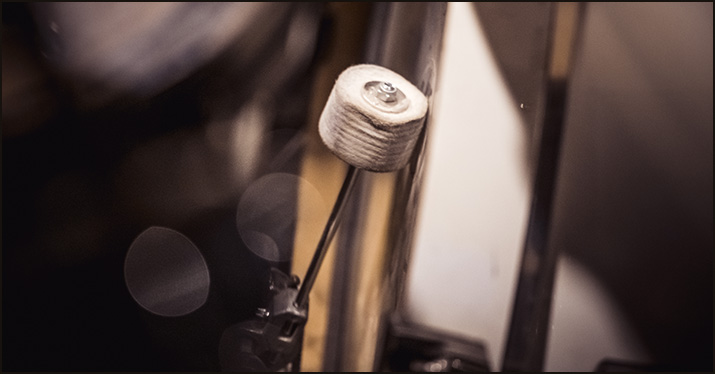 When recording a kick drum, I’ve seen people stuff all sorts of things in there to try to control the ringing. What are your recommendations for what to use and how much?

The first thing I do when recording kick drum is have a drummer take everything out of the drum and listen to what’s going on. You need to make sure that the beater head is evenly tuned, to start with. You’ll get some strange ill effects if you’ve got one side tuned higher than the other. You kinda get this “ba-uum” sound with an additional tail to the hit.

For muffling, I’ve used sandbags, really thin ones, like the ones you might find for physical therapy or something – those things filled with sand are awesome inside a kick drum. A pillow or dense foam can work as well, but they tend to absorb some of the high-frequency energy, so keep that in mind.

But I’ve worked with drummers who won’t take their front head off and refuse to cut a hole in it, and I’ve had to work with that. In some cases, they got the tuning to sound pretty amazing, so it worked out pretty well. I wound up putting a mic on either side of the bass drum, with the front mic out of phase, and the end result was actually pretty good.

The biggest issue with having the mic outside the drum is the bleed. Bleed from the cymbals and from the other drums, which can be a real problem for the kick, because it’s driving the entire song and a lot of times, when you’re mixing, you want to gate your kick and snare. I wasn’t able to gate the kick and had to work with more of an open sound, which isn’t always a bad thing.

So you used the overheads and a mic on the front (non-beater) head?

Yes, and with good results too! It really depends on what you’re trying to capture, as well your budget. I’ve heard some decent home recordings where there was a mic in the kick or in front of the kick and a pair of mics overhead and it can work really well, depending on the room you’re in.

Ideally, how many mics are you using on a kick drum?

Two is pretty typical. I usually start with a mic in the middle of the drum pointed at the beater at a 45º angle. You don’t really want to put the mic right behind the beater, facing it straight on, because you can pretty easily over-extend the diaphragm and distort the transformer, as well as produce other unwanted effects.

The next thing I do is make a teepee. You take a boom mic stand at a 90º angle, and you place the arm of the boom on top of the kick drum – making sure there’s foam or something between the stand and the drum so you don’t scratch the drum up. Then take a heavy blanket, like a moving blanket, something really dense, and you make a tent out of it. At the end of the tent, I put a shotgun microphone (like the Sennheiser 416), and that’s where I get the extended low end. You can use any mic, really, but I prefer the sound of the shotgun.

Sometimes I might add a third mic on the beater side, in front of the beater, to pick up the beater sound. Those three together are pretty amazing, because there are lots of situations where you might want to hear the heavy beater sound and even pick up the pedal noise as well. Like Paul McCartney’s, “Dance Tonight,” where the whole thing is driven by the kick drum… it just sounds a little more natural, like you’re in the room. It’s certainly not right for every situation.

What are your go-to mics? 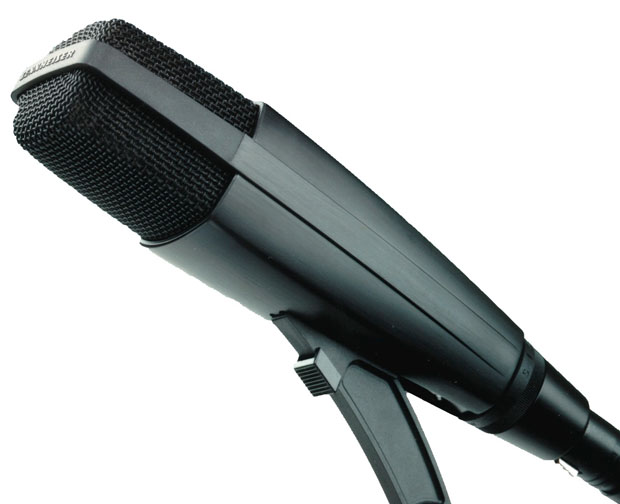 There are so many great mics, and so many mic techniques you can use, but the first one I’m typically going to go to is the AKG D112. If I’m going for a darker tone I’ll grab my vintage AKG D12E or an Electro-voice RE20. Another mic I like to use is the Sennheiser 421 – there are three generations of these and each one provides a slightly different tone.

I’ve mic’d my kick drum where, rather than having the mic all the way inside the drum, it’s just crossing the threshold of the head – the front end of the mic is just peeking into the drum.

I have a couple of issues with that, especially if the hole is close to the same size as the mic. First, the air is going to constantly be hitting the mic. Now you probably have a pop filter on there, but that can ultimately produce some very ill effects. All the air is moving in and out of that hole, and that air is going to move the diaphragm unnecessarily. There’s air moving even after you hit that drum. You’re making the diaphragm move when it doesn’t have to.

Maybe for live that could work, but for the studio, I’m always working somewhere in the middle of the drum. Sometimes I’m no more than 2″ from where the beater is smacking the head, and that’s going to give me a real tappy sound. As I pull the mic further from the head, it’s going to take away some of that articulation and give me a more boomy sound. You really can change the sound quite a bit by altering the angle and pulling the mic either in or out.

Do you have a preference for the material the beater is made out of?

It depends on the style of music. I’ve had situations where I’ve changed out the beater, from a felt beater to a wood or a plastic beater to get a little more attack. I’ve also taped a coin, a quarter or a dime, onto the head on the beater side, to get this tappy, heavy metal, Megadeath “click” to the bass drum sound. You can buy these pads from Remo (Falam Slam) that do the same thing. It’s not a sound everyone loves, but it can work well in songs that have a lot of heavy guitar tracks.

Any other insights before we go?

I used to see a lot of the Yamaha NS-10 Subkicks in front of a kick drum, but over the years, that’s been waning in favor of a larger, more punchy and controlled sound. These days I’m seeing more Neumann U 47 FET microphones on the outside of a kick drum — in tandem with an inside beater mic — than anything else. I was originally surprised to see a $4k microphone in front of a kick drum, but there’s no denying just how great it sounds! However, most of us, including myself, are unable to afford a $3-4k microphone for this use. The good news is there are many clones of the 47 FET available on the market these days. For example, the United Studio Technologies UT FET47 can be had for around $799 and there are others as well. The idea here is to use a large diaphragm condenser with fast electronics to really move some air. I’d stay away from attempting to use a tube mic for this purpose as it’ll sound a lot more wobbly and undefined. Based on how great the large-diaphragm condenser (LDC) FET mics sound, I think they’ll be staying around for some time, unlike the fate of the subkick.

2 thoughts on “How to record a kick drum”