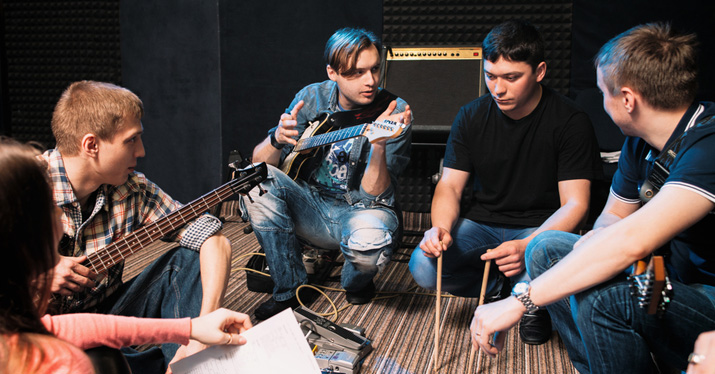 Here are four strategies for breaking down barriers using drum lingo so you can communicate with your drummer and create a healthy groove.

You wrote a great song. You hear the groove in your head, but your drummer isn’t playing what you’re hearing. You’re getting frustrated – and so is he – but you can’t figure out how to tell him what you want because you’re not speaking drum lingo. You’re waving your arms at him and making unintelligible sounds. He’s looking at you like you’re speaking in tongues. There has to be a better way!

Thankfully, there is. Here are four strategies for breaking down these barriers using drum lingo so you can communicate with your drummer and create a happy band and a healthy groove.

1. Learn the basic parts of the drum set and how they work together

Unlike the guitar, piano or bass, the drum set is comprised of separate instruments that join forces to create the overall sound. Knowing the names and functions of the bass drum, snare drum, hi-hats, cymbals, and toms will help you communicate in the drum lingo and explain what you are hearing. For example, use common expressions like “four on the floor” to ask the drummer to play the bass drum on all four beats of the measure, or ask for a “broken groove” to indicate that you do not want a traditional backbeat with the snare on beats two and four.

As session drummer Rodrigo Bonelli explains, “I like it when someone can be specific and tell me to play on the toms, try a busier hi-hat pattern, or switch to the ride cymbal. They should know the difference between brushes, mallets, sticks, and rods to communicate texture changes too. It really helps if they use the right terminology and technical expressions. That stuff is going to save you so much time in rehearsal if you can explain it correctly.”

2. Explain the form and structure of your tune in addition to drum lingo

It’s not just drum lingo that will help you communicate with your drummer. Use terms like Verse, Chorus, Bridge, Interlude, and Outro to refer to the sections of the song, as opposed to lyrics or chord changes that might not be directly relevant to the drums (even though the drummer might be familiar with them, anyway). For example, you can say “I’d like the feel to change when we get to the second chorus” or “switch to different a groove at the bridge.” It’s also important to use expressions like “half-time” and “double-time” in the right context when explaining a change in the feel. People often confuse a double-time feel with being “faster” when it’s actually just twice as much being played in the same amount of time.

As Bonelli puts it, “I’ve been in lots of situations where the artist wasn’t sure what they wanted from the drums. I like to get direct information from them without the poetics. I feel like anything that expresses dynamics is really useful, and it’s important to use the right adjectives. If they can sing the pattern and rhythms to you, that’s even better.” He adds that “for the drummer, listening to the way the artist plays and sings a song can be just as useful as their descriptions.”

Along with verbal and musical communication, learning to write out basic drum grooves is a major benefit. These grooves can be highly detailed, or just rough sketches of the bass drum, snare and high-hat patterns. Many drummers like to write their own shorthand notes and create a “road map” to help them remember new material, so you can save a lot of time if you’re able to communicate your ideas this way.

As composer and guitarist Vern Woodhead says, “I like to write out specific drum patterns for each section of the tune and be clear about the section length and form, while encouraging them to fill in the spaces creatively. After learning to play drums myself, I began to understand that giving the drummer less on the chart will create a more natural feel for the piece overall, especially with good drummers.”

If all else fails, jump behind the kit and show the drummer what you want. Your technique doesn’t have to be perfect, but learning to play some basic drums can be valuable in gaining an understanding of the instrument, and for to your overall musical growth. As Woodhead explains, “learning to play drums has helped me realize how much is in the kick, snare, and hi-hat. It has made me more aware of simultaneous rhythms. I can explain things better in rehearsal, and it’s also helped me to maintain a steadier strumming pattern on guitar, especially when I’m singing. As a singer, it’s helped me to make the pronunciation of my consonants more percussive so the words become clearer and people can understand the lyrics better.”

Most importantly, it is essential for band members approach these rehearsal interactions with patience and understanding. Bonelli muses that, “drummers have more knowledge these days than years ago. We have to know our own stuff and everyone else’s too.” Learning to identify the parts of the kit, using the right terminology and drum lingo, writing out parts, and learning to play basic drums will help to break down these barriers, easily communicate with your drummer, and put your band on the path to success.

Brooklyn-based session drummer Rob Mitzner has appeared on over 30 commercially available recordings and film soundtracks, and was recently featured in Modern Drummer magazine. His latest credits include the album Action Moves People United, which entered the Billboard charts at #8, as well as Outside Mullinger (Broadway), a performance for President Obama in his hometown of Washington D.C. and a show a Lincoln Center. He holds a B.A. in Music and Political Science from Brown University, where he received the William H. Westin award for Outstanding Musical Performance.

5 thoughts on “Want to communicate with your drummer? Learn drum lingo!”