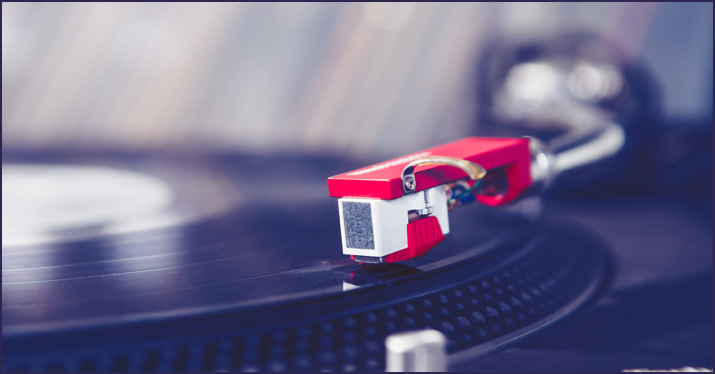 Modern vinyl records have existed for over half of a century, and while they almost faded into obscurity, the vinyl record revival is picking up steam every year.

1. The widest distribution in the universe

Perhaps the most famous records in the universe are the two copies of the Golden Record placed aboard the Voyager 1 and 2 spacecrafts. The Golden Records feature musical selections from different cultures and eras, spoken greetings from Earth-people in fifty-five languages, and other messages. Each record is encased in a protective aluminum jacket, together with a cartridge and a needle. Instructions, in symbolic language, explain the origin of the spacecraft and how the record is to be played. Today, Voyager is nearly 12 billion miles away from Earth.

Beethoven’s Fifth Symphony, performed by the Philadelphia Symphony Orchestra under Leopold Stokowski, was the first 12-inch recording released by RCA Victor in 1931. Victor’s new vinyl-based Victrolac compound, which was used for this recording, provided a much quieter playing surface compared to the shellac typically used for 78s.

Songs closer to the label and spindle hole on a record can sound audibly different than those on the outer edges due to what is known as inner groove distortion. At the beginning of the LP, on those outer grooves, the audio signal is cut across a relatively long section of vinyl, and the longer a signal is spread out across the medium, the higher the quality. When you get to those shorter grooves near the spindle hole, the signal is transferred to a much shorter section. The audio information, in the form of ridges and valleys, is closer together, and the more dramatic curve of the groove can affect the needle’s ability to track and read the information accurately. When producing a record on vinyl, the recommendation is to keep the louder, bass-heavy tracks at the front and the softer tracks for the end of the programs.

Turntables can track color vinyl differently than black vinyl, and some people report skips on color record copies which do not happen on the same record if pressed on black vinyl (typically on lower-end turntables). Some people say the music itself can sound slightly different on color vinyl versions versus black vinyl versions of the same record. However, since the grooves are the same, this likely has more to do with the type of turntable or cartridge being used. Standard black vinyl is the quietest in terms of surface noise, followed by transparent colors and opaque colored vinyl. Random (recycled) color shades, split or splattered, glow in the dark, and glitter records are comparatively much noisier.

While audio mastering engineers preparing a recording for transfer to vinyl will adjust the groove pitch to account for dynamics in the program (i.e., louder and softer sections of your music), there are maximum and minimum depths permitted. Too much low frequency information combined with a lot of information spread across the stereo field can result in the stylus jumping out of the groove and skipping. Too shallow and narrow a groove, and the recorded sound can lose its stereo image and suffer from low volume.

On June 21, 1948, Columbia Records put the needle down on history’s first successful microgroove plastic, 12-inch, 33-1/3 LP in New York. According to the Wired.com article “Columbia’s Microgroove LP Makes Albums Sound Good,” engineer Peter Carl Goldmark “set out with his staff to evolve the 78-rpm record to 33-1/3 rpm” in an effort to “extend playback time to more than 20 minutes per side and shrink vinyl grooves to an accessible, acceptable millimeter size.”

Considering the term “vinyl revival” is an actual Wikipedia entry, we can declare it’s a legitimate phenomenon. The sales numbers back it up. According to Billboard, vinyl record sales hit a Nielsen Music-era high as vinyl sold 14.3 million units — up 9 percent over 2016’s 13.1 million. That’s impressive, as 2016’s numbers were up 26 percent over 2015, and this marks 12 consecutive years of growth in sales.

Record Store Day is a celebration of the enduring importance and coolness of the independent record store. According to the Record Store Day website, it’s a “day for the people who make up the world of the record store to come together and celebrate the special role independently owned stores play in their communities. Special vinyl and CD releases and various promotional products are made exclusively for the day and hundreds of artists across the globe make special appearances and performances.” Record Store Day is June 12, 2021.

A musician, writer, and marketer, Andre Calilhanna manages and edits the Disc Makers and BookBaby Blogs. Email him at andre@discmakers.com.