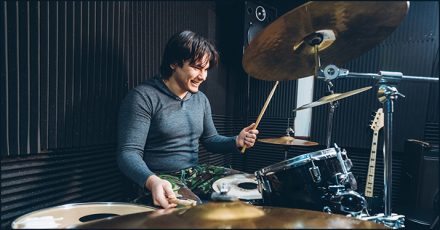 Mixing drums can be challenging at times, so we’ve put together some tips and tricks to get a clearer, more polished mix in your home studio. Find out the best ways to compress a kick drum, EQ your snares, treat your percussion, and more. Read more.

I’ve had drummers who won’t take off their front head, and refuse to cut a hole in the front head. I’ve had to work with that. They had gotten the tuning to sound amazing, or they were purists and didn’t want anything inside the drum. The biggest issue you have when you don’t have the mic in the drum is you’re going to get bleed – bleed from the cymbals, and from the other drums – which can be a real problem for the kick, because it’s driving the entire song, and a lot of times when you’re mixing you want to gate your kick and snare. Read more.