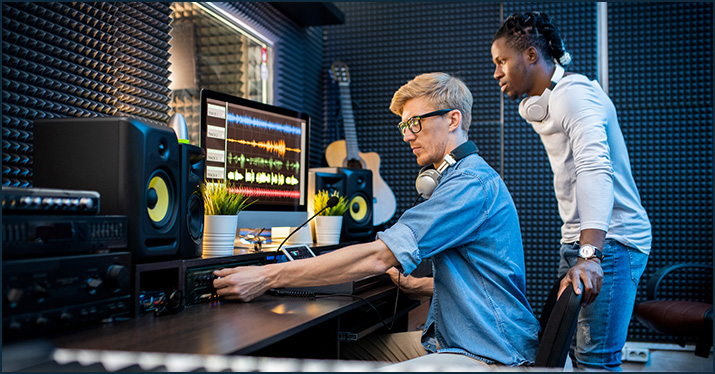 Using compressors and limiters when recording and mixing allows you to smooth out passages to better control a track.

For many recording musicians, the compressor presents an enigma. Most of us know that using compressors and their more specialized cousins, limiters, controls the dynamic range (aka volume) of an audio track or mix, but how do they work and how can you use them to their greatest advantage?

I’ll provide a brief overview and then head into the studio and see how the use of a compressor aids in the recording process.

Table of Contents:
• What is a limiter?
• What is a compressor?
• Compressor settings
• Practical application
• Finding the sweet spot
• Compressing acoustic piano
• Expanding the use of the compressor

While dynamic changes in volume help give music its shape and emotion, wild and sudden changes in volume can create challenges when recording and mixing your music. Using compressors and limiters allows you to smooth out passages where the volume may be too loud.

What is a limiter?

A limiter is a compressor, but a compressor is not necessarily a limiter. Limiters are designed to prevent the sound level of an audio program from going beyond a certain, pre-set point. They generally have very high compression ratios of 20:1 up to Infinity:1. (A compression ratio of 20:1 means that for every 20dB that the input signal increases beyond a preset point, the limiter will only allow output gain of 1 dB.)

Limiters are critical for in-ear monitoring systems, radio and TV broadcasting, and vinyl disc-cutting systems. Limiters are seldom needed in a typical home recording session. Compressors will normally use lower compression ratios — often in the 2:1, 4:1, or 8:1 range — meaning the amount of gain reduction applied is not as drastic as with a limiter.

What is a compressor?

Compressors, on the other hand, are frequently used tools that reduce or control the dynamic range of a recorded track. A good way to envision the dynamic range of a track is to chart the difference in volume between the loudest notes to the quietest notes of a recording. Compressors are handy for controlling many of the typical instruments you may be recording, such as bass guitar, vocals, acoustic guitars, and keyboards.

Not every track will benefit from compression. If the original performance has a fairly limited range from the loudest to softest note, using a compressor will make little or no difference. However, if we consider a lead vocal track where the singer starts near a whisper and is wailing over a pounding band by the song’s end, putting a compressor on that lead vocal track may help reduce the dynamic range so it rides atop the band and allows for an easier mixing process.

The controls on most compressors are fairly similar. The first and most crucial setting is the Threshold. This is the point at which the device will begin to reduce the level of the output signal.

Two other controls affect the sound of the compressor: these are the Attack and Release controls.

If the Release is set too fast, it may result in a sound often referred to as “pumping” or “breathing,” which draws attention to the compressed track. It’s up to you to decide whether or not such a sound may be useful in your overall concept for a song. Once again, spending a few minutes playing with these controls is the fastest way to hear how they work.

One other important benefit of using compressors is that, when set properly, the net effect is to increase the apparent overall level of a track, making it seem louder by compressing the loudest parts without creating any overload.

To bring a practical application to this concept, I worked with some local student musicians to record a demo using Pro Tools and then processing it with a plug-in compressor. We started by recording an electric guitar through a small amp with no EQ or dynamic processing.

We played back the track and inserted the Pro Tools Dynamics plug-in. Although we recorded without effects, some engineers prefer to record with a compressor engaged from the start. Others record without any compressors, preferring to make decisions about dynamics after the performance has been captured.

At my request, the guitarist played a soft picking pattern first and then shifted abruptly to a more aggressive (and louder) chordal texture. Without compression, the chordal texture dominated the demo guitar track.

To demonstrate the before-and-after effect of the compressor, we decided to over-compress the track, so that when you listen to the compressed version, you’ll be able to clearly hear the difference. For an actual session, this level of compression would likely be judged excessive unless you were going for an effect.

Note that over-compressing a track for an effect is a very creative tool. Listen to some of the Beatles recordings from Revolver or Sgt. Peppers to hear the heavily compressed sound of Ringo’s drum kit for an idea of how effective such a use can be.

After tweaking a bit, we settled on a threshold of -25 dB, so even the softer part of the guitar track was being compressed slightly. We used a ratio of 6.6:1, which gave us a fairly consistent overall final track, reducing the level of the chordal texture to a point where it was only slightly louder than the softer first section.

This particular plug-in offers a real-time analyzer (RTA) screen, similar in look to an old-school oscilloscope, allowing the user to see the point at which the signal is being compressed and by how much. A vertical orange line on the RTA screen represents the threshold point and an intersecting white line represents the compression ratio beyond the threshold point. So with this particular ratio of 6.6:1, the slope of the compressor looked similar to a human knee (which is why this type of setting is often referred to as “knee compression”).

After listening back to the extreme compression we used, we realized that, although we now had a more manageable dynamic range, if we wanted to use this track, we’d have to boost the level of the guitar.

How much compression you use is also determined, in part, by the complexity and number of tracks in your overall mix. The denser the mix, the less apparent the individual compressed track will be, as opposed to say, a solo guitar and vocal, where the compressor must be very carefully set to avoid distracting the listener.

Next, we made a stereo recording of an acoustic grand piano, again with a quiet and a loud section. For this compressor demo, we used a lower ratio of 3:1, but to show the compressor at work, kept a threshold point much lower than one might normally select for a piano, setting it at -24 dB. This way, the compressor would kick in a bit on the quieter passage and really be working hard on the louder section.

The overall dynamic range of the piano track was roughly 25 db, from a soft intro around -30 db up to some peaks in the louder section that hit -6 db.

On playback, we found that the overall dynamic range had been reduced by about a third, from 25 dB uncompressed to about 16 db, when compressed. As a result, the overall track sounded more consistent and the softer intro was more apparent. The net result was a track that would fit more consistently and would neither disappear in the quietest passage nor overpower the mix when the volume kicked up in the louder section.

Expanding the use of the compressor

As a general rule, it’s best to avoid heavy gain reduction on vocals, acoustic instruments, and percussion unless you are going for a specific effect. Conversely, electronic instruments such as bass, keyboard, synth, and electric guitar can handle a good bit of gain reduction and still sound like the actual instrument. As with so much in recording, it’s up to the ears of the recording engineer or musician to determine how much is the appropriate amount to use.

Start recording and get your compressor in the circuit to see how you can help smooth out your tracks to best effect.

Keith Hatschek is author of The Real Ambassadors: Dave and Iola Brubeck and Louis Armstrong Challenge Segregation, which tells the story of Louis Armstrong, Dave Brubeck, and Iola Brubeck as they took a stand against segregation by writing and performing a jazz musical titled The Real Ambassadors. Hatschek, who directed the music management program at University of the Pacific for twenty years, has authored numerous music industry books, including The Hitchhiker’s Guide to the New Music Industry, The Golden Moment: Recording Secrets from the Pros, and The Historical Dictionary of the American Music Industry.