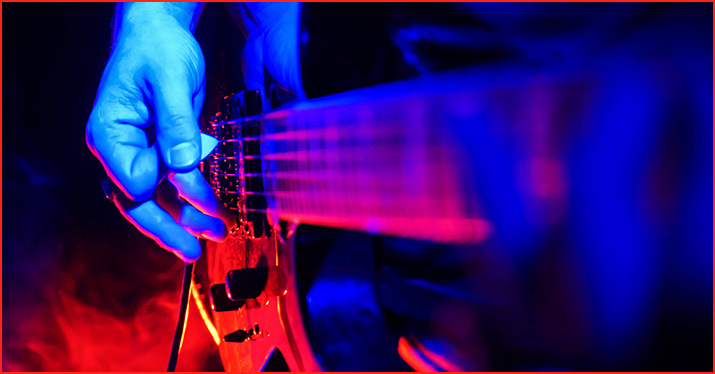 While major and minor chords get all the attention, don’t neglect music’s lovely diminished chords. They can spice up your boring chord progressions and add drama to your songs.

Although staples of jazz, blues, and classical music, diminished chords aren’t used very often in pop, rock, or country. That’s a shame, because diminished chords are incredibly versatile and can add just the right amount of tension to your songs to keep things interesting.

What is a diminished chord?

A diminished triad is the more-dissonant sibling of a minor chord. It is formed by stacking two minor thirds on top of each other. So where a C minor chord is spelled C-Eb-G, a C diminished chord contains the notes C-Eb-Gb. (In other words, take a minor chord and flatten the fifth note.) It is notated as Cdim or Cº.

How diminished chords are used

They are often used as passing chords, pulling the listener from one chord to another. For example, if you want to go from a C major chord to a D major chord, you use a C#dim chord to increase the tension between the two. Notice how the bass note walks up the chromatic scale:

Elton John’s “Benny and the Jets” provides a good example of this. You can hear, at 0:33 into the song, how that G#dim7 chord pulls you up to the Am.

G
the spotlight´s hitting something

G#dim7
that´s been known to change the weather

As we saw with augmented chords, diminished chords are symmetrical. In other words, Cº7, Ebº7, Gbº7, and Aº7 all use the same four notes:

That means there are really only three different groups of diminished seventh chords, with the second two groups spelled out below.

You can hear a good example of the symmetrical nature of diminished chords in “Michelle” by the Beatles, in which the guitar plays Abº7→Bº7→Dº7→Bº7 before finally resolving up to C major over the words “go together well,” at 0:14 in the video below.

Due to the symmetrical quality of diminished sevenths, and because these chords want to resolve to the chord one semitone above them, the same four notes can easily resolve to eight different chords:

You can vacillate between a major chord and its own diminished seventh. For example, C→Cº7→C. You can hear examples of this in Queen’s Bohemian Rhapsody in this section (3:07 in the video below)

Other uses for diminished chords

You can hear this passage at 0:51 in the video

The half-diminished chord is sometimes noted as ø7, but you are much more likely to see this chord labeled as m7b5 or even m7-5.

In fact, it’s probably more helpful to think of this chord as a zestier version of a minor seventh than as a diminished chord because of the way it’s used. The half-diminished doesn’t want to resolve up a semitone the way its fully diminished sibling does. Instead, it is most often used as a substitute for a ii chord in the classic ii-V-I progression. So you have ii7-5→V7→I (in the key of C: Dm7-5→G7→C).

A classic example of this is in Gloria Gaynor’s “I Will Survive,” which can be heard at 0:14 in the video.

Related Posts
Using augmented chords in your songs
Add drama with a flat-six chord
Use substitution chords to spice up your songs
What makes power chords so powerful?
The major mediant chord can add an unexpected surprise