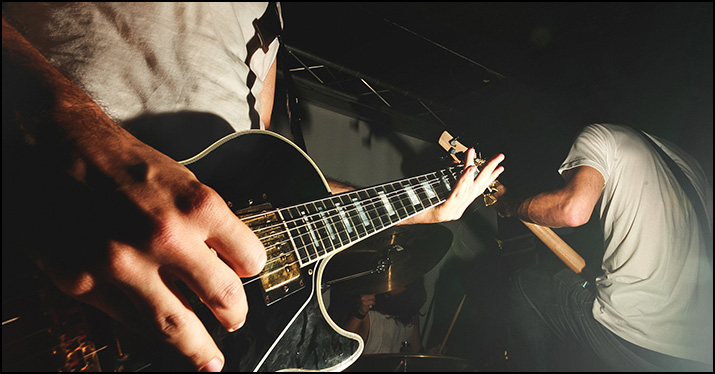 Band rehearsals generally serve one of three purposes — and chances are you’re squandering this valuable time.

One of the areas artists squander their time the most is during band practice. For many of us, band practices are fun hours with our bandmates, playing our songs over and over again and loving how great we sound. That’s how it used to be for my band.

But, thinking back on that time, I realize we were incredibly inefficient during our band practices. And I have a feeling that you might be, too. So, let’s talk about how to supercharge your band practices. Let’s start by asking what band practices are for? What are you hoping to accomplish?

The purpose of band rehearsal

A band practice has one of three purposes, and that purpose depends on where you are in your artistic creative cycle.

The first purpose of band rehearsal is writing new songs. If you’re an original band, you’ve got to write songs. Now, not everybody writes new songs collaboratively during band practice. You may write them by yourself and then bring them to practice. Or you may bring an outline or just a chorus and your bandmates will help you build the rest of the song. Or, at the very least, your fellow band members will contribute some ideas to the composition or arrangement that makes the song better. That gets done during rehearsal time.

The second purpose of rehearsal, and this is pretty obvious and what band practice is usually used for, is rehearsing your songs. This includes learning and optimizing your newly written or learned songs. Once your new songs are written you’ve got to get really good at playing them.

Now, there is frequently some overlap between sessions where you compose and the ones where you’re learning to play your songs. But if you approach this the right way, rehearsing the songs really is a separate practice session from composing. And you also need to rehearse your older songs to keep up your chops and your familiarity with them.

And then there is the third purpose of band practice: preparing for and optimizing your live performance. And I don’t mean just making sure you know the songs well enough to perform. And I also don’t mean running through your whole set list in the order you’re going to perform the songs. I mean really rehearsing your stage presence. Who stands where, who moves how. Like actors rehearsing a play.

What? You don’t rehearse your live performance? Well, you should.

There’s a legendary live performance coach named Tom Jackson. I’ve seen him on stage in-person. How he transforms a band from ho-hum to really engaging has totally changed the way I view a live performance. If you want to see some of his stuff — it’s great — go to YouTube and search “Tom Jackson getting audience attention.”

Jackson advises that before any concert, and especially before a large concert or a tour, you want to create a practice set-up that mimics your live set-up and practice your live show.

To do this right, you could spend one full rehearsal on just one song and, actually, the big artists spend days working on each song to make sure their stage presence is optimized. And then, eventually, when you have each song down pat, you’ll want to run through your whole set in practice.

But I want to be spontaneous!

Now, I can see you thinking, “That’s so corny, that’s so weird. I’m an artist. I’m creative. My stage performance needs to be spontaneous. I’m inspired by the crowd.” And you would be wrong.

Yes, music needs to be heard. But people come to your shows to not just hear your music, but to see it be performed. And if you don’t rehearse that like a play, then you risk leaving your audience underwhelmed.

Take this example. If you rely on the energy of the crowd to be inspired, and you’re playing to a half-empty room, and you’re bummed about that, the crowd will see that. You will not make your best impression. You may not gain any new fans or sell any CDs that night. And that would be a waste because, if you had a well-rehearsed live performance, you would give a consistent kick-ass performance night after night, and you might still gain new fans in that half-empty room and sell them some CDs and pick up a few bucks.

So how do you make your rehearsals the most effective use of your time? I discuss that in the video below.

Related Posts
11 tips for better band rehearsals
How to practice your instrument to get results
To improve as a musician, you’ve got to measure and track your progresst
Practice music like an Olympic athlete
Make the most of rehearsal time