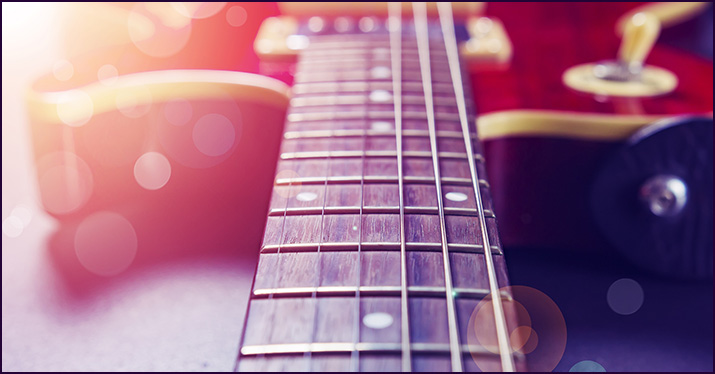 Many factors can cause your stringed instrument to have intonation problems, including old strings and fluctuations in weather and humidity. Maintain and protect your instrument to keep your guitar in tune.

Guitars use what is known as an equally tempered scale, as do pianos and most western musical instruments. Without going into the science, the guitar’s tempered scale is a compromise and doesn’t result in 100 percent precise tuning or intervals between notes. Since guitars have this inherent weakness when it comes to being in tune, it’s important to develop a basic understanding of guitar intonation and adjustments to get the best performance out of your instrument.

Most guitar players have a tuner of some sort, whether it’s a stomp box on the floor, a rack-mounted LED cascade, or a simple portable LED model — all of which can speed up tuning and accuracy. Tuners can be helpful in diagnosing and making basic intonation adjustments yourself. One of the most obvious signs that your instrument has intonation issues is if each string played open is in tune, but when you play a bar chord anywhere up the neck, it sounds out of tune.

Guitar intonation issues can be a result of:

The first thing on this list may be the most overlooked. If you can’t remember when you last changed the strings on your guitar or bass and are having trouble with intonation, stop now, get a new set of strings, and put them on before proceeding any further. In many cases, replacing your strings can solve your intonation problems — not to mention, it is impossible to properly set your intonation with worn strings.

Years ago, I spoke with Bill Stevens, a renowned guitar repair expert who adjusted and repaired guitars for decades in the Stockton, CA area. Here’s what he had to say about guitar intonation and maintenance.

“For a quick check to see how much intonation adjustment is needed,” said Stevens, “I like to use one of the guitar tuners that has a needle to register intonation and an LED that goes to green when the string is in tune. First, tune an open string so it’s in tune using the tuner, then go on up to the 12th fret and press down and play the octave of the open string. If it’s a bit flat, you can shorten the string length by moving the saddle toward the fretboard using the adjustment screw [on an electric guitar]. If the octave registers as sharp, then you’ll lengthen the string by using the adjusting screw to move the saddle in the opposite direction, away from the fretboard.

“Use the tuner to get the octave in tune with the open string. Carefully adjusting the saddle pieces in this way can help clear up some of the most typical intonation problems on your electric guitar. If you have an acoustic guitar, you won’t have individual saddle adjustments, however, many manufacturers are shipping new acoustics with compensating saddles which help improve intonation.”

“Weather can have a lot to do with how your guitar plays,” Stevens explained. “Try to avoid extreme temperatures when your guitar is in its case. Particularly leaving your guitar in a car in summer, as it can get incredibly hot. In winter, don’t leave your guitar out in the garage or anywhere where there might be extreme temperature or humidity swings. Although it sounds pretty basic, get a decent case to protect your instrument, too. Nearly every guitar sold used to come with a case of some sort, but today, many guitars don’t include a case to protect your investment. So I encourage everyone getting a guitar to at least get a soft bag. Also, don’t lay down your guitar when storing it, it’s better to keep it upright in the case.”

Mandolins and ukuleles are less likely to have intonation problems due to their smaller scale. Bass guitars, on the other hand, may need regular attention since the amount of tension on the neck is way more than a typical electric guitar.

Most modern guitars include a metal rod in the neck that helps stabilize the neck and reduce or eliminate neck bowing that plagued older guitars without them. According to Stevens, “Summer is a time when you may typically need a truss rod adjustment due to the heat causing a bit of neck bowing. It’s mostly the case with newer guitars where the wood is not quite cured. Then in winter, the neck may bow a bit in the other direction and you may need a little relief, moving the truss rod in the opposite direction than you did in the summer.”

Many older guitars won’t require regular truss rod adjustments, assuming they don’t experience any extreme conditions, since the wood is settled. Your instrument may also require a truss rod adjustment if you change to a different gauge of string and end up with action that is too high to play comfortably, or if you want to use a lowered tuning which might result in annoying fret buzz.

“Most new guitars need a truss rod adjustment once you start playing them,” Stevens added. “Although the guitar was probably set up to play properly at the factory, it has likely been in storage for a few months by the time it gets to you, so it will need a tweak.” Many music stores offer a free setup and adjustment on every guitar they sell. No matter where you are buying a guitar, you should ask that the store go over the intonation and set it up for you, ideally at purchase or within the first week.

Unlike adjusting the saddle pieces on your electric guitar, which can only affect string length, truss rod adjustment can have a major impact on your guitar’s playability. I always have an experienced guitar tech make any truss rod adjustments on my guitars. But I can check to see if I need an adjustment using two simple aids: a capo and a feeler gauge to measure the amount of neck relief.

Start by placing a capo at the first fret on your guitar neck. Then, hold down the string where the neck joins the body. Insert the feeler gauge between the string and the fret at the eighth fret. On a typical electric guitar, there should be between .3 mm and .5 mm clearance. This clearance is referred to as “neck relief.” Too much neck relief can cause the neck to have higher action in the middle of the neck, resulting in poor intonation (fretted notes will be sharp) and just being hard to play. Not enough neck relief can cause fret buzzing.

There is no single measurement for how much relief should be used. Just like anything else with an instrument like a guitar, a player’s preference is part of the equation. Some of that depends on the style of the instrument and the player. Should you want to go ahead and dive into making your own truss rod adjustments, this video is an excellent overview of the process.

As a guitarist, I’ve played and owned many guitars over the years and I’m happy to say the guitars I have now all have very good intonation and are quite stable. Others that I’ve owned over the years were more temperamental or fluctuated greatly with changes in weather, requiring seasonal adjustments. And while I’m comfortable checking my neck’s relief or adjusting intonation via the saddle pieces, I get a pro to do my truss rod tweaks, when needed.

Hopefully, this article has helped you learn a little more about guitar tuning and intonation and you’ll have a better idea of what it takes to make your guitar more playable and in tune, especially if you’ll be using it for recording.

Keith Hatschek is author of The Real Ambassadors: Dave and Iola Brubeck and Louis Armstrong Challenge Segregation, which tells the story of Louis Armstrong, Dave Brubeck, and Iola Brubeck as they took a stand against segregation by writing and performing a jazz musical titled The Real Ambassadors. Hatschek, who directed the music management program at University of the Pacific for twenty years, has authored numerous music industry books, including The Hitchhiker’s Guide to the New Music Industry, The Golden Moment: Recording Secrets from the Pros, and The Historical Dictionary of the American Music Industry.

Related Posts
Microtones: the notes between the notes
Seven causes — and remedies — of guitar fret buzz
Recording acoustic guitar: Experiment with mic placement
The Flying V: The history of an iconic guitar
Why you can’t tune a guitar – and how to fix it