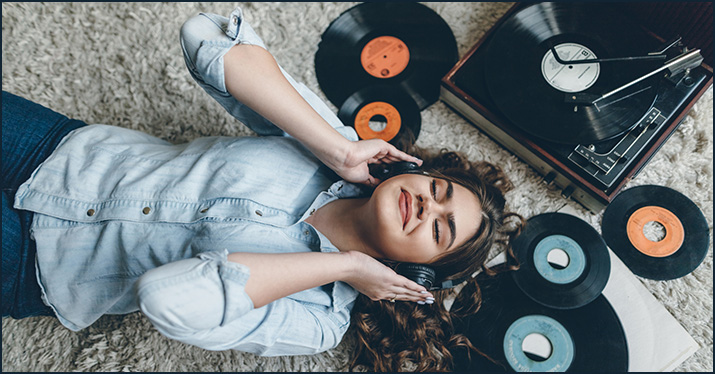 Actively discovering new music not only helps broaden your musical landscape, it can help you learn something about your friends and bandmates — and yourself.

As a lifetime musician (okay, drummer), I’ve always thought I had a pretty inclusive taste in music and that I was a well-traveled music appreciator. Truth is, I have my go-to artists and genres, and lately, I was finding myself in a bit of a musical rut.

I’ve got a sizeable CD collection (all of it is on my Apple Music app, as well), and now with Spotify and streaming and YouTube, the entire catalog of musical recordings throughout history is practically at my fingertips — but the sheer volume of material is almost paralyzing. Where do you start?

Yes, I know, playlists exist. But I’m also an “album” guy. Dabbling here and there with singles and “if you like this you should like this” recommendations doesn’t do it for me. So, I was in search of some curated album recommendations from people I trust.

I’m currently playing in a couple of cover bands — one is a four-piece acoustic outfit that’s been active for a few years now. Most of my musical endeavors to this point had been original bands, so this has been a fun change of perspective. In addition to loads of music I already love, I’m playing music by artists I’d never listened to, and learning and singing songs (I’m a vocalist, too) is one way to really dig into new artists and styles and has challenged me and broadened my musical appetite.

So I turned to my bandmates in Piper Down. I asked each to share five albums that were pivotal to their musical development. Five landmark albums that made a difference to them in their musical evolutions. I specifically did not ask for their “five favorite” albums, because I think that’s horseshit. I could make a list of five favorites each week and they’d likely not be the same from week to week.

But five albums that, at the time I discovered them, spoke to me in some profound way and helped set my musical course is more of a constant. Even that list had to be pared down — there were many more than five I could list — so that alone was an intriguing exercise.

It was very interesting to get my bandmates’ selections, and it revealed a few things about them as musicians and music lovers. I discovered artists I had never listened to — Spock’s Beard and Tristan Prettyman among them — listened to a few that I hadn’t spun in years, and confirmed I do not like the Counting Crows.

It was enlightening and entertaining: I listened to some new music and I learned a little about my friends and bandmates in the process. I recommend you do something similar with your band.

More recently, my wife launched a user group based on the 2010 book, 1001 Albums You Must Hear Before You Die. Now, of course, just like the Rock and Roll Hall of Fame and the Grammys and any “body of experts” who try to compile the greatest albums or artists or whatever — the list is inherently flawed. Albums and artists are included on the 1001 Albums list that leave me scratching my head, and others that seem obvious are missing. So, there’s that caveat.

But, the endeavor we’ve embarked on includes a website called the “1001 Albums Generator.” The idea is, you create a listening group, invite friends, and every day, the site randomly serves up an album from the 1001 Album list that you listen to, rate (5-star scale), and review, if you choose to.

We’ve got four active participants (reviewing daily) and a few others who float in and post something once in a while. We’re trying to grow the group, but this is actually a good size. The four of us are texting and communicating more frequently than ever as a result, we’re all totally engaged and curious as to what the others are going to say about the day’s album, and it’s equally fun to find that you agree or wildly disagree on a particular album. Especially for the material I don’t enjoy, it’s been educational to read, in real-time, what someone who loved the album took away from the experience.

At the end of the day (literally), I’m discovering music and artists I’ve never heard of before. And perhaps even more interesting, I’m reevaluating artists I thought I didn’t like and having to admit that maybe I was wrong. Morrissey is one stand-out. I remember being adamantly disposed to hating him as a vocalist. My college self was not a fan.

We’ve since listened to two albums featuring Morrissey — one by the Smiths and another solo effort — and I had a completely new perspective on his music. I’m not about to go out and purchase his catalog, and I wouldn’t want to be cornered by him at a party, but I enjoyed both albums and it was nice to learn that I am capable of reevaluating and getting past my preconceptions about music. And admitting it to the group has been part of the joy of the process.

Not to read too far into this, but I believe this translates to a larger life lesson. I am going into each listening session with a reset — even for albums I love — trying to go in with fresh ears and no preconceptions. And I’m attempting to apply this attitude to my everyday life. Whether I’m successful at every turn is questionable, but this exploration of new music, in this context, has become part of my daily experience, and it’s reminding me that giving unfamiliar things a chance and not going into situations thinking I already have an answer can yield unexpected and positive results.

So I encourage you to go out, explore, and actively discover new music. You’ll thank yourself for doing it.

Related Posts
What was the first CD ever released?
Happy 40th Anniversary to the CD!
Are online vocal lessons right for you?
How to get your music heard and seen
The functional relationship between math and music