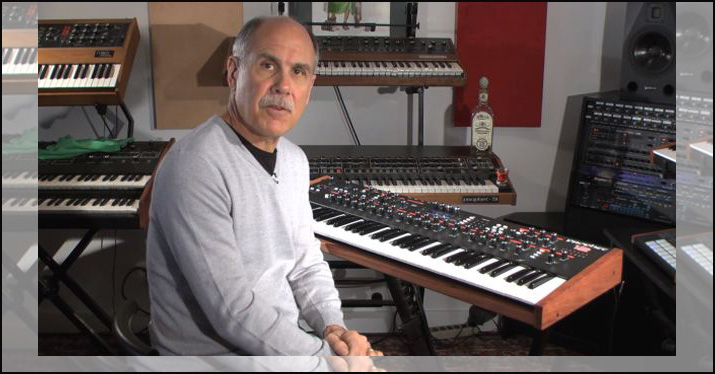 Music technologist, inventor, and synthesizer creator Dave Smith died on May 31, 2022. His innovations will continue to shape music for years to come.

You may not know the name Dave Smith, but you’ve certainly heard echoes of his work. It’s safe to say that rock, pop, electronic music, hip hop, R&B, and so many other current genres would not exist as we know them without his contributions.

Dave was a genial genius who developed the Prophet family of synthesizers in the late 1970s; they were the first fully-programmable synths that allowed keyboardists to play multiple notes at the same time. The groundbreaking Prophet-5 was used on Michael Jackson’s Thriller, Madonna’s Like a Virgin, Peter Gabriel’s So, soundtracks for films including The Terminator and Blade Runner, and so many other iconic projects.

Perhaps even more importantly, Dave worked with fellow music technology engineer Ikutaro Kakehashi to launch Musical Instrument Digital Interface (MIDI) — which, if you’re not familiar, is the bedrock digital protocol that allows electronic instruments and software programs to communicate with each other in smooth and powerful ways.

It’s hard to overstate how profoundly MIDI shapes the creation of popular music. Every radio smash that uses sounds from virtual instruments, any tracks programmed via Apple Logic or Ableton Live, the biggest dance floor mega-hits sequenced for propulsive impact — all are fundamentally built on the technology Smith helped to create.

Mario J McNulty is a Grammy Award-winning producer and engineer who was worked with the likes of David Bowie and Lou Reed. Here’s what he had to say about Dave’s impact on decades of popular music:

Dave Smith’s contributions, in more than one singular way, completely altered the sound of records, and his impact continues to this day. I can’t even imagine what life would be like without that Prophet sound in the most legendary music ever. Dave’s work with MIDI changed music production forever. He was a genius.

New York producer and engineer Josh Giunta, who recently won a Grammy Award for his work with Taylor Eigsti, also affirmed the impact of Dave’s innovations:

MIDI is so pivotal and pervasive throughout modern production that many of us have a hard time imagining music making without it. MIDI was such a fork in the road. Its foundation has allowed castles to be built on top of it.

Dave was a pillar of the music technology community, and a mainstay at National Association of Music Merchants conventions, where I first had the privilege of meeting him. Even when I was just beginning my career as a young Keyboard magazine writer, I remember him showing me the same warmth, kindness, and respect he shared with industry veterans he’d known for decades.

My former Keyboard magazine Editor in Chief, Ernie Rideout, shared a rich history with Dave, and remembered him as follows:

Dave Smith was as much a part of the early days of Keyboard magazine as Chick Corea, Herbie Hancock, and Keith Emerson. He brought the model 800 sequencer, one of the first products he ever made, to show founding editors Tom Darter and Dominic Milano. Subsequently, Tom and Dominic each bought a Prophet-5 when Dave introduced that legendary synthesizer in 1978. Nearly every artist I ever interviewed for Keyboard seemed to have a Sequential Circuits instrument in their rig.

When Dave made plans to make hardware synths again in 2002, he approached me to ask if we’d be interested in covering his new instruments. Though I had the privilege of hanging out with Dave many times prior to that — I was always in awe of his intellect, but just as impressed with his warmth, humor, and humanity — I was humbled, floored, and excited all at the same time. Here was one of the most prolific inventors in music, whose products made the world of modern music production possible, and he wanted to talk to me.

Without Dave’s many contributions to music, it’s doubtful that there would have even been a Keyboard magazine editorial team for me to join.

The next time you sequence a drum groove, play a software synth, listen to music with electronic production, or hear the Prophet’s unmissable sound, take a moment to remember Dave and the creative gifts he brought to all of us. To learn more about his legacy, visit www.sequential.com/about.

One thought on “Dave Smith: The Godfather of MIDI”