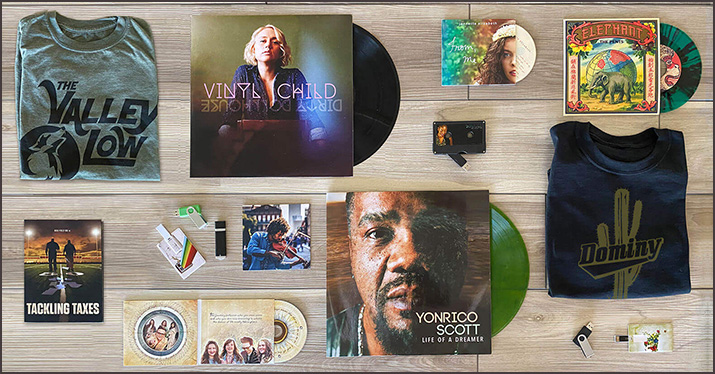 There are many steps to successfully releasing and selling your music, and getting your product prepared and your distribution channels aligned are critical elements of your plan.

Before you release a full album or a new single, you need to take some time to ask yourself important questions and make a plan to give your release the best opportunity to be heard by the most people. In part three of our four-part series, Carter Fox — Disc Makers’ social media marketing manager, touring bassist, and solo artist who recently hit the 1.5 million stream milestone for his single, “Eclipse” — focuses on how to prepare all your music files and promotional assets to have a successful release.

In the first two installments of this series, we covered what I call the Planning Phase, during which you’ve finished recording your music, finalized your creative assets, and determined an ideal schedule for your next release. In the Preparation Phase — your focus should be on preparing all the various elements you’ll need to have a successful release. This phase is made up of two components:

It’s time to get all your physical products in hand so you can sell and distribute them according to your plan. This encompasses choices you made in the planning phase when creating your audio master and artwork. At this point, you’ve already decided which products you will need to support your release and created a release schedule. This schedule includes dates when you need to have all your products in hand to align with your desired release dates for your singles, videos, album, and showcases.

Make sure you order your products with plenty of time to send out any pre-orders, for advance radio promotion, and to have for sale at your release show. Build in plenty of advanced time to account for any unforeseen delays or snags that come up. I’ve been to CD release concerts where the actual CDs were not available and the band was taking orders to send them out when they arrived. Not ideal.

This takes coordinated planning and execution, especially if you are getting t-shirts, CDs, vinyl, posters, stickers, and more from multiple vendors. You do not want a shipping delay or printing error to cause your items to show up after your release shows or promised delivery date. If you bake enough time into the process, even in the rare occurrence where there might be a defect with your product, you’ll have time to have it corrected without delaying your overall schedule or having to spend more in additional shipping or refunds.

Here are some general timeframes for different physical products to reinforce the need for coordination and planning when procuring your products. Via Disc Makers, CDs can take one to four weeks to manufacture and ship, USBs also take one to four weeks, and vinyl can take 26 weeks (6 months plus), which means you will have to really plan your vinyl release way ahead of time.

According to Merchly’s website, custom printed t-shirts can take two to four weeks to print and ship, and according to National Audio Company, cassettes can take at least five weeks after submitting all required elements. Though there are expedited manufacturing and shipping options available from most companies, this could result increased costs to you and increased chances for something to go wrong without time to correct it.

With your products in hand, you can prepare pictures and images for your website and social stores like Bandcamp and Instagram, make pricing decisions for your items, and begin to build the merch table of your dreams in anticipation of the release of your new project as you get ready to set up your distribution, using your release schedule as a guide.

Getting your music distributed

Now that you have your physical products either in hand or in the process of being manufactured, you can move on to the second component of this phase: setting up distribution.

Choosing your distributor will be based on a variety of factors. For example, if you’re looking to distribute your music both digitally to digital streaming platforms — Spotify, Apple Music, Amazon Music, Deezer, Tidal, etc. — and physically to retail and music stores, using a distributor like CD Baby may be most beneficial. If you plan on releasing multiple singles digitally, utilizing Amuse, TuneCore, or Distrokid’s yearly subscription fees for unlimited releases may be more appropriate.

You could also consider the distributor’s ties to larger entities and what that may mean for your release. The Orchard’s connection to parent company Sony could help with additional artist marketing services, or distributing through Songtradr, one of the biggest independent synch licensing platforms out there, might be the way to go.

Put your release schedule to work

Once you’ve decided on the best distribution option for you, you will want to begin the process of setting up the distribution for your singles and full album. Utilize your release schedule once again to ensure you upload your music with enough time to appear in stores when you want it to be released and to submit to certain digital streaming platform’s editorials playlists.

On Spotify, you will need at least one week before the release date — though it’s recommended to give yourself three to four — to submit to their editorial playlists and be included on algorithmic playlists such as Release Radar. On Amazon Music, you have up to two weeks after the release of your music to submit to their editorial playlists. Apple Music and others have editorial and algorithmic playlists, but songs are chosen based on pre-save data, current streaming data, and by personal selection from curators.

When preparing to release singles from an upcoming EP or album, you can upload each single in time for its release in accordance with your release — you don’t have to upload every song from your project at once if you plan to promote them individually prior to the release of your entire project. Bear in mind, depending on which distributor you choose, this could affect your cost to release if you have to pay per release. Conversely, when an EP or full album is released, you can submit one “single” from that project to submit to editorial and algorithmic playlists as part of that release.

In an effort to boost your album’s streaming numbers, when you go to set up distribution for the full album/EP, make sure to use the same ISRC codes (International Standard Recording Code) as the previously released singles in order to match the streaming data already accumulated from your previous releases.

This is how an album can be released with 100,000 streams on the first day. If the first singles have accumulated thousands of streams each, and they are connected to your album via ISRC, the numbers apply to the release of the album. Most distributors will have instructions on how to do this for their platform and can always be reached out to for assistance if the need arises.

Once you’ve submitted your music to your distributor, check your “Spotify for Artists” profile and any other early access channels to ensure your music has been received by and loaded to the digital streaming platforms. As mentioned, you will be able to submit to editorial and algorithmic playlists on Spotify at this time. (I recommend you do!)

Once you have confirmed that digital streaming platforms have received and approved your music and your physical distributor has the product it needs from you, you will be able to start the next phase — the Promotion Phase — with well-timed and well-targeted pre-save and pre-sale campaigns. Stay tuned for part four of the series.

Carter Fox is a bassist, entrepreneur, and astronomical enthusiast whose spent the past 15 years as a performer, producer, and digital marketing strategist for numerous artists and businesses across the world. In addition to being an accomplished musician, Carter is also the social media marketing manager for Disc Makers. You can find his music on Spotify, Apple Music, Bandcamp, and his official website.

Related Posts
Why does my music need mastering?
My overnight success was 15 years in the making
How to sell 1,000 CDs in ten weeks
Is your music marketing working?
A release strategy to fill your yearly calendar