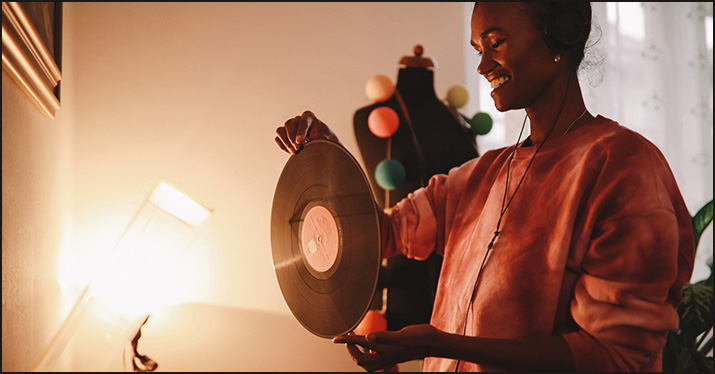 It may be hard for skeptics to believe, but physical albums were up a robust 37.5 percent compared to this time last year, from almost 28 million units to over 38 million units.

Twice a year, the good folks at MRC Data, which owns Billboard Magazine, publish a report on how the record industry is doing. And it’s well-known by now that the music industry at large has been growing at double-digit rates for at least the past five years due to the rapid growth of streaming adoption.

Today, I want to talk about what they are saying specifically about how physical media is doing and how albums are doing for the first six months of 2021.

Why do I want to talk about physical and albums? Well, for one, I run a physical media manufacturing company, so it is a topic near and dear to my heart. But, more importantly, we know that for monetizing our music, physical media remains one of the best ways to go, in addition to concert tickets and merch sales. And for physical media to sell, you need to put out albums.

For independent artists, if album and physical media sales do well, you have the best opportunity to monetize your music. So how is physical media doing for the first six months of the year? 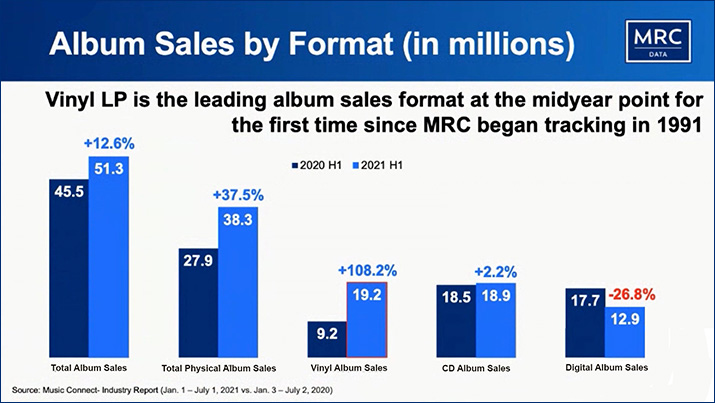 Well, it may be hard for skeptics to believe, but vinyl album sales are up 108 percent, from 9 million to over 19 million units in just the first six months of this year. I mean, talk about staying power! This is a 60-year-old technology. And to be honest, I was one of the skeptics about vinyl. I did not think it was going to sustain this level of growth for this long — but I am a believer. 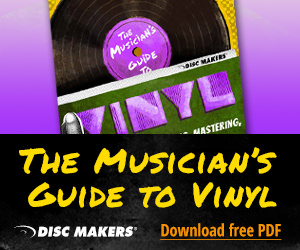 CD sales, after two decades of straight declines, are actually up for the first time. Now, that’s a modest two percent, but nonetheless up from 18.5 to 18.9 million units for the first six months of the year.

Digital albums, which basically means downloads, are down 27 percent — by about five million units. That’s not exactly surprising, with digital consumption switching from downloads to streams.

The data is in: Physical music sales are growing

For me, this is super exciting news. Physical music media sales are alive and every physical format has grown. Even cassettes, which are too small for MRC to report on, are up. Maybe most encouraging is that the album is alive and growing, which means lots of artists are thinking beyond just a quick single to a long-playing format that allows them to showcase a range of their works. It’s also good news for artists relying on physical media to pay some of their bills.

Now, a couple of other interesting tidbits from MRC’s data: Independent record stores accounted for 48% of all vinyl sales by mid-year, with a big chunk of that driven by Record Store Day. And perhaps just as interesting, independent artists make up 36 percent of the physical market overall and a whopping 50 percent of the vinyl market.

When we thought that vinyl sales couldn’t possibly keep growing at the pace they had been, while putting more strain on the really limited pressing capacity in the market, it doubled down by literally doubling in volume.

Meanwhile, CDs appear to be starting a growth phase again after 20 years. And we’re certainly seeing that at Disc Makers. With the long manufacturing turn times for vinyl, CD demand is starting to increase.

Now all we need to do is get this damn COVID Delta Variant under control so that we can start going to concerts like we did just a couple of years ago without worry.

If you’re ready to get started on your next vinyl album or CD album, check us out at discmakers.com or give us a ring weekdays at 800-468-9353. We’re here and we’re ready when you are!

Related Posts
The art and science of vinyl records
The vinyl manufacturing process at work (watch the video!)
9 groovy facts about vinyl records
How to maximize music income from songwriting and recording
Your #1 job as a music artist? Create demand for your music.