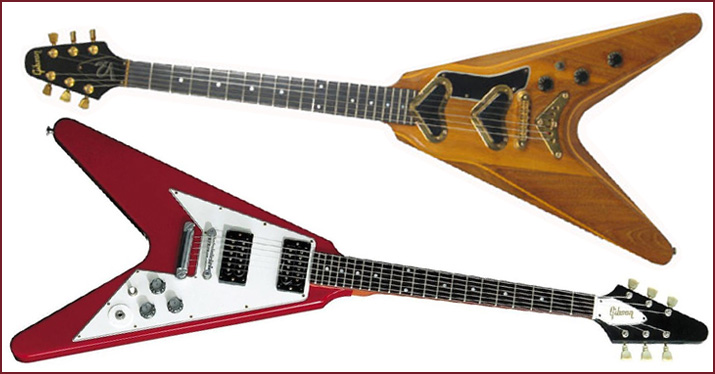 Since the first production electric guitar rolled out of its plant in 1936, Gibson has crafted some of the industry’s most iconic guitars — from the Les Paul and SG to the Memphis blues classic. But the lore and design of the Flying V and its modernistic siblings hold a special place in the Gibson catalog.

The Modernistic trio of the Flying V, Moderne, and Explorer were introduced in 1957, bringing futuristic design elements to the Gibson electric guitar line. Borrowing ideas from other modern designs of the era, such as the fins on the late ’50s Cadillacs and Chryslers, Gibson’s chief designer and president, Ted McCarty, replaced curves and soft lines with angles and edges to create some of the more exotic production guitars of his day. 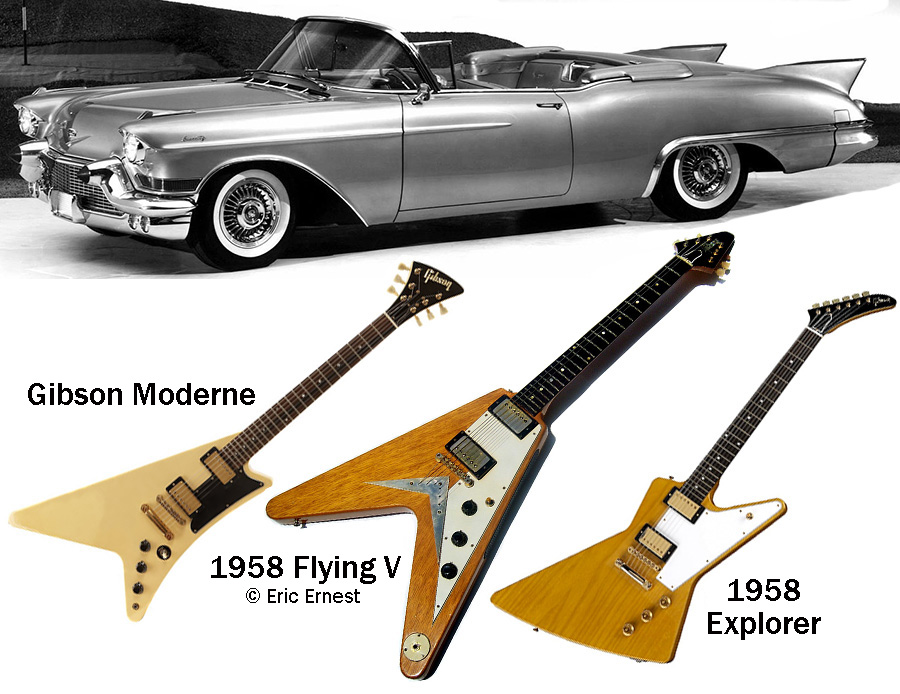 According to Gibson.com, the prototype Flying Vs were made of mahogany, had the V’s sides with a rounded rear (like a Les Paul), and were just too heavy. So the wood was changed to Korina (or Limba), and the bottom was cut out to the “V” shape. One designer reportedly commented that the guitar looked “like a flying V,” and the guitar found its name. 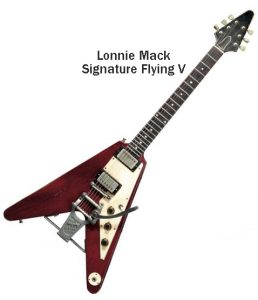 The Flying V first appeared in the 1958 Gibson catalog, listing for $247.50 (the same price as a Les Paul Standard), and blues-rock guitarist Lonnie Mack started using one immediately. Mack, who is of native American descent, was hooked on the arrow-like design of the guitar from renderings he saw before the guitar was even manufactured. His was the seventh guitar off the production line, which he had specially fitted with a Bigsby vibrato tailpiece by Cincinnati’s Glenn Hughes Music store. As a side note, it is Mack’s use of the Bigsby on his album The Wham of That Memphis Man and the signature track, “Wham,” that gave the “whammy bar” its nickname. 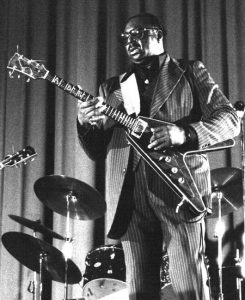 Blues guitar legend Albert King was another early adopter, whose first V – and all subsequent Vs – was named “Lucy.” A left-handed player, King’s style of playing the guitar upside down and with a minor tuning was quite unique (luthier Dan Erlewine later made a left-handed guitar for King). Also unique about his story is that, through a series of events kicked off by King losing his guitars gambling, actor and guitar collector Steven Seagal now owns all three of King’s Flying Vs. The sheer rarity of the guitars – Gibson built 81 in 1957 and 17 in 1958 – has the original Korina Flying Vs ranked among the most valuable guitars on Earth, worth $200,000-250,000 apiece. Photo: Lioneldecoster, CC BY-SA 3.0, via Wikimedia Commons.

The next generation of the Flying V

Gibson stopped production on the Flying Vs after 1958, then reissued the guitar in 1967 with some notable changes. A new mahogany body featured a larger pick guard and a stopbar tailpiece — the original design had the strings inserted through the back of the guitar. The 1967 model is now the standard, though Gibson does reissue the original model periodically.

In 1978, the Flying V2 was released, designed to be a companion of the new E2 Explorer. While preserving the defining V shape, the V2 incorporated a new concept, featuring a five-layer “sandwich” of alternating maple and walnut woods and a new sculpted body. Unlike the two humbucker pickups found in the earlier models, the original V2s featured two “boomerang” humbuckers that were designed to sound like single-coil pickups. Other changes included moving the knobs off the pick guard, using gold tuners, and adding a brass “V” shaped tailpiece. 20 years after the original debuted for $250, the V2 retailed at $1,199 (with a case). 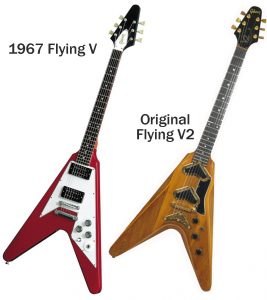 Sales didn’t meet expectations, and subsequent V2 models featured a number of alterations, including a switch to the dirty finger humbuckers. The new V2s also offered color finishes — pearl white, blue sparkle, candy apple red, sunburst, goldburst, silverburst, and black. The originals were available only in natural finishes, with either the maple or walnut layer on top. Once Gibson sold through its inventory, the V2 was discontinued in 1982. 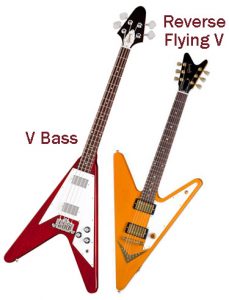 Gibson produced 375 four-string V basses in 1981 (in black, alpine white, silverburst, and transparent blue) and reissued them in 2011 – though they were discontinued in 2012.

In 2007, in week 29 of Gibson’s “Guitar of the Week” promotion, a limited run of 400 Reverse Flying Vs were produced, with a Mahogany body and neck, rosewood fret board, and Classic pickups. The success of the release prompted Gibson to produce a second limited run – 300 each of natural, classic white, and ebony black. A few changes were made to the re-issue, including an ebony fretboard and gold truss cover.

Guitar icons and the Flying V

While Flying Vs were first adopted by blues players like Lonnie Mack and Albert King, there are so many iconic guitarists who have made their mark on music history using a Flying V. Untold numbers have dabbled with this legendary guitar model, and there are a host of non-Gibson Flying V users too.

The Kinks’ Dave Davies acquired a Flying V in the mid-’60s. As the story goes, Davies’ custom-built Guild guitar was lost in transit on The Kinks’ first American tour in the mid-’60s, and he had to find a replacement for his only guitar quick. He couldn’t find anything he liked in the music store in town, until he reportedly found a Flying V in a dusty old guitar case in the back of the store, which he bought for $60 (or $200, depending on who is telling the story). The guitar sold for over $33,000 in 1995, and was auctioned again in 2019.

Jimi Hendrix owned at least three Gibson Flying Vs. Two were right-handed – a 1969 tobacco sunburst and a black 1967 model that Jimi himself painted to become his so-called “Psychedelic V.” The third was a left-hander, built for Jimi by Gibson in 1969 and first used live in 1970. The psychedelic paint job on the Psychedelic V was done by Hendrix, but was apparently stripped off the guitar by an Irish guitarist named Mick Cox of Eire Apparent after Hendrix had gifted him the guitar. A UK musician named Dave Brewis eventually came to own it, and in 1999 he restored the guitar to it psychedelic state. That, combined with photos of its time with Hendrix, was what Gibson’s Custom Shop used for its limited-run reissue in 2006.

From an interview with Metallica’s Kirk Hammett about his signature Kirk Hammett Flying V: “Gibson noticed that on the first three or four albums, I played a Gibson Flying V. So, they approached me and asked if wanted to do a signature Kurt Hammett Flying V model based on the Flying V that I played during my first 10 years in Metallica. For me, there are only a few guitar makers that have really been able to hold my attention for long periods of time… So, if any of those guys ask me to do anything, I’m going to say ‘yes,’ because they’ve had such a profound influence on me and have helped with my own playing over the years. In other words, when Gibson comes calling, I come running.”

Lenny Kravitz is known for his love of old-school gear. “I use an assortment of Les Pauls in the studio,” said Kravitz in an interview on the Gibson website. “A Goldtop, a couple of vintage Flame tops: ’58, ’59 and ’60s models.” Kravitz also plays a variety of Gibson ES-335s … But he is most closely associated with the Gibson Flying V, and got his own Gibson Flying V signature in 2002 (a very limited edition of only 125). The Kravitz is essentially a 1967 historic reissue with a black and gold flake finish and the pick guard and truss rod cover in gold mirror.

Rudolf Schenker founded Scorpions in 1965, appearing on every album and at every tour. Schenker is known for playing Gibson Flying Vs – he owns over 60, including a few of his own ’84 Rudolf Schenker Signatures, a custom double-neck V, and an acoustic Flying V made especially for him by custom-guitar maker Boris Dommenget. (Schenker now uses Dean V models). Schenker would have one more, were it not for his younger brother Michael who permanently “borrowed” one of his ’71 Flying V Medallions.

Michael Schenker started with Scorpions before joining UFO and then starting The Michael Schenker Group. Schenker’s main guitar for much of his career was a Gibson Flying V, which he typically played through a wah-wah pedal (used as a parametric equalizer to boost the midrange tone. Schenker was the inspiration for Metallica’s early twin-Flying V sound (though James Hetfield’s white “V” was not a Gibson).

Forming half of Judas Priest’s twin guitar attack, founding member KK Downing’s trademark guitars were Gibsons, starting with an SG Junior (his first professional instrument) but eventually landing on the model he would be most closely associated with for the rest of his career: the Gibson Flying V.

7 thoughts on “The Flying V: The history of an iconic guitar”