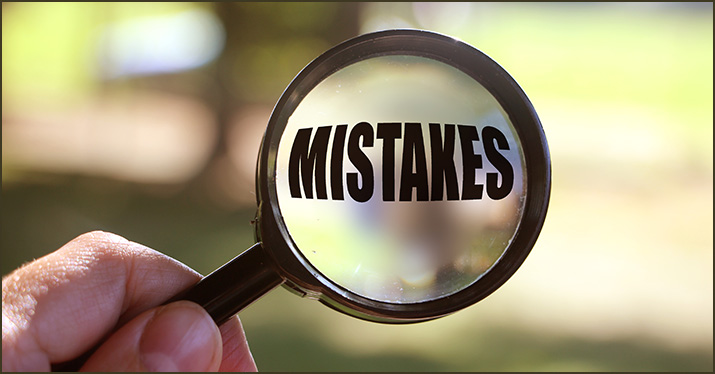 In these videos, I break down the 10 things I see independent artists do — or fail to do — that leads to underachieving in their music careers. Here are the top 10 marketing mistakes independent musicians make.

Do you remember back in the day when David Letterman would do his top 10 lists? No? I know… I’m old. They were funny. Do an online search and you’ll see for yourself. Well, I’m going to start this year off with a “Top 10” list of my own. Unfortunately, it won’t be funny, because I’ll be addressing the top 10 marketing mistakes I see independent music artists make. You see, after talent, which you need, and a willingness to work hard, which is essential, the ability to do effective marketing is probably the single biggest driver of music success.

I’ve seen a ton of albums get released during my 30-plus years at Disc Makers. And of the hundreds of thousands of albums released by independent artists over the decades, only about one in seven is re-ordered. That is a success rate of about 15 percent. So my goal is not just to get that success rate up — I want to help you be a more successful music artist overall. So without further ado, here is my list of “Top 10 Marketing Mistakes Independent Artists Make.”

Music is not just an audio format — it’s highly visual as well. Think of any famous artist and you’ll probably picture their look simultaneously with — or even before — their sound. YouTube and TikTok are two of the world’s biggest music discovery platforms, and they’re both all about video. That’s why video is essential to building your artist brand. Video does not need to be expensive. You’re an artist, get creative. You must know a talented kid going to art school or somebody who’s an aspiring videographer who would love to make a cool music video even if it’s just for their own portfolio.

We’ve all been there: we follow a new artist on social media or their email list and we start getting inundated with messages to buy their product over and over again. That, frankly, is a great way to get fans to unsubscribe or unfollow you. You want your fans to engage with the content you create. Instead of banging them over the head with messages meant to sell, think of yourself as a storyteller. Tell interesting, authentic stories and illustrate them with beautiful, compelling photo and video content.

#8. Not giving fans something to get excited about

If you want to make a living in the music industry, you can’t rely on simply streaming your music — you have to sell something. However, in this streaming era, fans don’t have to buy anything when they want to listen to your music. So, you have to go for a mindset change and get them to want to buy. And you do that by creating special content and special packages. You know, deluxe packaging, a super cool vinyl album, an autographed CD, a limited-run pressing, a physical-only release that you don’t put on the streaming sites. Make your music special so fans want to give you their money and feel good about it.

#7. Dropping an album out of the blue

Your music release strategy is part of your marketing strategy. If you drop an album without dropping two or three singles first, you are increasing the chances that your album will fail. An album needs to be set up with a few digital singles to get your fans excited. Start six or eight weeks before your album release. Hype a single through social media and emails. Then, three weeks later, drop single number two with more promotion. It’s a way to get fans excited. With a creative singles release strategy, your fans will be primed and ready for the digital and physical versions of your album when you release it.

#6. Ignoring email as a marketing channel

Yes, we live in a social media world, but every artist I know who has an active email list tells me email is their top channel for driving sales of their physical media, merch, and concert tickets. Generally, people don’t go to social media to pull out their wallets. Artists love to brag about their huge social followings, but I have a saying: “Social for show, email for dough.” In this age of social media, email is one of the few assets you truly own and control.

#5. Not having a conversion plan.

Many artists focus their marketing on getting onto playlists, getting streams, or getting YouTube views, but those streams and views are purely transactional. They don’t necessarily build fans unless you figure out how to convert those listeners. How do you get a Spotify listener who found you on a playlist to follow you as an artist on Spotify? How do you get them to follow you on your social platforms? How do you turn someone who views your video on YouTube into a YouTube subscriber so you can start monetizing your channel? How do you capture an Instagram follower’s email address? You need to put some thought into how you can build a conversion process to turn casual streamers into life-long fans. There are tools available, like show.co, that can help you get started.

#4. Not having a call to action

It’s simple: if you want people to do something, you have to tell them what to do. If you want someone to stream your album on Spotify, tell them. If you’re on stage and you want your fans to go to the merch table and buy your t-shirt, tell them. It’s as simple as “Click here to buy my CD!” in an email. Whether it’s in your emails, your online ads, or on stage, you need to tell fans what to do. If you don’t, you’ll be leaving money on the table.

#3. Thinking you don’t have to sell

Too many artists think being a musician is just about making music and rehearsing and recording and getting streams. In today’s environment, it’s all about streams and YouTube views and TikTok views and it’s almost like you don’t have to sell anything. But, if you want to have a long music career, you need to be able to pay the bills from your music revenue and that is very difficult to do off streams and TikTok views. You need to have products to sell — t-shirts, CDs, vinyl, concert tickets — and you need to get comfortable asking people to buy them.

#2. Not budgeting enough for marketing and promotion

I get it, you’re an emerging artist, you’re not made of money. But to grow your popularity, you have to be prepared to invest. Let’s face it, in the early years of your career, you won’t make a profit off your music. Not only will you invest in equipment, in a van, in recording, but you need to be prepared to pay for marketing to acquire fans. When Ford launches its next F-150 pickup, it doesn’t quietly put it in dealerships. It spends millions on TV and online advertising to let truck buyers know it’s time to step up and buy. The same goes for you. It’s going to cost money to grow your fan base as an artist.

#1. Not thinking about promotion until after your recording is finished

It happens all the time. You’re so engaged with writing and recording your new songs, getting them onto the streaming services, and getting your CDs out that you only start thinking about promotion after your release is ready. But here’s a secret: you should always be thinking about promotion. If fans don’t hear from you for a long time, they forget about you. You need to retain mindshare. When you’re working on new material, engage fans early and get them excited before the album’s out. Every day, think about what kind of content you can put out there on social media and via email to remind fans how badly they want to listen to your amazing music.

Related Posts
Creative advice for your next music videos
How Much Does Streaming Pay?
A release strategy to fill your yearly calendar
How to use Spotify Canvas to add looping video to your streams
10 posts to help you make more money with your music