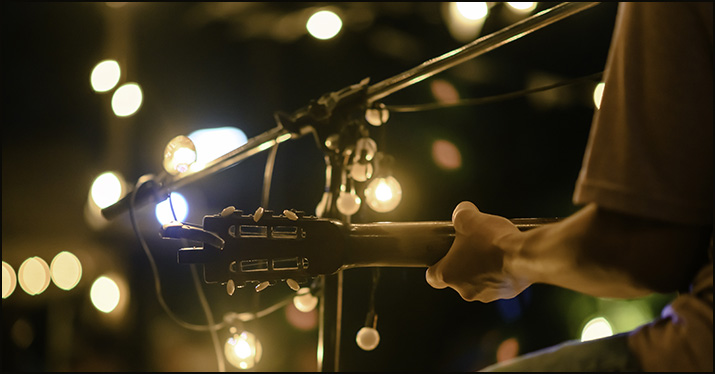 Jazz musicians know and integrate substitution chords (AKA chord substitution or reharmonization) on a regular basis, but musicians who play other genres of music can also employ this concept to great effect.

Substitution chords can add a welcome change to a final verse or chorus of an original composition, or they can help you put a unique stamp on a cover song.

What is chord substitution?

Simply put, the idea is to use one chord in place of another. Technically, any chord can be substituted for any other chord, but I’ve included a few guidelines to help you create a richer harmonic palette that supports the melody and adds to or alters the feel of the music.

Why use substitution chords?

In jazz and blues, performers might change the chords of standard tunes to give their soloists new ideas to work with. Performers wanting to take a song from one genre and transpose it to another can often do so by substituting a few chords to create progressions that are more genre-appropriate. It can also make playing rhythm a more rewarding experience.

Composers will often employ reharmonization to common progressions to help them come up with new ideas for songs. Take “Just What I Needed” by the Cars, which plays around with the familiar I-V-vi-IV progression (think “Don’t Stop Believing” by Journey).

For the verses in the Cars’ song, instead of playing E-B-C#m-A, they play E-B-C#m-G#, which gives the song a fresh twist. Then, in the lines that lead into the solos and chorus, they change it up again, employing E-B-G#-A. Two variations of an overused progression make for a constantly surprising song.

Instead of a G7 chord (GBDF), why not play a G9 (GBDFA) and give your soloist another note to play with? Both chords function the same way, since they both feature that all-important F natural.

Or, try adding sixths or major sevenths to spice up boring progressions. These notes don’t alter the way your chords function, they simply add color. The Beatles often employed this trick to exotic effect. A G6 chord gives “She Loves You” its iconic ending. On “This Boy,” they spiced up a common doo wop chord progression by using a major seventh as the I chord. Add a sixth to your minor chords to see how it shakes things up.

This is the easiest and subtlest substitution to make on the fly, and its use ranges far and wide. Simply replace any major chord with its relative minor, or vice versa. A relative minor is the minor chord three half-steps below a major chord. The relative minor for C is Am. Because Am shares two of the same notes as C (ACE compared to CEG), you can easily replace one for the other. Likewise, you can substitute a iii chord for a I chord (e.g. an Em for a C) because the two chords share two notes.

The dominant 7th, or V7, chord is one of the most important chords in western music, so perhaps it’s surprising that there are numerous substitutions you can make. Try using a ii7 chord (Dm7 in the key of C), or an augmented V chord (G+, which is GBD#). There are two diminished seventh chords that can also work, vii°7 (B,D,E,G#) or #ii°7 (D#F#AC). The bVII chord (BbDF) or even a VII7 (BD#F#A) chord can also work.

Here is another substitute for dominant 7th chord, one that is used frequently in jazz. The classic tritone substitution progression is ii-IIb7-I (instead of ii-V7-I.) “The Girl from Ipanema” is probably the most famous song that employs this progression. You can hear it in the very first verse over the words “when she passes, each one she passes, goes ‘ahhh.’” The song is in F and instead of playing a C7 (the dominant seventh chord), Antonio Carlos Jobim uses a Gb7 (Gb is a tritone, or three whole steps, away from C). Although substituting a Gb7 for a C7 may seem like a stretch, it works for two reasons. First, both chords share two of the notes that are important for leading to F major (Bb and E/Fb); second, the ii-IIb7-I progression produces a nice half-step descending bassline that is pleasing to the ear (G, Gb, F).

“Wendy” by the Beach Boys also uses a tritone substitution to introduce the organ solo. (1:09 in this video)

You can “borrow” chords from the minor scale of your major key. In C major, for example, you normally only use chords that employ the white keys. But jazz, blues, rock, and country use “blue notes” – notes from the minor scale – all the time. Taking that idea to the next level you can borrow whole chords from C minor and use them for substitutions. We’ve already mentioned one borrowed chord: the bVII7, which would be a Bb7 in the key of C, as a substitute for a V7 chord. Other popular borrowed chords are iv, which you can substitute for a IV chord (e.g. using an Fm instead of F in the key of C), and a bVI chord (Ab major in C), which can be used either as a substitute for I or as a way to lead into your V chord.

Santo and Johnny’s “Sleepwalk” offers a classic use of the borrowed iv chord. Here they take the “Heart and Soul” progression (C-Am-F-G) and simply substitute an Fm for F.

This one can be the most fun, though it’s not one you want to surprise your band with during a live performance. The idea behind same note substitution is to replace a chord that uses the same note that’s being played in the melody. Take “Silent Night,” for example. The opening melody, played over G major, is D E D B. Because this part is played twice, you are hanging on the G major chord for twelve measures. So how can we spice that up? A good place to start is that B note. According to this concept you can simply swap out any chord that features a B. Obviously, some chords are going to work better in this context than others (E major is especially jarring; Cmaj7 is rather beautiful), but try them all out and see what you come up with.

One example of this in pop music is Bruno Mars’ “Lazy Song.” In the verse he repeats the chords G-D-C three times. Then he swaps out that D for a B7. That chord allows him to sing the same melody, but with the added benefit of the B7 chord “pulling” up to C major, which makes us feel like we’ve arrived somewhere.

The easiest way to begin using substitution chords is to take a page from the Cars and Santo and Johnny: start with a classic progression (or one of your own creations) and play around with it, using some of the above tips to replace certain chords. Perhaps this will give you ideas for new songs, or, like with Bruno Mars, maybe you’ll find a way to shake up a repeating progression. Then try reharmonizing cover tunes to see if you can create something new. Below is one version of “Silent Night” I created. See what you can come up with. Warning: once you start going down this road, you may find yourself spending hours, lost in musical enjoyment.

5 thoughts on “Use substitution chords to spice up your songs”