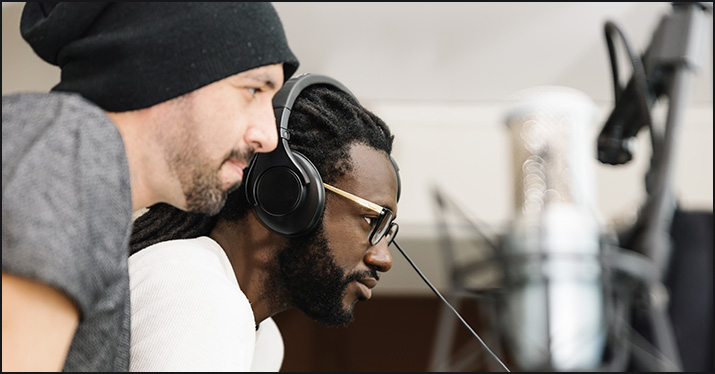 Over the next few weeks, I’ll dive into what points are and when a producer should get them. But let’s start with the basics: What is the difference between a music producer and a recording engineer?

As a musician, you’ve probably heard talk of producer points, something along the lines of, “As producer, I want three points on that recording.”

Have you ever wondered, “What does that even mean?”

Well, over the next few weeks, I’ll dive into this question to explain what points are, how they work, when a producer should get points, and whether (and when) a producer may also be entitled to a songwriter split of your song they just produced.

But let’s start with the basics: What is the difference between a producer and an engineer? And what is an executive producer?

Now, my personal experience might not be too different from what many an independent artist goes through. You see, way back in the day when I went into the studio with my band, we had our songs, we liked them, we were broke, and we were ignorant. The studio came with an engineer, and the engineer recorded our album and mixed it. And that was fine, but it may not have led to the best sounding album possible.

You see, we couldn’t afford a producer. So what’s the difference, you ask?

Well, the main difference is that, while the producer and the engineer both have a healthy understanding of the technical aspects of music production, producers have an added level of artistic and creative vision to make a recording, arrangement, and performance the best they can be. As such, while many music producers are also good sound engineers, sound engineers don’t necessarily make good producers.

Your recording engineer is a technician. He or she sets up the studio and recording equipment, chooses and places the mics, and operates the soundboard and other equipment during a recording session. If you have a producer, the engineer works under the supervision of that producer. The engineer’s main job is to use his/her technical skills to make sure the producer’s and artist’s visions come to fruition. Often, the engineer is also responsible for mixing the recorded tracks.

A producer, largely, is the creative leader of a recording session or album. He or she is in charge of the sound, the vibe and the overall recording. As such, a producer may rearrange songs, coach musicians on how to play on a track, help artists pick which songs to record, mix the recording (sometimes), decide the sequence of the album tracks, and maybe even play an instrument or add sounds to a recording. In fact, a hip hop producer may do even more, actually creating the beat or even the whole music track. Heck, if you think of a someone like Rick Rubin, a producer may even play psychologist with the band members during the recording session. In short, the producer is a super important creative contributor to the of the recording.

The role of executive producer

So what does an executive producer do then? Well, in my experience, while the executive producer can sometimes perform many of the producers’ functions, they usually have a financial and an administrative role, overseeing the recording budget, hiring session players, and securing funding for the recording. In other words, on most indie recordings, the person getting credit as exec producer is usually the one paying for the project.

So there you have it. Hopefully I’ve clarified the difference between engineer, producer, and executive producer. Next time, I’ll discuss whether and when your producer deserves points, what that means, how it works, how many they may be entitled to, and how that translates into dollars.

5 thoughts on “What’s the difference between an engineer and a music producer?”