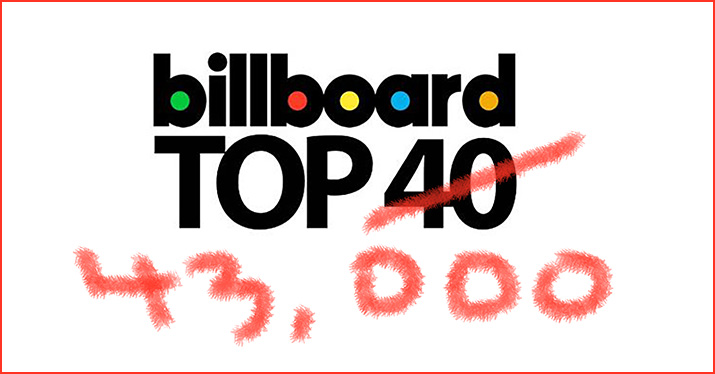 In the continuing democratization of the music industry, Spotify and other streaming sites are spreading the wealth as more artists are getting their share of the pie every year.

The CLIMB is a podcast produced by Brent Baxter and Johnny Dwinell dedicated to helping singers, songwriters, and artists gain leverage in the music business. Now part of the American Songwriter Podcast Network, The CLIMB provides insights, advice, and conversation to help you better understand the new music industry. This post is excerpted from Episode #238, “Artists, Welcome To The Middle Class.”

Johnny Dwinell: I’m going to unpack and comment on a few articles that have come out recently, specifically on Daniel Ek, the 37-year-old CEO of Spotify. The one that caught my eye was on Music Business Worldwide, and the headline reads, “Spotify Thinks The Top 40 Is Over (and other key takeaways from its Q2 results),” based on information Ek has to report to the stockholders. Some of you might have heard the soundbites from this or that that the Top 40 is dead and now it’s the top 43,000. But what does that mean?

Before streaming, there were only two choices you had when you wanted to listen to music: you had to listen to what you owned or you listened to the radio. Typically, in a given year, the Top 40 was going to account for 90 percent of all the radio spins across the country. Now, week to week, that doesn’t mean there were 40 artists in the Top 40. If you had a couple of killer releases that came out that year, and those artists have, let’s say two or three singles on the charts, the Top 40 that represents 90 percent of all the radio spins in the US — which is where a huge chunk of the money was made in the publishing — that might be 20-25 artists. A very exclusive club. Which is why this is such good news and I’m excited to share it with everybody. It speaks to how the digital platform is changing from the broadcast platform.

“Mathematically constricting” is how you would describe physical distribution. On your grocery shelves, every little space they have for the smallest hot sauce bottle — that space is worth money, and if they’re not generating profit on that one-inch square of retail space, they’re going to take that item off and put something else on.

Brent Baxter: And it’s not even whether or not you’re turning a profit. It’s “could we be making more profit off that space with somebody else?”

Johnny Dwinell: Right. And since it’s limited by physical real estate, they can’t put everything out there, there isn’t enough space. Only the most profitable products are going to be on there. Same thing with Blockbuster video, remember them? Did Blockbuster have documentaries? Yeah. But Blockbuster, by its name, they’re renting blockbuster DVDs. But then Netflix comes along and all of a sudden there are an endless number of documentaries that are available because it’s streaming. There’s no physical limitation, so it opens up access to all these other titles. And if it’s good — and if they’re marketing it and making people aware that it’s available — then you have the opportunity to make money because you can get it to the viewers. 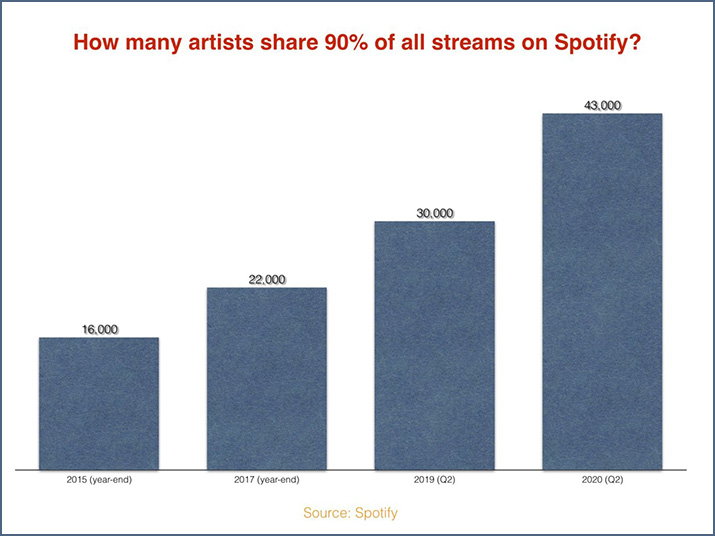 Well, number one, we’ve got artists who are figuring out how to market and, number two, they’re figuring out they don’t need anyone’s permission to find their audience. The spoils are being shared more widely. The middle class is on the rise in a very significant way. Think about this, go up to 30,000 feet — the major record companies and all the major firms that traditionally thrive in a market where the blockbuster artists exclusively hog all the streams, how are they reacting to this market shift? Isn’t that going to be pretty interesting?

If we go back to the Netflix comparison, do documentaries make as much money as a blockbuster movie — Bird Box for example? I don’t know the numbers, but I bet that’s got significantly more streams than all the documentaries combined. But all those documentaries are making money, they’re getting traffic, they’re generating revenue. And that’s really exciting.

I go back to thinking about things like how American Songwriter magazine put together a podcast network with 15 different podcasts, so now that network, as an aggregate, becomes extremely attractive to advertisers. Why? Because of the traffic. He or she who owns the traffic rules the road. Think about what that means in the music industry. The labels used to control the traffic. You weren’t going to get any traffic unless you were on the radio and the only way you could get on the radio was if you were on a label.

Brent Baxter: That why it was such a big deal a few years ago when Bobby Bones — he’s the top Country Music DJ in Nashville — got hold of Chris Janson’s independent “Buy Me A Boat” and started spinning it because he thought it was cool. And then “Buy Me A Boat” blows up and now Chris Janson is signed and has a thriving career. And that’s why it was such a big deal, because you didn’t get that kind of attention on a national level for this independent stuff, but Bobby could do that. And that’s why it made news, because it was the exception.

Johnny Dwinell: Yeah, but that’s a lottery ticket. You can’t bet on that.

Right now, Spotify has 8 million paid subscribers. 3.1 million in Europe, 2.3 million in North America — and that’s just Spotify; you’ve got Apple, Amazon, and we’re still in the baby stages. This is not a mature market. Another article that came out in Digital Music News that reads “AWAL Says ‘Hundreds’ of Artists Earning Over $100,000/Year from Streaming.” Just from streaming.

Brent Baxter: Might I note that artist revenues off of places like Spotify are much better than what they pay songwriters.

Johnny Dwinell: Yes. What I want to do is to continually give everybody a bigger picture on how the chess pieces are being moved and how the free market is putting pressure on the industry to make certain moves. One of the big takeaways from the first article we were discussing about Daniel Ek and Spotify is, how are the big businesses, how are the major record labels and big management firms and publishing companies going to pivot? How are they going to react to this market shift? All of a sudden, there’s a lot of money to be made in the middle class of the music industry.

There’s lots more to the conversation… listen to the entire podcast!

The CLIMB is a podcast produced by Brent Baxter (award-winning hit songwriter) and Johnny Dwinell (owner of Daredevil Production) that is dedicated to helping singers, songwriters, and artists like you gain leverage in the music business because that’s what you’re gonna need. It’s not just about your talent – you’ve got to bring the business, and that’s why it’s called “The CLIMB,” it’s an acronym that stands for “creating leverage in the music business.”

Related Posts
Fuel for your music career — a collection of music industry resources
How to turn music royalties into a cash advance
How to advance your music career by taking little bets
Stop saying your songs are “great”
Your 2020 album release calendar: A checklist to get your record released for the holidays