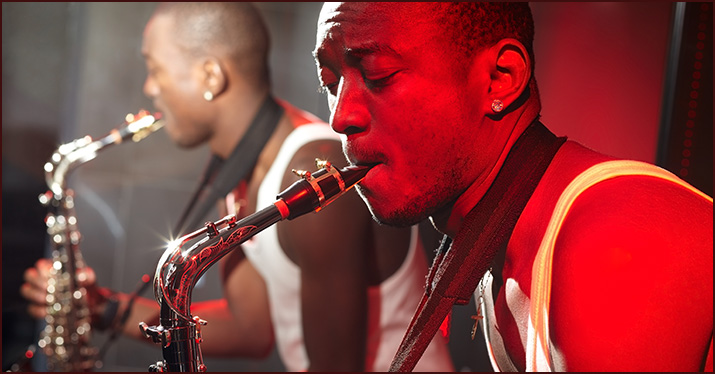 So much about recording saxophone and other reed instruments depends on the player, the room, the mics, the style of play, and how the track fits into the song overall. Here are some recording tips from a veteran producer.

When preparing to record brass and reed instruments – and when recording saxophone in particular – the player and the tone he or she is able to get from the instrument are vitally important. If you’re recording a professional with a lot of studio experience who knows how to get certain tones out of the instrument, you’re going to have a very different approach than if you’re in a home studio recording someone who’s new to the instrument and playing stacked notes.

“Take Grover Washington, Jr., for example,” says producer/engineer/studio owner Jon Marc Weiss. “I had the good fortune of recording saxophone with Grover on a session in the mid ’90s. He was as good as it gets. His tone was amazing. You could pretty much put a mic anywhere and it was going to sound good because he could resonate his sax so well.”

“To be honest, I was pretty intimidated. Here’s this internationally recognized artist who has worked with the best engineers in the world. But from the first note he played, I could tell it was going to be the easiest session I ever had. Every noise he was making was the greatest sound I ever heard. He had a beautiful vintage instrument that was perfectly maintained and he knew how to play it.”

In a recording situation, if you have the quality mics and pre-amps to do it, you should probably put more than one mic on the sax. With sax players, there’s typically a lot of movement and activity going on. A more professional player who is used to working in a studio setting might be able to stay still and work the mic, but in general, sax players tend to move around while they play. So a good approach to get consistent dynamics and a full tone is to use multiple mics to balance the sound as the player moves around.

The most common approach is to start with a large diaphragm condenser (LDC) mic about 10-15″ in front of the bell. If that sounds a little too harsh, or you want a softer tone, pull it out a little farther. Don’t point the mic directly into the bell, as you might get some wind noise or odd reflectivity back into the mic. Positioning the mic at different angles (start at 45 degrees) can help remove the unwanted artifacts. 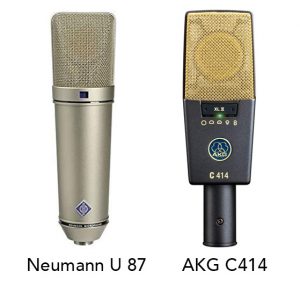 A common go-to mic in this situation in a pro studio is a Neumann U 87. Of course, that mic costs over $3,000, so it might be inaccessible for home-studio owners. There’s also the AKG C414, which retails for around $1,000. The good news for the home studio enthusiast these days is you can spend $300-500 and get a really good mic, and there are other decent options for even less.

If your LDC mic has switchable pickup patterns, set it to a cardioid pattern to begin. You wouldn’t want a hyper-cardioid pattern due to the aforementioned movement and activity. Set it somewhere between cardioid and omni if your mic has a variable pattern selector. In some cases, if the room sounds great, you might even want to put the mic in omni. You’re going to get a less-focused sound in omni, you’ll get more of the room sound, which may be what you’re after. The tighter the pickup pattern, the more directional the mic’s going to be and the more focused the sound.

A great approach for a second mic is to put a ribbon microphone above the player, a good 3-4 feet above the instrument. A ribbon mic has a way of taking the harshness out of brass and reed instruments.

In some cases, you’re not looking for that perfect tone. You already have your mix, you’re recording a sax solo, and you need it to rip through the mix, so you already know what instruments you need this to sit on top of. Move the mic around the horn to find that sound you need to get the right presence from the sax. In some instances, you’re stacking tracks to get harmonies and a full horn section type of sound and, in those cases, you don’t want something squeaky and midrange present. If you want something softer, move further away from the bell.

When recording your sax or reed instrument, there are situations where you’re going to want a real natural sound. Like in jazz, you’re going to want a little more room noise from that overhead ribbon mic so you get a little of the key noise. In a really poppy record, you just want to hear that screaming sax, so you might focus more on your primary mic in the front and less on the room mic.

If the sax is a big part of the song, you can play with the mic placement and put one over to the side and get a wider sound. Talk to the sax player and get tips from him. Find out how he’s liked his sax miked in the past.

“You take your primary tone out of the bell, and you take your secondary tone to compensate in one way or another to fill out the sound to suit your needs,” says Jon. “A ribbon mic is fantastic for that. 20 or so years ago, ribbon mics were more or less gone from the typical recording environment. You’d find them in orchestral recordings and things like that, but they’ve come back into wider use because there’s a place for them in the modern studio and they offer interesting presence peaks that work very well for saxophone. You can get a lot of air without having to use EQ, it’ll pull that 2 kHz honking sound out, which is nice, because the more EQ you use, the more phase distortion you get.”

“There’s a 2 kHz bump that happens in brass instruments – it’s the go-to frequency to pull back in brass, where you get that squeaky tone. If there’s too much of it, you almost get this kazoo sound and not enough of the body of the sax. ” 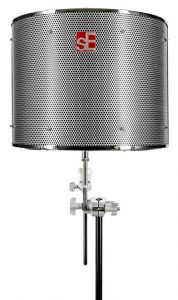 If you’re in a room that’s small or doesn’t have great acoustic control, you’ll probably get a lot of resonant frequencies from a sax. Certain notes you hit are going to scream in the room. Using some type of baffle around the mic is highly recommended to keep the energy concentrated and dampened around the mic. An sE Electronics Reflexion Filter ($200) will work great for cutting sax or vocals in a small studio. For anything that’s loud and in a very small room, it focuses the energy right into the mic and removes a lot of the reflections and resonant frequencies.

Another tool to aid in recording sax is an audio compressor. Sax tends to be very dynamic, so the same approach you might use on vocals also works great for smoothing out the dynamics of sax. “My way of applying compression to avoid the unwanted artifacts,” says Jon, “is to go 2:1 or 3:1 for tracking. Then, in the mix, I hit it again with a 2:1 or 3:1. That’ll give you a little more of a consistent dynamic without all of the pumping which results from hard compression or limiting.”

“With a sax, there’s a very distinct bite at the beginning of the sound. If you’re using a compressor and you’re finding that the top of the note is being lost in the mix, you can pull the attack time up a little bit so that you get that bite out of the sax before the threshold is reached. I’d say somewhere between 25–100 milliseconds, depending on the dynamic of the song, the tempo, or the type of playing. Is the player using staccato hits or is it more of a smooth, long performance? Again, so much depends on the performer, the room, and the plans for the sax track in the recording. Don’t get too tied up in the technical aspects. Use your ears and, if you like what you hear, go with it.”