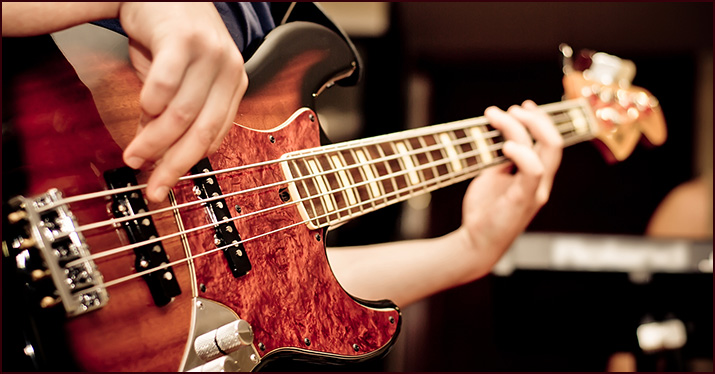 When a band enters any studio to record songs — including a home studio — they’ll usually cut their rhythm tracks first. If they’re recording an album’s worth of material, it’s a good bet that some songs will be upbeat and aggressive and others soft and slow, and you’re not going to want the same bass guitar tone for every song.

When you’re recording an electric bass guitar, blending a direct injection (DI) line recording with a miked cabinet is the safest way to make sure you’re going to get the tone you’re looking for. If you have the preamps, mics, and tracks to do it, you might want to record as many as four bass tracks — a DI and three mics — and somewhere in the blend of those four individual tracks, you’ll find the tone you need for each song.

“The direct input provides an articulate sound with a lot of presence in the upper mid-range,” says producer and studio owner Jon Weiss. “For heavy metal, for example, you’re probably not going to get that top-end articulation you need out of a miked amp. I’m thinking of a sound like Metallica’s, with that tight bass sound around those pingy kick drums. You’re not going to get that tone solely out of the amp, so the DIs are the way to go. With the DI, there’s no acoustic element, you’re not miking a woofer. The signal is going to be more transient and you’re going to get all of that top end articulation.”

“I tend to concentrate on the attack of the bass sound with the DI, and the roundness and the body of the bass I pull out of the microphone. A miked amp is smoother as well. The miked amp can give you a lot of that middle and low end tone that you’re not going to get out of a DI.”

“The style of music can certainly dictate the kinds of mics you’re going to choose, and how far the mic’s going to be away from the cabinet. But, it’s always safe to have the DI. There’s more unaltered information coming from the DI, and you’re getting the fastest transients you can imagine. When you’re miking something, the speaker has to move, and the mic has to move — it’s sort of slowing things down. That’s why it’s good to have a combination of the two.”

There’s a lot of useful information in the DI’s signal, including the attack and middle- to upper-range frequencies. You’ll be going directly into the console in some cases and directly into a preamp in others.

A preamp takes a signal that is incredibly low — millivolts — and brings it up to a level that can be used in a consumer or studio environment. You couldn’t plug your headphones right into your bass, you’d get nothing out of it — an amplifier needs to be there. So a preamp takes a sound that’s very low and boosts it way up.

“If your preamp doesn’t have a quarter-inch input that’s designed to be a line-level input for bass, you’ll want to use a direct box,” advises Jon. “Your DI has an XLR connection that goes into your mic pre. A lot of people prefer the sound of a DI going into a mic pre over the sound of the bass being plugged directly into the line input. It’s a different kind of sound, and it depends on a lot of things. It depends on the kind of mic pres you have and whether you’re going to plug into a Neve console that costs $200,000 or a TASCAM board at your friend’s project studio. If it’s the latter, you probably want to plug right into a preamp. If you’re working with a nice board, you’re probably going to want to plug into a DI and have that be the way the signal is being brought into the control room for processing.”

The majority of the mics used on a bass or guitar cabinet are dynamic mics — they can handle high sound pressure levels (SPL) and they’re more focused on the kinds of tones produced by the instruments. There are some situations where you might put a condenser mic on a bass cabinet — the Beatles, for instance, often used a Telefunken U47 condenser on the cabinet. But more common will be something like the AKG D12 microphone, which is one of the first kick drum and bass mics ever produced, which features a larger diaphragm designed to pick up bass frequencies.

To get tone from a miked amp, it’s a combination of a lot of factors, including the type of bass, amp, and cabinet; the mic; the room you’re in; and the positioning of the mic.

“For a punchier tone, you’re going to want to be closer to the amp with your mic, just slightly off-axis with the speaker,” says Jon. “The trick is to go into the room with your headphones on and have the bass player play something very simple and consistent, eighth notes, and you move the mic until you get the tone you’re looking for. It’s a combination of the distance from the amp itself, the angle to the speaker, and what part of the speaker you’re focused on. Are you in the middle, on the cone, or on the outside edge of the speaker? They’re going to provide very different sounds.”

“For jazz, I might just go with the AKG D112 about 6 inches off the cone. If you’re trying to get that low frequency of the bass, you might want to pull that mic back a few feet. A low E on the bass, in order to hear that correctly, you need to be about 30 feet away (ed. note: a bass guitar playing a low E produces a sound wave roughly 27.5 feet in length). You ever wonder why, when someone’s driving by your house with this huge subwoofer pumping, and all of a sudden the dishes in your kitchen cupboard are shaking and you’re thinking the guy’s head must be rattling – it sounds like the bolts are coming out of the car? In actuality, you’re hearing the low frequencies he’s not even getting in the car because he’s too close to it.”

If you’re in a situation where you can’t go DI — e.g. a bassist who is not willing to use that signal because the tone is so different than what he gets from his amp — using multiple mics on the cabinet is a good alternate solution. Experiment with placement and mics: try a dynamic mic up close and a condenser anywhere from 2-10 feet back to pick up the low end. As always, patience and creativity can yield interesting results.

“I’ve seen situations where people will create a tent,” says Jon. You take a boom stand and lay it on top of the amp, then take a blanket or a heavy mat and drape it over to make a tent, and then you take a shotgun mic and put it in there. That does some really neat stuff. That’s how you can get that ultra low bass sound, when you really want to shake the room.” 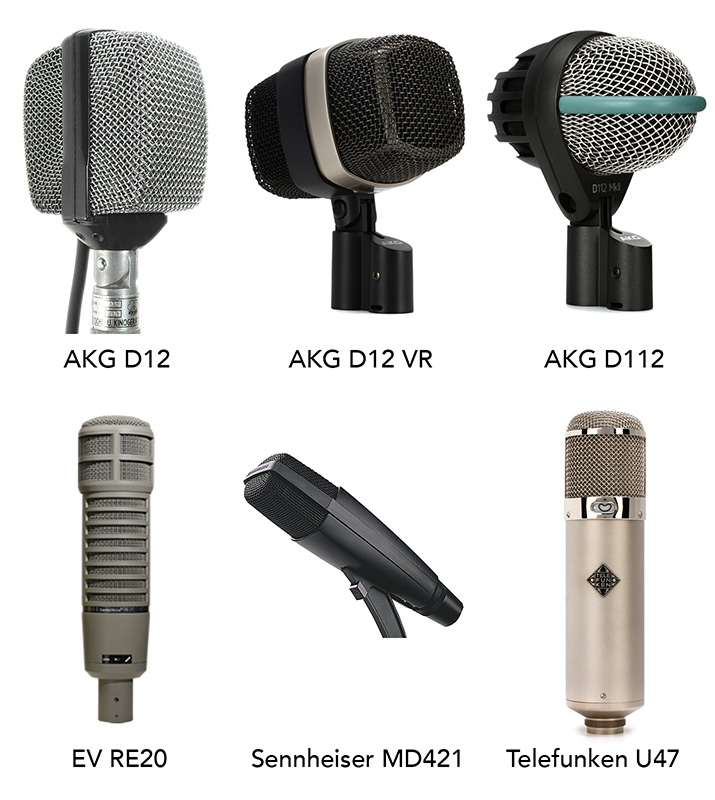 1) AKG D12 or D12E. The D12 has a larger diaphragm specifically designed for bass instruments and has been around since the ’60s. You’d have to find these used as they’re no longer produced (there is a D12 VR available for $499).

2) AKG D112. In the ’80s, AKG came out with a replacement for the D12E. The egg-shaped D112 ($229) has a higher presence peak that will give you the more articulated sound found in a lot of today’s rock recordings.

3) Sennheiser MD421. The MD 421-II ($399) has a really high peak to it and less low end, which provides an interesting dynamic contrast, especially when you’re using more than one mic.

There’s always a lot of noise swarming around the 250 Hz with the bass. That’s the go-to frequency you will almost always see engineers notching back, pulling that frequency out. That’s the muddiness of the bass and often the reason you have muddiness in your mix.

“One thing I tend to do, especially in R&B and pop, it to put a little bit of chorus on the bass,” says Jon. “It tends to sweeten it up a little. And compression is huge for cutting bass. With bass, you can get a little more attack out of the instrument if you set the compressor so that it doesn’t kick in until 30, 50, or 100 milliseconds into the note, and that’s going to allow the note to bite through. And with a mic on a bass cab, you’re dealing with resonant frequencies — you hit a certain note and the entire room’s going to ring, but you don’t want that note to stick out more than any other note the bassist is playing, and that’s where compression is going to help a lot.”

“In rock and in hard rock, you’re fighting with a bunch of screaming guitars, so the bass is going to have to be more mid-range present. It’s happened to me a lot, where the bass player wants to solo his track in the mix, and he’ll start saying, ‘it’s got too much of this upper-mid thing going on.’ Then you work on those upper-mid frequencies, take it out of solo and put it back in the mix, and it doesn’t cut. It needs that upper mid. So soloing the bass sound and trying to get it to sound its best on its own is not going to work in almost every situation.”

“You might find yourself fighting with the bass player a little bit when you’re soloing the tracks. They want the sound to be the same as what’s coming out of their amp, and that isn’t always the sound that’s going to sit best in the recording, so you really have to work the psychology there a little bit.”

6 thoughts on “Recording bass guitar — Tips from a veteran producer”