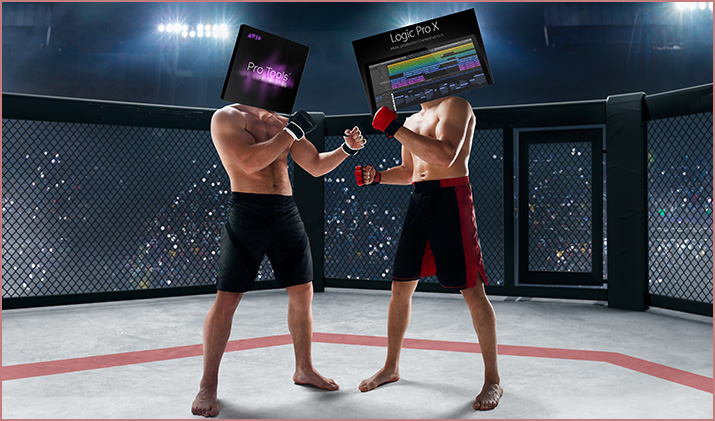 Bobby Borg: The topic for my discussion today is Pro Tools versus Logic, and we’ll break that down into three areas:

So, when it comes to home recording equipment, there’s still a debate as to which is the better platform, Avid’s Pro Tools or Apple’s Logic Pro, and here to help us settle the score is the go-to expert in Hollywood. So let’s go ahead and start with price. Which of these programs is cheaper, because a lot of the independent artists out there are on tight budgets, so this is an important factor.

Maurizio De Togni: Price is crucial for everybody, whether you’re working with a small or big budget. When it comes to purchase price, if you want to just own the software, at the end of the day, Logic is less expensive — and is actually it’s the only option you have. When it comes to leasing or renting, that’s the new-school trend for this kind of software, Logic gives you all the options: you can buy or you can lease it long-term. It’s going to cost you more with Pro Tools, you can’t buy it, but you can pay little-by-little — it’s as low as $10 a month, I believe, with a student or academic discount. When it comes to Apple (Logic), there are no discounts, it’s just one price for everybody — it’s less than $20 a month.

Bobby Borg: OK — there are more options with Pro Tools, but in the end, Pro Tools is the more expensive product.

Bobby Borg: So, let’s move on to the learning curve. Which one is easier to learn? Of course, I ask this question because a lot of the independent artists out there will be excited to get the software uploaded and get right to work. They want to start creating and they don’t want to deal with headaches and tech stuff.

Maurizio De Togni: The learning curves, as I like to say to my clients and students and anyone I’m coaching/mentoring, are on opposite ends of the spectrum. When it comes to Logic, you can upload to the computer and in an hour or so, you can play around with it and get things out of it. Of course, you might want some formal training, but you can move around relatively quickly at the very beginning. Then, of course, as you want to go deeper, get more professional, it gets more challenging and more complicated.

When it comes to Pro Tools, it’s the opposite. You upload the software and then after an hour, a day, a week, you’re still at square one. It’s a story I hear from all my clients and students: you can’t start using it without formal training. There’s a lot of pain, it’s like walking through the woods and dealing with mosquitos and you don’t know where you’re going, but you continue day after day and then you emerge on this beautiful beach. This paradise is your reward — it’s like a long-term relationship. You get married with Pro Tools, Logic is an easy-going guy, you can get along with easily, even if it’s for one night.

Bobby Borg: OK, so the last point is standardization. Which software is going to be easier to communicate with and speak with the rest of the world, you know with other producers with other industry professionals? I’ll make an analogy with word processing programs… when it comes to Microsoft Word compared to something like iWorks’ Pages, I’d say Pages is much easier to use and manipulate, but when you go to intern or when you go to work, businesses are more likely going to ask you to understand and use Word, so it behooves you to know how to use it. Is it similar to what we’re talking about Pro Tools and Logic?

Maurizio De Togni: Very similar. I would say Apple’s Logic is like the iWork Pages software and Pro Tools is the Microsoft Word in this analogy. In terms of cross-platform compatibility, Pro Tools works on a Mac, Apple, PC, it doesn’t matter. Logic only works on a Mac, which might be a limitation for some people. And in the end it’s a matter of, as you said, which is the most spoken language? And we could even throw in another competitor, Ableton Live. So let’s consider English, Spanish, and Chinese languages. In business, you can go pretty far knowing any of these languages, but once you know English, especially in the Americas, you can’t go wrong. At the end of the day, Pro Tools is your main language — no offense to the others.

Bobby Borg: No, of course not. It just makes it makes sense. If you’re going to communicate broadly, Pro Tools is the more universal choice. You made a great comparison when we spoke on the phone the other day. You said, if we were comparing a Lamborghini and a Mercedes, we might say the Lamborghini is a more sophisticated, better car, but it’s also not the most practical choice for your day-to-day driving. So, in this example, Pro Tools might be more advanced and more sophisticated, but for the independent artists out there, it may not be the most practical choice.

Maurizio De Togni: Yeah, you’re not going to go to the grocery store in a Lamborghini, I’d go with the Mercedes. And, in the end, it doesn’t sound like a compromise at all because a Mercedes is still more than a decent car — so we’re saying you can’t go wrong.

3 thoughts on “Logic or Pro Tools? Which is better for you?”