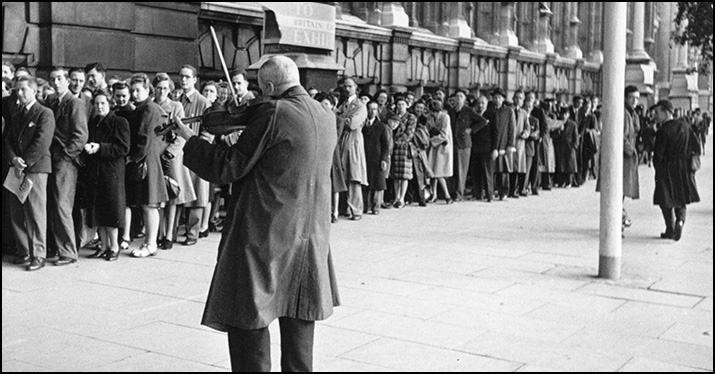 Around the country, indie musicians of all styles and genres are playing live music at the polls as people wait to vote. Here are some tips for bringing your music to the voters.

As November 3rd approaches, Americans across the continent and political spectrum are lining up to vote. Many are waiting in line for hours and, chances are, equally dense crowds will fill polling places on Election Day.

To support voters — and the democratic process itself — independent musicians are venturing out to play music at the polls and share the experience with voters waiting in line. If you’re interested in adding your own beautiful noise to the mix, here are some tips to help you do it safely and effectively.

Why do you want to perform in relation to the election? Knowing your exact goal can help you have a positive experience and share your music in an effective way.

Dave Darwin is a veteran circus and street performer who has collaborated with musicians in a variety of election-oriented contexts. In one recent performance, Darwin teamed up with a brass band marching through Philadelphia communities that often report low voter turnout. The performers’ goal? To surprise and delight residents, let them know that early voting was happening, and hand out voting information if requested.

During other performances, Darwin went to early voting sites and sought to entertain voters in line, many of whom seemed exhausted and irritable after having waited for hours.

“Don’t let people walk away from the line and skip voting because they’re bored or fed up,” he says. “If they have to go pick up their kids or need to use a bathroom or something, that’s one thing — but your mission in this sort of situation is to keep people in line until they have the chance to do what they came to do. Once they’re there, keep them alert and interested to stay long enough to vote.”

“Most people come prepared with smartphones and headphones. At these performances, some people ignore me and that’s cool. Those people don’t need me. But some people are so bored and tired that you can really make a difference in their experience.”

People stuck in voting lines for hours may not have much physical territory in which to maneuver, so respect everyone’s personal space, maintain plenty of safe distance, and wear a mask as much as possible. If you’re singing, consider using a vocalist-friendly mask like The Singer’s Mask, or give even more distance than you normally would, as singing has been shown to propel potentially infected aerosols.

If you’re playing a wind or brass instrument, the same applies — keep up with the latest research, give extra distance to avoid spreading germs to voters, and consider putting a filter on the end of your instrument (if possible) to capture aerosols.

Remember that, while being outside can reduce the chances of transmission, it doesn’t eliminate it, so follow the science and engage conscientiously.

Communities can have unique rules when it comes to public performances and many have separate regulations related to activities around polling sites. Before you head out, take a few minutes to contact fellow musicians who are used to outdoor performing in your area as well as local election officials, law enforcement, or anyone else who can give you an idea of what’s generally acceptable in your community.

When it comes to performing for voters, “don’t overthink it,” says Darwin. “There may be permits you’re supposed to get in certain areas, but if there isn’t time to do that, you may want to go out and play anyway. If a poll worker asks you to stop or a police officer tells you to move, listen and don’t cause trouble.”

When you arrive at a polling site ready to share your music, it never hurts to touch base with a poll worker and introduce yourself before you start playing.

“You want to make your presence as painless as possible for the people working at the polls, because those are tough, stressful jobs and they’re working long hours,” says Darwin. “Ask them if they have any preferences for where you go. I had one poll worker tell me, ‘just try to keep everyone in line, and go over there in particular, because those people still have two hours to go.’”

Darwin recommends bringing acoustic or battery-powered instruments and being able to move quickly. If the line at your polling place stretches blocks into the distance, you may want to play a song or two for one section, then move to the next section after that. Similarly, if poll workers or law enforcement ask you to relocate or pack up, mobility and flexibility are helpful. And finally, if the voters in line just aren’t into your music and you feel you’re doing more harm than good, there’s no shame in saying a polite “thank you” and relocating to a different spot.

As Darwin was parading through northern Philadelphia to an early voting site — marching with musicians playing tuba, trombone, sax, and trumpet — four black SUVs pulled up and Grammy-winning rapper Common jumped out.

“He came up to the band, talked to them, and they knew one of his songs, so they improvised a performance and he freestyled for a while,” says Darwin. “It was very exciting to see him. I think he was doing a larger event near City Hall, had some extra time, and decided to visit other voting sites and see if he could help with morale. And it really did.”

Guest appearances from world-famous musicians should not be counted on, but adapting to the unpredictability of the situation should be. Could that violinist playing for voters the next block down be interested in an impromptu jam? Approach her respectfully and find out. Does that tired-looking guy who’s been in line for three hours want to sing a tune with you to pass the time? Give it a go, have fun, and do what you can to keep spirits high and votes flowing.

Voters in line can be a captive audience, so if people seem annoyed or uninterested in your music, politely move on. On the other hand, if the section of line that you’re playing for seems to be thoroughly digging your performance, settle in for as long as feels appropriate and enjoy the connection while it lasts.

Give voters a story

Standing in line for hours may discourage some potential voters and intimidate others. If you can leave your unexpected audience members with a warm glow and uplifting memories of hearing spontaneous music while they waited in line, they may share their stories with friends, in person or via social media, and make others more likely to brave the lines and vote as well.

Playing for voters in line may be an unusual performance opportunity, but it’s a performance nonetheless. Bring your A-game and enjoy every minute.