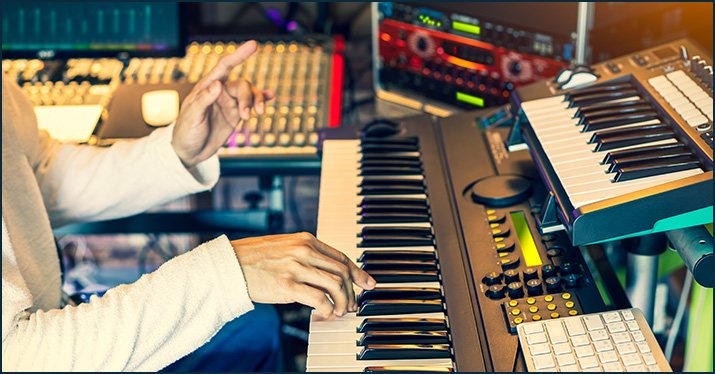 Musician, author, educator, and music industry consultant Bobby Borg talks with Anika Paris — an award-winning singer/songwriter, classically trained pianist, and published poet and author — about ways to write unique pop songs. Excerpted from the video, “Writing Unique Pop Songs,” this post touches on three elements of songwriting you can focus on to help your songs stand out.

Bobby Borg: I’ve got Anika Paris with me in the studio, and today’s discussion will focus on writing unique pop songs. I’m going to break this down into three elements:

Uniqueness is probably the most important thing for a songwriter or artist — finding your own style that makes you distinct in the crowded marketplace — but trying to fit into the pop mold while being unique is challenging. So let’s address three approaches that might open your mind about this.

Annika, point number one is lyrical perspective. One of the angles we can take in regard to trying to find a unique voice is writing lyrics from fresh perspective. For example, there are a million love songs out there, from a man to a woman or a woman to a man, so, how about from a trans person to another trans person or to a straight male or female — or how about from the perspective of a Muslim American living post 9/11. Obviously, it has to be true to who you are, but can lyrical perspective be one way to find a unique voice?

Anika Paris: Absolutely, and I love those two examples. I think it’s a great idea to have a different lyrical perspective. You want to capture your listener immediately, from the top of a song. You know, I had a trans student who started off as Chris and ended up as Natalie and wrote an album as a man and then a second as a woman, and released them as a double record. That was very interesting. I don’t know if you know the rapper Nas, he has a song called “I Gave You Power,” and it’s from the perspective of a gun. The entire song is written from the gun as if it had a point of view and was talking. So you can go outside the box can it remain pop as long as you’re clever about it.

Katy Perry, for example, her big hit was “I Kissed A Girl,” Billy Eilish has a new song out called “Wish You Were Gay,” so people are breaking the mold a little bit being daring. Lizzo has a song about fat shaming called “Truth Hurts” that went viral right out of the gate — although she’s been in the industry since she was 14 years old. Or maybe something confessional like Demi Lovato’s “Sober.” She writes a song confessing to her parents that, “I’m sorry mommy and daddy, I’m not sober anymore.” So there are many different lyrical perspectives you can take, whether it’s personal, sexual, whether it’s being socially conscious…

Bobby Borg: So this could be the thing that sets you apart.

Anika Paris: I absolutely think so. My favorite song in college was “Every Breath You Take,” and I’m thinking it’s a great love song, right? It’s about a stalker. So, when you listen to a lyric, sometimes the interpretation can be different than what it is actually about. So, even if you write from a different perspective, the audience might not necessarily know what it is right away, but still, there’s something interesting about it.

Bobby Borg: Let’s move on to number two, which is merging styles. Bringing in different characteristics from different musical cultures could be something that gives you a little bit of an edge. I’m thinking about this pop artist, Aurora, and what sets her apart from other pop artists is certain phrasings and her voice. You can hear it in how she uses her voice and with certain instruments in her arrangements that gives them a bit of a different sound. So merging styles can be another way to find a unique sound.

Anika Paris: I think that’s a great idea. A lot of hip-hop artists are being paired with different genres. One of the biggest stories I remember is Paul Simon, after Simon and Garfunkel, he fell in love with music from Johannesburg with all these African singers, and he went to Johannesburg and recorded Graceland, which was a huge hit. Americans are fascinated by global music, so if you’re from somewhere else, I say bring in an instrument you know — something from your heritage. I’m Puerto Rican, and I did a song with a caciques chief — a Taino Indian — who came in and did a chant on a song and he played an indigenous flute. So bring in stuff from your own culture.

Bobby Borg: I love it. So let’s talk about breaking molds. There’s been research about this, people have studied pop songs and found common attributes. And the majority of pop songs are in 4/4 or 6/8, but maybe we break maybe the mold by throwing in a measure of 7/8 or something — maybe that could be what makes you unique and stand out. Or, verse/chorus/verse/chorus/bridge/chorus is a format that works because there’s a balance between predictability and surprise, but what if we play with that? Maybe people will start to recognize that’s what you do.

Anika Paris: Song structure is like a map, but you can say, “Why don’t we go with Waze?” You know how Waze takes you down cute little side streets and stuff? So there’s a way that you could have an interesting song that’s not so predictable — mix it up a little bit. Maybe start with the hook or break the song down.

I’m gonna give you a perfect example — one song that incorporates all three things we’ve discussed: “Bohemian Rhapsody.” Opening line: “Mama, just killed a man/Put a gun against his head/Pulled the trigger now he’s dead.” Number two, it’s based and it’s formed like a concerto in symphonic music, it’s three individual separate parts — not verse/chorus — and it merges opera and rock. So, how can we become innovative and creative today?

Bobby Borg: When I saw the film [Bohemian Rhapsody] — that was his intention. “Let’s do it because nobody else is doing it. Let’s do something that’s going to be unique and get us to stand out.” And and the way Queen thought from that perspective in all of their songs — “We Will Rock You,” the whole idea was to write something that will engage the audience. These guys were really brilliant with thinking about their position in the marketplace. Music is supposed to shake up the world and get us emotionally excited.

Related Posts
Songwriting Dos and Don’ts
Writing lyrics with depth
Ben Folds’ “2020” — A case study for indie artists
The risks and rewards of social advocacy in music
How to write a great melody, Part 2: Putting the rules to work

2 thoughts on “Writing pop songs that stand out”