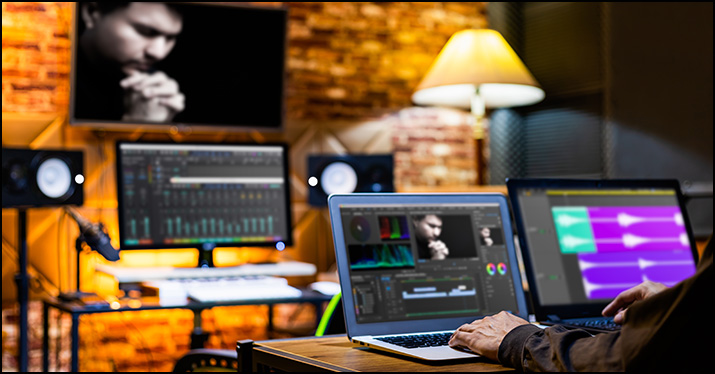 In video number seven in our ongoing series on rights and royalties, Tony van Veen digs into sync licenses. How does an indie musician get in on the action, and how do sync licenses work?

Today, I’m going to cover sync licensing or, officially, “synchronization licensing.” What is sync licensing? Well, whenever music is used in another medium, most commonly video, it is “synchronized” with that medium. “Sync license” generally refers to a legal agreement between the copyright owner of a piece of music and a person who wants to use that piece of music, which permits the synchronization of the copyrighted music to another type of content.

Sync licensing consists of two parts, and if you’ve been following our video series, you know there are two copyrights for any song. In this case, there is the sync license for the composition and then there’s the master use license for the sound recording. Both copyrights need to be licensed and paid for in a sync deal.

Interestingly enough, a successful sync placement will also earn the rights owners a public performance royalty in many cases. Imagine that your song has been synced up to, say, an Apple ad that’s airing 50 times a day on national TV. The performance royalties will add up really quickly. So who licenses songs for sync?

Generally speaking, the vast majority of sync deals will fall into the following four categories:

There are some additional opportunities for independent cinema and what we call “micro syncs” that generate low-level income by licensing content to indie video creators — including for video streaming channels like YouTube.

In a traditional one-to-one sync deal, a video creator may look for a certain type of sound to accompany a particular scene, and to find the right song, they’ll frequently rely on a music supervisor. Music supervisors often search for music by genre, mood, time era, energy or tempo, instrument/vocal type, and other criteria. This is why, for you as an artist and songwriter, taking care of the metadata to fill in those tags when you submit your music to sync libraries is a critical first step to unlocking your passive sync opportunities.

You’ve probably heard mention of sync licensing companies, or sync libraries. There are a number of sync libraries that represent artists and songwriters to music supervisors. As you know, Disc Makers has partnered with CD Baby for digital distribution. What you may not know is, CD Baby also has a sync licensing division that regularly places songs by independent artists in film, TV, and commercials.

Generally speaking, the expertise of these sync libraries depends on their network of music supervisors and their knowledge of the catalog they represent. CD Baby’s sync catalog is too big for anyone to know every track, which is why they use sophisticated technology to allow music supervisors to do intelligent searches of their extensive sync catalog to find exactly the right track for their project.

Because of the size of its sync catalog, CD Baby sync has been successful at placing extremely obscure, niche music in ads and TV shows, earning a nice license fee for the artists and for the composer in the process.

Sync libraries traditionally take a fee for every sync transaction they negotiate. The agent’s fee varies depending on the demand for an artist’s music and on the size of the potential sync opportunity (it can fall anywhere between 20–50 percent of the value of the sync).

You’ve probably heard that sync libraries often ask for exclusivity to represent your music for the duration of the contract. This can be a bit of a double-edged sword. On the one hand, exclusivity should motivate the agent to pitch your music. On the other hand, if, after several pitches, the agent has been unsuccessful, they could lose interest and your music will just sit on a shelf for the duration of deal. That said, exclusives are part of the sync library landscape and as an independent artist, you likely will have limited (probably no) ability to negotiate the terms of your sync agreement with a library. They will promise that they will pitch your music and you will have to decide if you believe them.

So, what about the deal itself? Well, when a sync offer is presented, there are two main factors that you, as the artist, will need to consider: the total earnings, which includes the licensing lump sum up front as well as any long-tail public performance royalties, and the overall promotional value of the sync.

The price is negotiated based on the type and value of the sync. Is it an ad for a major brand? Is it a blockbuster movie? Is it as an independent production? It also depends on your prominence as an artist. A big-name artist will collect a much higher fee than an emerging band.

A big factor in the value of the sync is also the promotional value of the placement. Imagine that Apple ad airing 50 times a day on national TV. It has huge promo value, which can drive the price of the sync down.

In the end, the whole negotiation process can be boiled down to this: the more you, the artist, wants to do the sync, the lower the value of the contract will be. As an independent artist and songwriter, however, you can offer one advantage. As both performing artist and songwriter, you can do a “one-stop” deal with the music supervisor, which is attractive because it is much simpler to get all the necessary clearances from one party than negotiate with an artist (or label) for the sound recording and then again with the publisher for the composition rights.

There are quite a few other technicalities to sync licensing, including the scope of use, the term the license, the territory, and the nature of use, however, this gets more and more complicated, so you’re going to have to rely on your agent, as soon as you get one, to educate you on these matters.

Are you ready to go after sync licenses?

What do you need to do if you want to make your music available for sync licensing? Well, as an indie artist, it can be overwhelming to figure out where to go and what to do to put yourself in the best position to get sync placements.

If you don’t really know where to start, check out CD Baby’s sync licensing service. Their whole library is available for searching at www.CDBabylicensing.com. They’ve got tons of music supervisors searching that library all the time and have recent major placements for Nordstrom, the Stranger Things Netflix series, Volkswagen, Jeep, and plenty of others. It costs nothing to sign up, and it’s a bit like a lottery ticket… you may get lucky!

Related Posts
License your music (and generate revenue)
5 things you should do before you seek a music licensing deal
Music publishing for 2nd graders
What are mechanical royalties (and how do I get mine)?
Your copyright and royalty questions answered

One thought on “How does sync licensing work?”