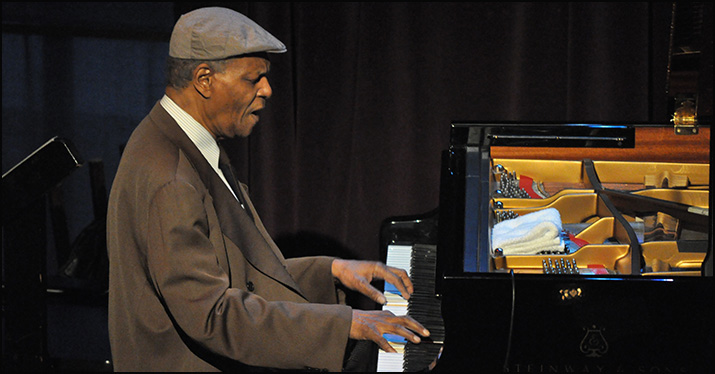 McCoy Tyner, a giant of jazz piano, embodied powerful lessons that music-makers of any sort can learn from.

In early March, just as the pandemic was taking its hold in the US, the great McCoy Tyner passed away. Jazz fans around the world know him for making acoustic pianos sound like beautiful thunder — but even those indie artists who have never heard a lick of jazz in their life can benefit from remembering, listening to, and learning from him. Here are a few lessons that musicians everywhere can take from Tyner’s life and music.

Don’t let anything limit your sound

The best way I can describe seeing McCoy Tyner play live is that he pulled more power out of a small ensemble (acoustic piano, upright bass, and drums) than most stadium rock and pop acts create with infinitely more sophisticated tools and resources. Case in point, the first time I saw him play at Blues Alley in Washington, DC with his trio, I had just been in the audience for the Tibetan Freedom Concert, which featured virtually every major touring act in the world at the time. When it came to sheer energy and “bigness” of sound, Tyner and his trio simply blew them all away.

As you craft and refine your music as an indie musician, don’t fall into the “if only” trap of thinking that a big, powerful sound depends on the right guitar, the expensive amp, the full string section on your record, the big-name producer you can’t afford, or anything else outside of yourself. Just like Tyner did, find creative ways to work with what you have and make your sound more expansive and moving than you ever thought possible.

Play with and learn from the best

Though best known for his work with the legendary saxophonist and composer John Coltrane, Tyner began playing with a wide cross-section of world-class musicians early in his career and continued doing so until the end.

I’ve long believed that one of the best ways to grow as a musician is to work with the best players you can find, those who challenge you and make you stretch your limits. Just like Tyner did, indie artists of all sorts should work with as many great musicians as they can, at every stage of their careers, learning as much as possible from each jam, writing session, recording session, and gig.

The second time I saw Tyner play, it was at the Blue Note in New York City, where he was playing in a duo — not with another traditional instrumentalist, but with Savion Glover, the virtuosic tap dancer. The two jammed beautifully, with Glover summoning more tonal and rhythmic variations from his feet than seemed possible, and Tyner bringing his usual mixture of power, grace, and play to the equation while always pushing his instrument, and the duo’s collaborative jams, into new territory.

In your own work, don’t feel that you have to follow any pre-written formula when it comes to choosing your collaborators. Intrigued by the idea of forming a band with a classical bassoonist, Indian drummer, and psychedelic VJ? Give it a try and see what happens.

When I first interviewed Tyner for Keyboard magazine, he told me that he had originally been a hand percussionist, and that he brought that influence to his piano playing. Indeed, he often treated the piano less like a delicate instrument that could summon Chopin nocturnes and Brahms lullabies and more like full-on drum kit that was meant to be pummeled with precision, art, and beauty. I am just one of countless pianists who have found inspiration in Tyner’s no-holds-barred percussive approach to the piano, a take on the instrument unlike anything I’d previously heard.

As you’re working on your own music, experiment with your instrument to play it in unconventional ways and bring your experience playing other instruments to spark your creative approaches to the other.

Explore different ways to think about chords, melody, and harmony

Tyner is well known for his quartal harmonies — chords and melodies built on perfect fourths that are stacked on top of each other. It’s a jagged, angular sound that can be cutting or beautiful depending on the context, and Tyner deployed it with skill and taste.

As you craft your own work, follow Tyner’s example and try experimenting with different intervals in unusual places. What would happen if you threw in a series of tritone melody jumps during your solo on a country-western tune? What about dirtying up a dance-pop track with chords constructed with both major and minor seconds clustered close to each other? Possibilities are endless, so follow Tyner’s example, build something unique in your playing, and see what happens.

Featured Posts
Ben Folds’ “2020” — A case study for indie artists
What can indie artists learn from a classical conductor?
The case for playing every style of music
The functional relationship between math and music
Why you should learn another instrument