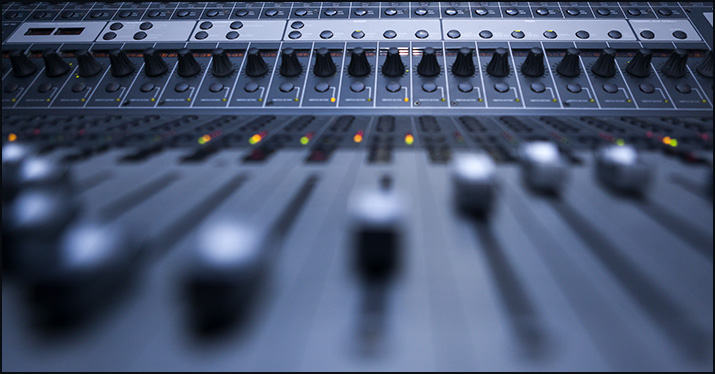 From stereo placement to EQ, busing to reverb, veteran music producer and engineer Jon Marc Weiss gives pro advice and insights on how to manage your mix in your home studio.

Do you have a go-to formula when you’re deciding where to place instruments in the stereo field when you are mixing?

Not really. Mixing is the art of the whole process. And to start by saying, “I want to put the bass here and the drums here” I think is maybe something to avoid. One big mistake people will make is to pan the drums hard right and left, so the hi-hat is somewhere behind your head and the ride cymbal is on the other side and the drums are just taking up too much of the stereo space – it’s fighting with the background vocals, it’s fighting with the stereo guitars…

Mixing is like a puzzle, and one thing that a professional engineer is going to do that a novice won’t is to know how to carve out space in the mix for each individual instrument. There’s a certain space where the bass needs to be. You don’t want the bass guitar stepping on the kick drum, and then if you have the bass, kick, snare, and vocals all panned in the middle, they’re all fighting for the same space in the mix.

Is there any time you might pan something hard right and left?

That said, a common mistake is reverb used on a snare that’s panned hard left and right when the snare is in the middle. For a tighter, more natural snare sound, pan the reverb channels somewhere around 11 and 1 o’clock, so the reverb is on either side of the snare. Background tracks that have been compiled of many individual vocal tracks are often panned hard left and right, because you’ve already positioned the tracks where you want them stacked around the lead vocal track.

But, as you’ve said before, the mixing puzzle isn’t just about panning.

No, you’re right, you have to recognize it’s not just a panning issue, but also a frequency issue. What frequencies are overlapping? It’s very common with people who are inexperienced with mixing to take each instrument and to solo it. Then you go to EQ and add effects and say, “Yeah! That’s the bass sound I want!” And then you put it into the track and all of a sudden the bass sounds terrible. It’s one thing to solo a track to remove a click or a buzz noise or some specific thing. But when you’re dealing with EQ and effects, you need to listen to it among multiple tracks to help you to carve out the space.

I’d also recommend removing the frequencies you don’t need. Like with the bass, you’ve got the low end and the high-end articulation, but you can get rid of all this high-frequency energy that you don’t need — it’s just going to clean the track up. Same thing with vocals. Get rid of the low frequency information that’s below where you need the vocal to be. That’s going to remove the noise of the singer bouncing around the studio, maybe hitting the mic stand by mistake. It’s going to allow each instrument to be focused, it’s going to really clean up the mix, and that will help it translate to all the different speakers and systems it’s going to be played through.

Another thing to note is checking the mix in mono. You want to hit that “mono” button on your console or on the DAW on the stereo bus so you can hear how the mix is going to translate to mono. Sometimes you’ll put an effect on the guitar or the background vocals and then you put the track in mono and the background vocals all but disappear — they’re there, but they’re way lower than they should be. It’s very important to check in mono, even in this day and age where everything is stereo. If you’re in a bar and they just have a mono system, then all of a sudden your lead guitar is gone.

What about the idea of listening from another place in the room, or another room altogether?

That’s another good trick, to get out of the room and listen to the entire mix from somewhere down the hall. You’re going to hear things sticking out or things that aren’t loud enough that way. It’s a good habit to get into, it’s good for your ears. But don’t use this technique to mix for EQ, you’re going to have all sorts of artifacts introduced to the mix from a vantage point down the hall and bass frequencies will probably be more prominent. But it’s a good thing to do to check your levels.

Technically, a bus is a combining amplifier that takes multiple sources and puts them through a single source or stereo source. In practice, that translates to being a tool that can be used to control the volume of multiple tracks in a stereo mix with one or two faders.

When I’m mixing, I want to take all of the drums and mix them to the point where I can raise and lower the volume of the overall drum mix with one or two faders. It makes it a lot easier. And you can do things like compress the bus — you don’t have to compress each individual element, so it makes it sound a lot more cohesive. It just gives you so much more overall control. It allows me to mute the drums, instead of having nine tracks, I have two. I can also automate the drums overall, which is a lot easier.

It also gives you some flexibility, it allows you to use less CPU processing — like compressing the stereo bus mix instead of each individual track — things like that. Most analog mixers, as well as the digital DAWs, give you the ability to bus, which means taking multiple tracks and sending them down either a mono or stereo bus.

But it’s not the same as bouncing tracks down?

No, this is different from bouncing or consolidating, where you’re actually recording the tracks. The problem with that is if you want to tweak the snare after the fact, you’re kind of stuck. Some DAWs make it easy to undo, so you can tweak the individual tracks, but I wouldn’t recommend consolidating the tracks as your first step.

Let’s say I’m in my home recording studio, I’ve got seven tracks of drums, and I’m busing them to a stereo mix. Do I still have the ability to tweak the individual drum tracks as necessary?

Absolutely. Let’s say those seven tracks are two overheads, bass, snare, hi-hat, and a couple of toms. You still have those tracks on 1-7, so you can individually modify them, but you also have this bus, which you can mute with two fingers, you can add reverb to the drums to give them a little ambience… it’s just an easier way to work and most studios are going to work that way. The engineer is going to work like that, and then the producer is going to have a certain amount of bused mixes to work with — the drums will be bused, maybe the multiple guitar tracks will be bused to a stereo mix. So when you’re done, you’re working with these stereo sub mixes, and you can take that stereo mix and you can change the panning. Let’s say the drums are just too wide, and you don’t need them to be that wide, you can modify the panning and tighten them up. Or if they’re too confined you can widen them up.

Do you typically have a limit to how many bused mixes you can have?

Not with DAWs these days. It’s really easy to pull up a bus and use it. So I’ll do a drum bus, and a guitar bus, and a background vocals bus. And sometimes I will comp that to tape. If I’m really satisfied with the mix for the background vocals, and I want to free up some resources in the DAW, I’ll do a bounce to a stereo mix.

Give me one piece of advice in regard to effects — say, reverb.

And, again, don’t pan your reverb hard right and left if the instrument — especially if there are a lot of different instruments going on at once — is taking up a specific space in the stereo field. Like, why have reverb panned hard right and left on the drums if they range from 9 o’clock to 3 o’clock?

What are your thoughts on “fixing it in the mix?”

Man, can that be a mess. When you’re tracking, the last thing you want to be doing is fixing a technical problem and killing the vibe of the session, but the idea of “fixing it in the mix” is not the greatest. Can you fix things in the mix? Yes. But you can’t push things off. Then you get to the point where you think you’re going in for a mixing session, but you’re actually doing a whole lot of clean-up work.

Related Posts
How to record better tones in your home studio
Psychology and the music producer
10 ways to lay the groundwork for an amazing vocal recording session
Home studio posts – recording tips for producers, engineers, and musicians
Getting great results when you’re the singer AND producer in your home studio