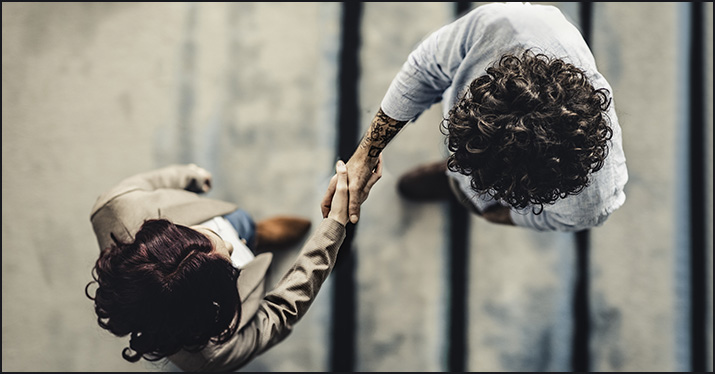 Musician, author, educator, and music industry consultant Bobby Borg talks to Freddy Nager, a former label executive and marketing pro, about the importance of networking and how to do it effectively — especially if you hate the idea of networking on its face. Excerpted from “Networking in the Music Industry,” this post and video highlight the importance of building relationships for your music career.

Bobby Borg: Our topic for discussion today is networking and I’ve got a great guest with me: Freddy Nager is a USC adjunct professor, a former major label executive, and owner of Atomic Tango, which is a marketing and consulting company. So, Freddy, everyone tells us go out and network, that we have to go out and mix and mingle and meet people. But there are a lot of musicians who simply don’t care to do it because maybe they’re shy and introverted, or they don’t have the means to do it, or perhaps they just feel uncomfortable — like, “What do I say?” It’s can be an awkward situation. You have some great ideas about this, so I’d like to open it up and ask for your thoughts about networking, in general.

Freddy Nager: Networking is critical. Everything I’ve achieved in my career has come with the help of other people. We all need the help of others, we all need to connect, but here’s the funny thing: as much as networking has helped me, I hate networking! More specifically, I hate going to “networking events” where you’re thrust into a room full of strangers — some of them are already “cliquing up” like a junior high school hallway, and if you’re not a Type-A party person, that’s just a nightmare. I’m gonna have to go up to complete strangers and be interesting?

So I say, first thing, if you’re not comfortable being the life of the party amongst a bunch of strangers — and very few people are — don’t do it. Instead, network in small groups or just one-on-one. I’m meeting you, you’re meeting me. I may introduce you to people I know, you may introduce me to people you know. Networking is a chain of introductions. I meet somebody that I’m comfortable with, we share our interests, I learn about their interests and say, “you know, you should really meet this person,” and then that person may join you at the next coffee break. So you’re not being set up on some weird blind date with somebody you don’t even recognize. Like, the next time you and I hang out, I invite somebody along and I introduce them and since I was the one who introduced you, I facilitate the conversation and keep it focused on business.

Bobby Borg: How would you suggest people begin these introductions? Should you look at things that you already do? For example, maybe at work you know someone and you talk to that person and let them know things about what you do, and maybe they go, “Oh, really? My friend is involved in music, let me introduce you.” Or maybe at school there’s somebody you know who seems nice and approachable and you talk to them and tell them about what you do and that leads to introductions. So how do you galvanize these introductions?

Freddy Nager: When you first approach somebody for networking purposes, it’s not to sell. People don’t like to be sold to. We like to buy things, but we don’t like to be sold to. So, if you approach any kind of relationship and immediately start pitching, the defense shields come up. What does this person want from me? The approach you want to do in networking is: “I just want to get to know as many people as I can.” So the secret to networking is listening, because one thing people like to do is talk. People like to be listened to. If you want to be a great networker, become a great listener. Sincerely have interest in what the other person is saying. Now, if they’re a good person, in exchange, they’ll say, “so Bobby, what do you do? What are your interests?” If they’re a bad person, they’ll spend the hour talking about themselves and, OK, you wasted an hour and you move on.

The key to networking is building relationships, because a person you met yesterday may call you in three years and say, “Hey Freddy, you still playing music? I’ve got a friend who’s launching a new record label and he asked me to help find him some new artists.” That’s what’s happened to me. I have former students come back to me five, six, seven years later and say their boss needs a marketing consultant. I never pitched that student. I never went to a student and said, “Hey, you need to find me clients.” I listen to them, I build a relationship with them, and it grows from there.

Bobby Borg: So you mentioned some some alternative ways to go about networking, which are absolutely fabulous, but there still are events and conventions that can be advantageous. For example, the NAMM show, which is a big music equipment event in Anaheim and other states. There are tons of people sprawled all over the place and my students go there and I provide helpful tips for them about what to do when they get there.

One of the things that bothers me, I gotta be honest with you, when I’m speaking on a panel, let’s say, and someone walks up to me and goes, “Bobby Berg? So what do you do?” And I’m like, go to my website and read about me and then come back with some questions. It annoys me, and it annoys many others, as well. What are some techniques people can use? Like, for example, do some research on the people you’re gonna see? Can you talk a little bit about some of the preparation people can do going into a networking situation?

Freddy Nager: There’s an old expression, “Know before you go.” Find out about other people going to this event — and it doesn’t have to be the VIPs or the panel speakers, it could be anybody. Get to know them. The beauty of social media — and I’m a social media critic — is that you can learn about people before you go to an event. You might even want to connect on social media before you meet them in person. That way, when you show up and you meet Bobby, you can say, “Hey, Bobby. I was checking out your website and I love the books you put out. What’s the next book you’re gonna publish?” You notice what I just said? I wasn’t selling myself, I knew Bobby ahead of time, I did my research on Bobby, and now I’m listening to what he wants, which is to sell and promote his book. That makes him bring down his defense shield.

Bobby Borg: I remember a teacher of interpersonal communication and marketing — I think “Extreme Marketing” was the name of the course — and there was one tip that just kept resonating throughout this whole class, and that was, “make people feel good about themselves.” Talk about other people and magical things will happen. It’s such a simple tip. I can remember I walked into a SESAC party, it was a Christmas party, and I recognized someone that I knew was gonna be there — I looked at the people who had RSVP’d — and one of these people was a manager by the name of Bud Prager. I knew a little bit about Bud Prager, he was a manager for some classic rock bands like Cream and Foreigner, so I did a little research and got some interesting stories about him, so I walked up and I go, “Mr. Prager, it’s a pleasure to meet you.” And I introduced him to my friend and said, “You know, I just wanted to say I really loved that one story…” and I mentioned one of the stories and he lit up. “Sit down! Please, have a drink with me.” These little things are so valuable, because so many people want to meet people in the industry — musicians, actors, models — when they come out to Los Angeles and these little valuable tips can make the difference between succeeding and not succeeding.