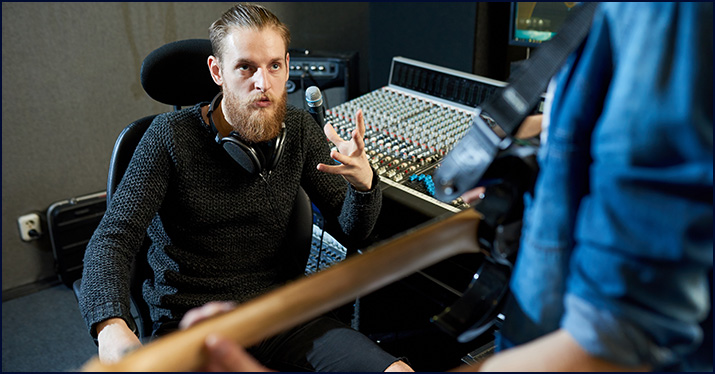 To make a great recording, sometimes a music producer has to do it all. From communicating, coaxing the best possible performance, and keeping an artist comfortable, a lot of a producer’s skills have little to do with recording techniques.

Jon Marc Weiss is an accomplished recording engineer, studio designer, and musician with 30 years’ experience. I sat with Jon to talk about being both an engineer and producer, some of the tricks of recording a good performance, and how to handle things when they start going off the rails.

Is it common to have a person who is solely acting as a music producer on an independent music production?
In higher level projects, there is going to be a record producer, and the producer is going to talk to the artist and act as a liaison with the engineer. The audio engineer is going to do very little communication with the artist. But there’s not always a producer, even on some bigger projects. I’d say the minority — maybe 40 percent — of the sessions I’ve worked on in my career had producers in the room.

A lot of times the producer is the artist, and sometimes they want to make all the decisions, they don’t look for any advice from the sound recording engineer. They see the engineer as someone who just pushes buttons. Others see the audio engineer as the person who makes them sound amazing, and they have high expectations.

So that means on 60 percent of the sessions where I work as a recording engineer, I’m actually doing a lot of the producing. I make small suggestions about improving the music, but the majority of the time when I’m not pressing buttons and EQing stuff, I’m working with the artist directly and talking back and forth with them about getting the best take. My job is not only to make the sound recording and handle that side of things, but also to work with the artist and make sure they’re happy and that they’re getting the most of the experience and their money — whether it’s their first time in the studio or their hundredth.

How important is it to set expectations for who is responsible for what before the sessions begin?
It’s very important. A lot of times it comes to the point where I have to say to the group, “I have to just talk to one person.” I’ll accept criticism and suggestions from everyone, but it gets to the point where the guitar player wants something, and the bass player comes in and he wants something different. You have to find a point person. If you’ve got conflicting stuff coming from all these different people, you’re putting the engineer in a difficult situation.

Before the session, you also have to sit with the artist and get a feel for what the style of music is and how much experience they have in the studio. I think that’s really important for the recording engineer to know, to know how to coach the person. Someone who’s recorded in studios for years and knows how to work the mic and headphones is going to put the headphones on and start singing and you’re probably going to get what you need. When it’s someone’s first time in the studio, or maybe they go in once a year, they’re going to be a bit greener and they’re going to need some coaching. Not just with their performance, but the way they’re working the mic. Or maybe they’re crinkling papers and you have to tell them, “Hey, the microphone’s really sensitive.” Some people don’t know that. I’ve been in sessions where we had to mute the space in between lines so that all the extraneous noise didn’t go to tape. Sometimes our job is to help the talent learn how to be a better musician.

I’ve found that the bigger the artist, the more they tend to let the recording engineer do what they do. Part of it is they’re picking you — they have 20 different studios they can afford to go to and they’re usually choosing to go to yours because of the engineer’s reputation. If you have somebody coming in off the street and it’s their first time in a studio and they want to control everything… that can turn into a big mess and setting expectations and roles is even more important.

What’s the most crucial thing to focus on as a music producer?
Enthusiasm. Support the artist and be enthusiastic about what they’re doing. Even if you’re telling them it’s not a great take, be enthusiastic about the fact that you think they can do a better job. You have to be good at focusing the artist and getting them to do the best they can. That’s obviously different from one performer to the next.

People are very sensitive about their artistry, so you really have to watch what you say. You have to make sure that nothing is condescending and that all of the tips and feedback you give are constructive. Like, if the artist says, “Ah, that take sucked,” you might say, “OK, let’s roll that again, I think you can get a better one,” not, “Yeah, you’re right, that really sucked.” There’s psychology there for sure.

Sometimes you can get a great performance in terms of dynamics and emotion, but the singer is having difficulty singing in tune. As an engineer you have to deal with that. It’s common that you’ll be working with an artist and there are some bad notes, but the energy and the performance are so good. That’s when the producer might decide to come back at a later time and surgically improve the take – I’ve done it with timing, I’ve done it with pitch, I’ve taken a great chorus and copied it and pasted it in other places to keep the energy at a certain level.

Also, if you’re an engineer and you’re not digging the music at all, you can give some bad vibes off. I don’t care what level you’re at as an engineer, different levels of talent are going to come through. You may not be as thrilled with today’s session as you were with yesterday’s, but you have to just deal with what you have, make the best of it, and stay upbeat. The worst thing that can happen, as an artist, is to go into a studio to work with an engineer who is just a dead fish. They’re not giving any feedback, they’re not into the music — that will kill the whole vibe. You have to bring a certain energy level, and you have to be consistent. You’ll always get a better take than if you’re negative and don’t try to help the artist achieve their best.

Would you say creating a comfortable environment is important, too?
Yes, absolutely. I had this one session, with this vocalist, a young woman, and her dad and her husband were there, and they thought she was going to be the next big thing. But we just couldn’t get a good take out of her. Her dad was totally on her — he was like, “When you’re in front of your mirror in your bedroom, you do such a good take, and then we come into the studio and you can barely perform.” Part of the problem was certainly that her dad and her husband were putting way too much pressure on her. You’re not going to get a great performance out of anyone that way.

Another big thing to remember is that this is supposed to be fun. When it starts to become work, it’s time to change the focus. So I asked her, “What’s different about when you’re in your room?” Obviously, she’s in a comfortable environment and she’s relaxed in her own room, so we brought the mirror, the bedside table, and candles from her room. I suggested she start burning candles in her room when she rehearsed and we replicated that in the studio, and it did the trick. She just needed something familiar to make her feel at home.

Bringing a little bit of home along is a great idea.
Well, sure. When you’re rehearsing, it’s typically in a room with the whole band, and everyone steps on each other enough to create this blanket of comfort. Then you step into a studio and it can be almost a clinical environment. You’ve got to be careful as an engineer not to make it too clinical and sterile. You’ve got to keep the smiles going and keep the vibe going.

I remember you saying that bass players often have a difficult transition from live to studio.
Like anyone else in a band, the bass player tries so hard to get that tone that they hear onstage. But when you record bass guitar, it tends not to sound like what it does when they’re standing next to their amp. I’ve just come to find that bass players tend to be the most difficult to please in the recording environment. Especially when you’re working in a mix situation, and the bass player says, “Hey, can you solo my bass? I want my bass to sound like Geddy Lee (Rush).” And you’re thinking, “That’s not going to work in the context of this music and this recording.”

The bass needs to stand out, but not stand out too much. The go-to frequency to pull out of the bass is 250 Hz, because that just muddies up the mix when you’ve got the bass in there with the guitars and the drums and everything else. You start losing the definition of the individual instruments. When you’re working with the mix, it’s a puzzle, you don’t want to have all these overlapping frequencies. Now some instruments are going to overlap each other by default, so you have to work to make room for each instrument. You need to scoop out the drums to make room for the bass, and scoop out the bass to make room for the guitar.

So, in many cases, when you solo the track, the bass player’s not going to be very happy with the tone on tape. I’ve had so much trouble with that. I’ve also had some incredible outcomes, where in the end, the bass player’s like “Wow, that sounds so good in the mix! I totally get why you needed to put that top end on the bass.”

Got any tricks to settle down a nervous performer? Sometimes they’re shredding while they’re warming up and then the red light goes on and they totally freeze.
There are lot of ways to settle an artist. A lot of times they’re just nervous. Sometimes, for a guitar player or a bass player, it’s the fact that they’re on the other side of that window that’s making them nervous. So you run a cable to the other room, mic the amp, and let the player sit in the studio with the engineer, right in front of the monitors, and that can break the ice.

Sometimes you just have to let them know that there’s time, there’s no pressure and no hurry, and I’m not going to press record until they’re ready. Of course, a lot of times you’re still pressing record to see if you can catch something magical. In this one studio, we had a little cap that we could put over the light so you couldn’t see that it was recording — that helped with some people.

One thought on “Psychology and the music producer”