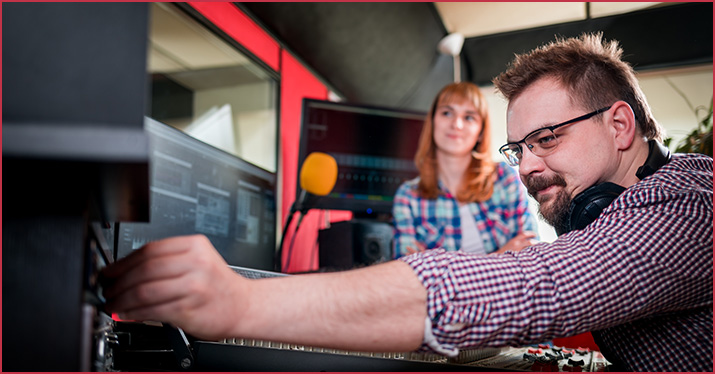 Musician, author, educator, and music industry consultant Bobby Borg has launched a video series aimed at breaking down music business and marketing basics. This post, excerpted from “Indie Producer Deals,” outlines the various options indie artists might have when it comes to hiring and working with a music producer. Read the transcript below for highlights and watch the entire video for more content and commentary.

Bobby Borg: I’ve got a great guest with me today, his name is Eric Corne. Eric is the producer of a number of charting Billboard blues albums, he’s a songwriter and artist whose work has been used in major television shows, and he’s the owner of Forty Below Records.

So Eric, a lot of people are really good at recording their own material in their home studios, but there are many of us who still want or need to hire a professional record producer and engineer, which brings us to the topic of the three main deals indie artists should know about when working with a music producer:

Let’s start with the barter deal. The barter deal is, essentially, a situation where you do something for someone and they do something in return. A story I’m familiar with is this high-level producer who noticed that his neighbor was a guitar player. So he says, “Hey, my daughter wants to learn guitar. Come over to my place, give her lessons, and afterward we’ll go downstairs to my studio and record your music.” They did that for two years and the artist ended up getting a killer record out of the deal. So, that scenario is not very common, but can you describe the barter deal a little bit for us? Is this is something that you’ve ever done? Is it sort of a pipe-dream to find an opportunity like the one I just explained?

Eric Corne: Well, I think I think that the barter deal can be a really good way to go when you’re starting out and it’s a great way to build your network because you can take some of your strengths and share those with somebody who has a weakness in that area, and then they may have a strengths in an area where you have a weakness, and it’s a great way to collaborate and combine skill sets as well as to flesh out your network. I think it’s something that’s gonna be a little more likely for developing artists and producers, but it’s a great way to start. It’s also a way to build up your resume and gain experience, and those things are invaluable when you’re just starting out.

Bobby Borg: I’ve also heard of situations, for example, if you were recording a jingle and you need a vocalist to come in and the vocalist says, “I’ll sing the backgrounds on your jingles if you record a track of my original music.” It’s a win-win.

Bobby Borg: Let’s move on to the on-spec deal. An on-spec deal is a situation where the producer is willing to work, maybe for free or a lesser rate, but with some sort of agreement of future payment. This could even involve the producer then maybe owning or sharing the copyrights of the songs. Can you describe this situation? Is it something that you would be willing to do or something that’s common?

Eric Corne: I don’t think it’s uncommon — it’s something that I’ve not really done a whole lot, maybe once or twice. I think you have to be careful and really strategic and work with somebody you feel is going to be successful because it’s really hard to generate income in the music business and for a record or artist to be successful. I would say the percentage of these deals that work out is probably not that high, so you have to be really confident that you’re working with an artist that you believe in and it’s important to have some sort of strategy to help make the project successful.

Bobby Borg: Right, so it’s not recording an artist and then just hoping it’s gonna pop and you’re gonna get your return on your investment.

You know, the interesting thing is, a lot of times I think younger producers and engineers want to have a piece of a project because they’re afraid they’re gonna work and spend their time producing this artist and the artist is gonna go off and make it huge and they’re gonna get left out. It’s a trait of being a bit naive because I’ve seen just the reverse happen much more often. You’re better off just charging for your time.

Which brings us to the next topic: work for hire. A work-for-hire relationship exists when you hire a producer or engineer for their services for a fee. This enables you to keep the rights to your master recordings and the rights to your songs. It’s strictly a business relationship where I pay you you provide a service for me. This is primarily the relationship you have outside of the record label deals you establish, correct?

Eric Corne: Yeah, almost exclusively, I work for hire. I also want to make clear that I might ask for a royalty on the back end, but I don’t ask for that until the recording costs have been recouped. The way I look at it, since I’m a producer and engineer, I have a day rate, and that’s my fee to engineer. For producing, I don’t ask for an extra fee, but I ask for royalties on the back end, so if the record is successful, after the recording costs are recouped, I would receive a royalty on on the profits as well as royalties that are being paid through third-party licenses like on sync deals or through SoundExchange, which collects royalties on digital airplay. That’s a really important revenue stream.

Bobby Borg: Do you own the masters or are you just getting a revenue share?

Eric Corne: I believe whoever pays for the recording — meaning whoever pays the engineer, the studio, the musicians — I believe they should own the recording. So, for most of my records, if they’re paying me for my services, they own their masters and they own their songs unless I’ve co-written the songs. I don’t ask for any publishing unless I contribute to the writing.