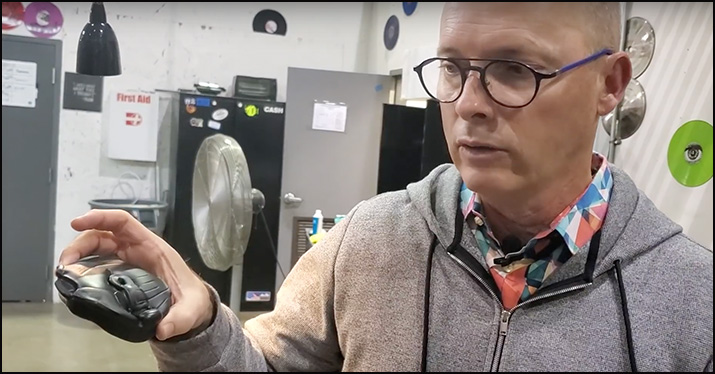 The Disc Makers YouTube Channel has a great video series called “The Indie Music Minute” that features Tony van Veen, CEO of Disc Makers, distributing nuggets of information and actionable ideas to help you make the most of your career as an indie music artist. Today we take a look at the vinyl LP presses in action.

No matter what your relationship to music is — artist, producer, music lover — the manufacturing process for CDs and vinyl is just plain cool to see in action. So let’s take a look at how vinyl records are manufactured! 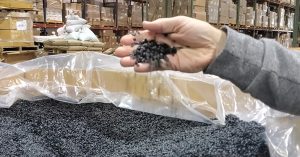 You won’t be surprised to learn that a vinyl record is made from vinyl. We use pure virgin vinyl that comes in these little pellets, delivered to us in big totes. We start with a flat lacquer that is cut at a mastering studio. When your master recording is played, a stylus cuts the groove into the soft lacquer, which is then dipped in a nickel solution. The nickel is electroplated and adheres to the lacquer. The nickel that’s peeled off is a negative image of the lacquer, which is then used as a stamper.

This stamper gets mounted into a vinyl record press, which you’ll see in the video. There’s a hopper that the vinyl goes into, and there’s a heating element that ‘s fed with steam. This heating element melts the vinyl and ultimately a vinyl puck is extruded — a chunk of vinyl that is melted and soft — which also gets mounted into the press, along with record labels that go on either side of the puck. 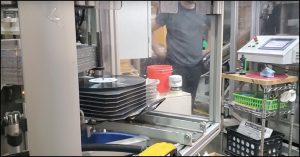 As you can see in the video, there’s a mold cavity with a stamper on the bottom and a stamper on top. The vinyl puck is in the middle and, when the mold closes, it presses the record flat with a label on either side. It takes about 30 seconds for the record to press and then cure, as water runs through the die to cool off the vinyl. After 30 seconds, it produces a record with a rough edge of excess vinyl that has to get trimmed off. That’s trimmed and voila! Another beautiful vinyl record comes off the press.

Let’s look at the record labels. Since the paper labels contain moisture, we can’t just load them on the press, because paper labels with moisture tend to crack when applied to the hot vinyl. So, believe it or not, what we do to take the moisture out is bake the labels in an old pizza oven. Once baked and all the moisture is out, the labels can go into the press. 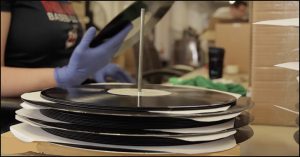 Once we have finished records, they have to get assembled, which is done here at an assembly line. There’s a quality-control step where every record gets checked, the center hole gets checked, and then the records gets sleeved by hand. Then they get jacketed and sent to the poly-wrapper. Then your finished records get packed into a carton and shipped right to you! Like I said, pretty cool, right?

Related Posts
Are we witnessing the rebirth of physical media?
Audio mastering for vinyl
How Much Does Streaming Pay?
9 groovy facts about vinyl records
How vinyl records work

3 thoughts on “The vinyl manufacturing process at work (watch the video!)”