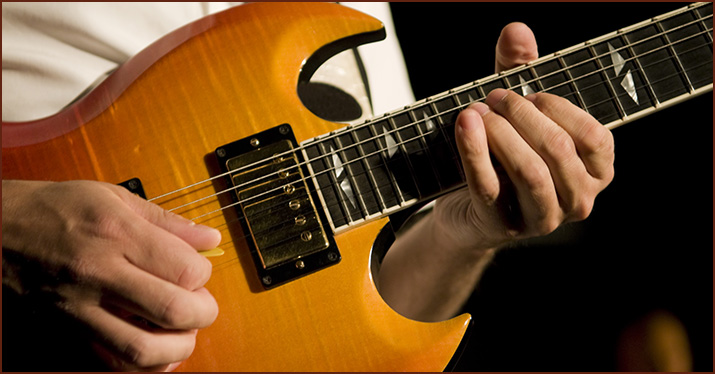 Study up on the Mixolydian Mode, queue up a nice Mixo chord progression, and you’ll see why guitar masters like Eddie Van Halen, Angus Young, and Duane Allman all love Mixo-Dorian Blues.

Let’s continue exploring various modes and stimulate creativity by expanding your musical vocabulary. Last time, we determined you can “Lift ’em up with the Lydian Mode.” In this post, I’ll break down Mixolydian and the hybrid scale you can use to improvise over it.

Like the Lydian Mode, Mixolydian differs from the major (Ionian) scale by just one note.

There might have been a time when fans of popular music would have found that flat-seventh note rather jarring, but since the 1950s, rock, blues, and country artists have used the Mixolydian mode so frequently it hardly even registers as a mode at all. In fact, using a Bb major chord in the key of C is so much more common than using a Bdim chord, you could argue that the pure major scale is far less common than some sort of major/Mixolydian hybrid is.

The standard “Mixolydian progression” is I-bVII-IV-I (C-Bb-F-C) and can be found in numerous songs (think of the outro in “Hey Jude”). Here’s another example.

Basically, if you’re in a major key and you hear a flat-seventh chord, you’re in Mixolydian. (Or if you’re listening any AC/DC song.) However, most “mixo” songs tend not to be 100% purely Mixolydian. That’s because of the five chord. In pure Mixolydian, the five chord is minor instead of major. (For example, in C Mixolydian, because of that Bb note, our five chord is G minor – G Bb D – which is much less powerful than G major.) So many artists will either ignore using a five chord altogether or they’ll fudge it and use a dominant V chord.

One example of this is “I Can’t Explain” by the Who, which uses the standard mixo I-bVII-IV progression for the intro and verses, but then switches to major for the refrain (I-vi-IV-V).

In fact, it’s hard to find Mixolydian songs that use the v chord at all. One nice example is “This is a Low” by Blur. (Although even this song isn’t “pure” mixo since it makes frequent use of the flat-VI chord.)

Improvising over Mixolydian chords can be a blast as you get to use one of the more interesting — if at first overwhelming — scales in music: the hybrid Mixo-Dorian Blues scale, which combines three great scales in one.

So when you’re improvising, you can use any of those notes and it’s going to sound great (very Jerry Garcia). But most musicians playing music influenced by the blues will tend to want to use the flattened 3rd note. Enter the Dorian mode.

Dorian is the same as Mixolydian, except it’s a minor mode, rather than major.

Even though Dorian is a minor mode, you can play it over the major chords found in Mixolydian. A nice example of a song that uses a combination of Mixolydian and Dorian is “Dear Mr. Fantasy” by Traffic. (You can hear that flat 3rd note in the song’s most famous lick.)

But we’re not done yet. Blues and jazz musicians know they can use the hexatonic Blues scale over Mixolydian chords. The Blues scale is similar to the pentatonic scale, except it also includes a flattened 5th.

The nice thing is, when improvising over Mixolydian chords, you don’t have to choose Blues or Dorian or Mixolydian, you can combine all three into one mammoth, nine-note scale:

You’ll sometimes see this scale called simply the Mixolydian Blues scale, as you can create this scale with just the Blues and Mixolydian scales, but I prefer Mixo-Dorian Blues because it helps you think about how to approach using it.

If you try to play the MDB scale the way you do any other scale, you’ll soon get frustrated. But if you think about switching between the three scales as you perform (start with Dorian, go to Blues, then to Mixolydian) you’ll have much more success.

Note: Even though the MDB incorporates the Dorian mode, it’s hard to play that major 3rd from the Mixolydian mode over Dorian chords. You can easily play a minor 3rd over major chords, but it’s much more grating to play the major over minor.

So, queue up a nice Mixolydian chord progression and try it out. You’ll see why guitar masters like Eddie Van Halen, Angus Young, and Duane Allman all loved Mixo-Dorian Blues.