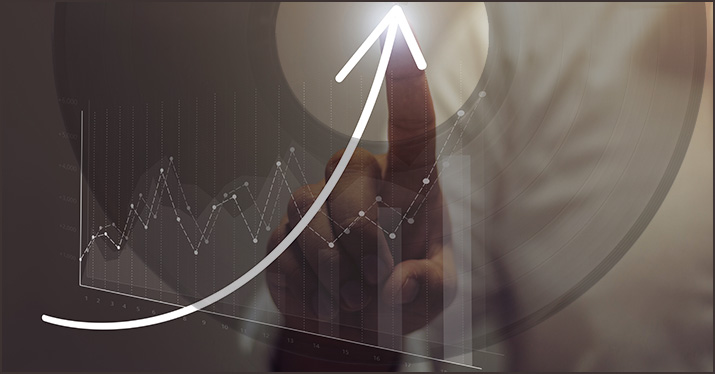 With the explosion of music streaming, physical media appeared to be out for the count. However, the majors are now reporting physical music revenue growth compared to 2018. Heck, even cassettes are making a comeback.

20 years ago, Napster forever changed the way music was consumed, shared, and distributed, and indeed things have never been quite the same. While Napster is (sort of) enjoying its third incarnation (that cat logo might mean it’s got another six lives left), it is telling that its original premise, peer-to-peer file sharing, was thought to be the end of physical media and the music industry as we knew it.

Downloads and digital music files, specifically mp3s, clearly changed the way people consume music, but they turned out to be only the most recent music format to have been relegated to “also-ran” by the lightning-fast pace of technological development in the music industry. The exponential growth of streaming has turned a 15-year music industry decline into an exciting (and reliable) growth story.

With the explosion of streaming, physical media appeared to be out for the count. However, the vinyl revival of the past several years shows the format’s resiliency, and much to everyone’s surprise, the majors are now reporting physical music revenue growth compared to 2018. Heck, even cassettes are making a comeback.

Along with soaring streaming revenue — Sony’s streaming and subscription revenue is up 21.4 percent in in the first nine months of 2019 compared to the same period last year and Universal Music Group (UMG) is up 23.4 percent year over year — Sony’s physical sales of music are four percent higher the first three quarters of 2019 versus 2018 and UMG’s revenue from physical sales in the first three quarters of 2019 is up 14.9 percent over last year.

True, physical sales don’t make up the bulk of Sony’s or UMG’s respective $3 billion and $5.7 billion in 2019 music revenue, but these physical sales numbers ticking upward are an interesting development and a sign that the industry mix of music consumption is not sitting still. And it’s not only the majors who are seeing this phenomenon.

Physical product sales, at gigs and online, are also a staple of today’s indie musician’s revenue stream. And it’s not just CDs: vinyl sales continue to rise, USBs are finding their way onto merch tables, and custom-branded merch is a hot commodity for fans worldwide. This is also true for major artists — at the beginning of this year, Universal’s merchandising arm, Bravado, purchased rival Epic Rights, and UMG’s merch sales for 2019 are up 82.4% to $375 million.

1) Revenue potential. As artists begin realizing how little they get paid with streaming (you need more than a quarter-million streams to earn $1,000 from streaming, a profit number you can easily reach by selling 125 CDs at your concerts), they are starting to look to other formats to help them pay the bills. Three years ago, artists would tell our staff, “We don’t need discs, we’re going to Spotify instead.” Today, we hear a lot more of, “I’m not making nearly what I made before, what can you do for me?”

2) Mementos. As an ever-greater chunk of music industry revenue shifts to live music (i.e. concert) revenues, merch and physical product sales become ever more important. Every indie artist knows that selling CDs and t-shirts is a great way to make a few extra bucks at a gig. The majors have realized this too, and, as mentioned above, have been buying up merch companies like they’re toys before Christmas.

3) Branding. Artists are realizing that physical product does a much better job building their brand than a stream or download ever could. Yes, the instant availability on Apple Music of any song at any time is quite compelling. However, graphics, liner notes, lyrics, and — most important of all — beautiful cover art and interior imagery create a unique statement about who you, the artist, is. Until the digital music companies solve the visual deficiencies of streaming — i.e. the lack of graphics and liner notes — artists will continue releasing physical media.

4) Fans crave something physical. Tool’s Limited Collectors Edition CD version of Fear Inoculum includes a CD, 36-page booklet, download card, and mini video screen and speakers, among other things, and had fans lining up around the block of indie record stores for a $70 package from a band that hadn’t released an album in 13 years! And this physical package made Tool Sony’s largest revenue-producing artist in Q3 of 2019. Which goes to prove that fans, when offered a compelling physical product, will buy it, even at a premium price point.

5) Connection. One aspect of physical media (not just CDs and vinyl, but also t-shirts and other merch) that is only now becoming appreciated by artists is how critical it is to building connections and relationships with fans. The one-on-one connection between band and fan at the merch table is priceless. Once an artist chats up a fan and autographs that CD, they have a fan for life! This is one of the enduring drivers of the renewed interest in physical media and merch.

Of course, we here at Disc Makers have long championed the notion that physical media is the best brand builder — and revenue generator — an indie artist can have. The question now is, how much further will physical product revenues grow? Vinyl sales have grown at a compound annual rate of close to 30% for the past seven years. Merch is seeing sustained double-digit growth. And CD sales are poised for growth.

For the answer to just how much physical sales will grow, we’ll need to be patient, but we are cautiously optimistic that we’re at the start of a rebirth of physical media in the 2020s.

Tony van Veen is the CEO of DIY Media Group, the parent company of Disc Makers, Merchly, and BookBaby. As a college student, he played in indie bands, created his own LPs, cassettes, and t-shirts, and sold them at shows. Today, he collects CDs and concert t-shirts to support the artists he loves.

Related Posts
How Much Does Streaming Pay?
How to get your music on streaming music stations
How to make more money at your merch table
The importance of merch for today’s working musician
You need to sell merch — here’s why