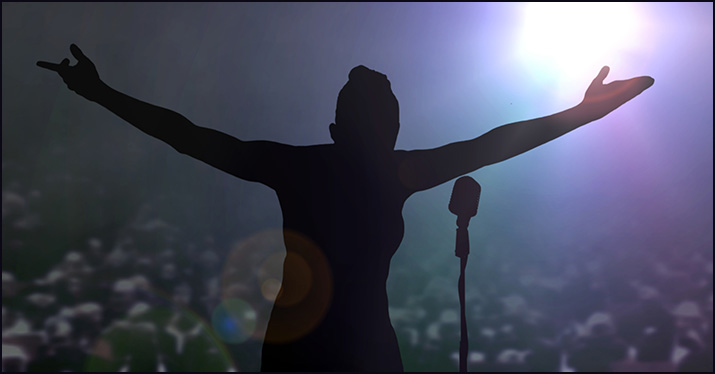 To create a show that packs the house, you have to do more than just play your recorded music live. You have an entire stage to create a spectacle that draws people in and makes an emotional connection.

If you took a video of you or your band performing a live show and played it back with the sound muted, what would it look like? Would you know which song you were playing based on the silent video or do they all look the same?

This is one of the techniques that Tom Jackson, a live music producer, uses to help musicians create unforgettable live shows. Your songs don’t all sound the same, so why should they look the same? Most musicians spend a lot of money and time writing and recording their music, sometimes even hiring a recording producer to help. They know how important it is to capture the best performance and sound. And yet, how much time is spent actually producing their live show? Your audience gets excited by visually and emotionally appealing shows — and live performance revenue, including swag and merch sales, is a key part of your income — so why not spend the time to heighten the impact of your performances?

As Jackson says, “Just because you learned how to play music doesn’t mean you automatically know how to perform in front of an audience.” That’s where a stage show can benefit from a live music producer the same way your recording benefits from having a competent recording producer. To start you in the right direction, here are five insights you can apply to inject your live performances with engaging moments that build a connection with your audience.

What works on the recording doesn’t necessarily work on stage

Your music recordings are made to be enjoyed by individuals or groups in various settings but aren’t necessarily built for stage performance. Not only are you no longer bound by the same time limits on stage, your audience craves an experience that you can only give them by giving the performers room to expand their parts, time to move around the stage, and the opportunity to highlight the most engaging parts of the song.

This means you should rework the song for the stage, and this usually starts with extending it. A three-minute long “radio track” is just not enough time for you to create a connection to the audience in a live setting and the song goes by before the audience truly knows it. They can’t go back and hit “repeat,” so stretch out the special moments and hooks within your songs and emphasize them. Create an intro and build suspense. Ramp up to the big chorus. Highlight the hooks and always be willing to repeat them. And don’t be afraid to break a song down to emphasize a harmony or great hook, because in the end, the song should serve the onstage experience.

Your stage version of the song will create showpieces and moments that elicit emotional responses in your audience that connect them to you. Your fans will appreciate the deeper, extended experience and first-timers will have time to experience your music right there as you play it rather than miss it because that cool part went by just once.

The visuals should match the song

Your stage show needs to direct the audience’s eyes to what you want them to see. Because the members of your audience are not necessarily musicians, they may not know there’s a keyboard featured unless you get the other musicians out of the way and spotlight the keyboard player. When the song builds, the visuals should too, and when the song hits a high point, the musicians should be at their most active.

This also means you need to give the musicians time to move around the stage which includes adding vamps — sections that can be cycled on repeat. Don’t make your guitarist scramble to get to center stage by making her start her solo immediately after the verse. Make it easy on her by creating a vamp and let her take center stage before she begins her solo so the audience knows what to look at. And at the end, give yourselves another vamp to reset the stage for the next part. This lets the audience know where to look and gives the musicians time to structure the stage visually for each part.

Play fewer songs and make the ones you play count

If you only get forty minutes to play to an audience, most musicians want to jam in as many of their songs as possible. But this idea doesn’t take the audience’s perspective into account. You won’t necessarily achieve the connection you’re looking for by playing more songs. Instead, if you use technique #1 above, your live set should be made up of fewer songs with more room to breathe and extend parts that can make a deeper connection with your audience.

Learn how to move onstage

When you’re talking with someone, the words being used are only a part of what’s being conveyed because people rely on tone of voice and body language. You want to use the same principle when it comes to your stage performance. The way you and your band move onstage is critical. Most of a live music producer’s time is spent on how to make the performance match the music and help the audience “see” the music as much as they hear it. If you watch the videos of the top musical performers on YouTube, you’ll find their entire stage performance changes. Most don’t simply stand behind their mic stands song after song.

Note that moving around on stage is not dance choreography. Jackson suggests there are four different ways to move around on stage: walking, running, skipping (think AC/DC), and walking with purpose (walking like you own the stage). You can practice these movements in your living room, but what about when you’re in front of an audience performing and singing? Just as basketball players practice footwork, Jackson reminds musicians they need to practice the fundamentals of stage movement while playing so it works with the music.

If you don’t practice performing as if you were standing on stage in front of the audience and using all the techniques discussed above, you won’t be truly ready when you perform. Major artists don’t leave their performances to chance — all of those seemingly spontaneous moments are actually planned out. And if you don’t do those in rehearsal, it’s unlikely you’ll be able to do it on stage.

If you restructure your live show with your stage performance in mind, you’ll be able to create a killer live show packed with impactful moments for the audience — moments that will emotionally connect your audience to you and create lifelong fans. Set yourself apart from other artists who spend entire shows standing behind their mic stands and make it your goal to get the audience to come back again and again, bringing their friends and growing your following.

4 thoughts on “Work To Create A Killer Live Show”